To cycle the east of Turkey was hard. On the way to the Iran border I arrived to Dogubayazit and I was amazed to see the majestic Ararat Mount, where according to the Bible and also according to the Koran, it is the place which the Noah’s ark landed. To be there and to know about its history was exciting. 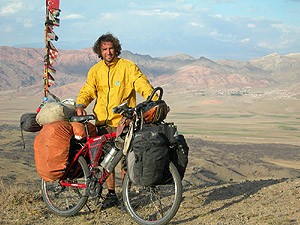 In the last stretch of Turkey I cycled bordering the Van Lake, and it was wonderful, in this area the landscapes are impressive. Then the route carried me until the 2640 mts of altitude, and going down on the way to Dogubayazit I faced up with the majestic Ararat Mount, where according to the Bible and also according to the Koran, it is the place where the Noah’s ark landed.

According to the Koran the generations which continued Adam, the first man on the earth, they adored to an only God, Allah. This situation stayed during centuries, but then the man found difficult to concentrate and to hardly direct his attention to a single invisible God; and so the polytheism was predominant. It was in that time that the sun, the moon and the stars became objects of adoration. The divinity was also attributed to the deceased’s who were in life big devotes of Allah; some people built an image which was conserved at home to remember them. But then they made statues which were reproducing and placing in all type of places, houses, business, places of adoration, etc.; although the people still knew undoubtedly that those statues were compassionate people’s figures which could not grant neither to benefit in anything. But for the following generations the concept was losing temper, attaching to them in a very special way. They looked at them with a particular respect, they kissed them and they worshipped them. Like this the time was happening and from generation to generation this practice was continued, until people passed definitively to adore these statues directly, so the idolatry began in the world.

According to the Koran, with the decline of the monotheistic religion, Allah began the sending of prophets. Noah was the first messenger sent to the people of Banu Rasib who lived in the Mesopotamia, territory between the Tigris and Euphrates Rivers, today Iran, Iraq, Kuwait, etc.; and his mission was to show to his people the right way to return to God, because its moral and spiritual situation, was simply chaotic. According to the Koran, Noah spent 950 years calling to his people for the true religion, but except for a very small group of people, they didn’t accept him; the main rejection came from the rich ones and of those more influenced socially, being justified that their parents already adored those idols and that they followed their steps. Also according to the Koran the Noah’s wife and one of his children were non believers’.

So Allah instructed Noah to build a big ark which takes refuge the believers and the animals that seeks to save of the punishment dedicated for the non believers. Finally in the first day of Rajab (the seventh month of the lunar calendar) the ark was ready, and seeing the first sign like it had been announced him; effervescent water springing from the land, Noah received the Allah order and he called to the ark to his family, to the group of believers which was approximately about 40 and also to a couple of each existent animal species, excepting his wife and one of his children to be non believers. According to Allah: “the non believers didn’t do part of his family, because of a prophet is considered the believers’ father.”

When the Flood finished the ark landed to a called place “Al-Judi”, name well-known in Arabia which corresponds to the Ararat Mount. The mount, of more than 5000 mts of altitude, covered with snow, it has been permanently explored by archaeologists and investigators, with the hope of finding some old craft, but only were discovered wooden fragments whose type doesn’t correspond to none of the existent trees in the area. The wood is coming from trees which exist in the Mesopotamia, from where according to the tradition, Noah was native. These fragments look to have been cut more than 4000 years ago.

Contrary to The Bible, The Koran, doesn’t mention a Universal Flood, nor makes reference in the time. Neither makes mention the duration of the Flood or the measures of the ark. It only relates the fact.

It doesn’t already matter if Noah’s woman and one of their children were believers or not. To harmonize both versions one can interpret that Noah perhaps had been two women, a faithful one and believer who was saved and another unfaithful one and non believer who was punished. Among the Muslims it is said that if a woman opposes to her husband in religious questions, being he in the right way, she will have as punishment to resuscitate in Noah’s woman company.

But I think that it is not important to enter in particulars how the Bible and the Koran tell us the fact, but what they tell us. For it, to visit Dogubayazit and to be in front of the Ararat Mount was not as being in any other place. 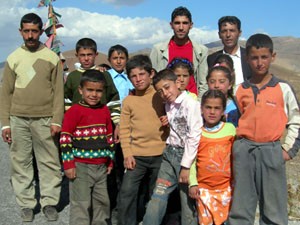 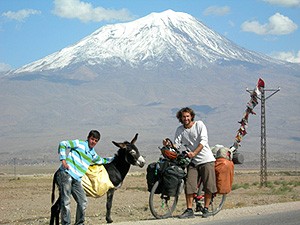