The west of Austria is the area fewer populated of the country, there, it still expands the mountain range of The Alps, that has a lot of ski centers, one of the main tourist attractions of the country. And to cross this area by bike was not easy at all. 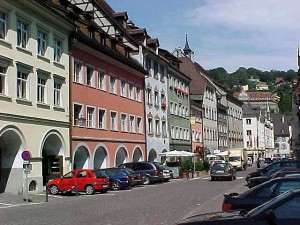 I entered Austria through Bregenz and then I went to Feldkirch skirting the river Ring. It was 5 p.m. and I hurried because if I arrived that same night I would get a place to sleep. It would be in a friend parents’ house, they would be waiting for me and they had also promised to receive me with vegetarian food, which is my favourite one.

But something was wrong, almost at night, after cycling 108 km, I arrived at the house, rang the bell and I waited. Nobody came out and then I thought that the owners of the house could have had some emergency and I decided to wait for a while. When 30 minutes passed I resigned my vegetarian food and I took a kebab (Arabic sandwich) which I found in route to downtown. At 11 pm, I decided to play my last opportunity and I returned to the house, but the lights were out, then already disappointed, I went to a camping site, I put up my tent and I went to bed.

The following day I knew that they had misunderstood her daughter, as they weren’t waiting that night for me. But it is not the fist time that this  kind of thing happens to me: arriving to a place and believe that somebody is waiting for me and I end up alone.

In route to Innsbruck 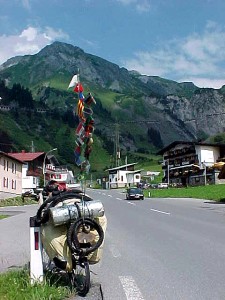 The west of Austria is the area fewer populated of the country, there, it still expands the mountain range of The Alps, that has a lot of ski centers, one of the main tourist attractions of the country. And to cross this area by bike was not easy at all.

In France the freeways are marked with blue notices and the national routes in green; in  Switzerland it is the other way around and here in Austria is like in France. The certaing thing that I was dizzy among so many notices and more than once I finished entering in the freeways, but I returned at once: if the police caught me there, they would charge me with a fine in that moment, and fines are not cheap.

These countries are not as Spain, where there are national routes wherever you want to go. Here there aren´t and you are forced to enter to the motorway, where you must pay a toll. Of course, the normal thing is to move in four wheels. But in this country, if you don´t go through the motorway you must go through a lot of short roads that pass among the towns, and they are so difficult to find. And people don´t help a lot, when you try to be closer to somebody, he/she goes. How difficult was to travel in these countries!

The first 25 km were normal, ascends and lowers without big complications, the next 40 a nightmare, endless ascents without breath, with tunnel included and the route under construction, I knew that as people had told me and I also knew that it was not going to be easy. But the sad thing was that when I arrived to the top at 1800 mt and I began the slope, just for a couple of minutes of delighting with the cold wind in my face among exciting landscapes with snowed summits, I listened to a strange noise in the bike and I stopped: a ray of the back wheel has cut and I didn’t have a spare part of it.

Without many options to choose, I loosed the back brakes and I resigned to go down in little speed to the first town that was at 5 km, with the front brakes tight, and praying because I didn’t want the cable cut.

I arrived at a house of bicycles at 6.10 pm, but the shop had closed at 6 pm sharp, and one of the women that was inside, saw me and she made me a sign like saying:”I’m sorry, we have just close, come back tomorrow”.

I sat down at the door of the shop to see if she changed her opinion; but it didn’t happen. The woman was as strict as a school Head and as the day was good and there were several hours for the night, I decided to continue lowering and going on, although it was in little speed.