I entered to Belize very happy, not only because I was just about to start to get into Central America at a faster pace, but because I was travelling accompanied by Fran and Juan, they are quite some characters

I entry Belize from Quintana Roo, Mexico. I was happy not only because I was just about to start to get into Central America at a faster pace, but because I was travelling accompanied by 2 Argentinean.

I met Fran during my time in Australia; he also travels the world by bicycle, although in a different way than long bike tour travelers. Fran travels since 2008 but he doesn’t know exactly how many countries he has visited, nor how many kilometers he has pedaled, he does not carry a photographic or video camera and he has not a web page not even a travel journal. The guy travels so free and light that is admirable. He starts from Spain with little money and a Didgeridoo that he plays at the streets to get donations; he also worked as a Pedicab in Australia, doing Street Art in Southeast Asia, selling macramé bracelets in Japan and harvesting cherries in Canada.

The other Argentinean is Juan, an anthropology student, ex government employee, and now a Jeweler, that lands in Mexico searching for a radical change of life just a few months ago. There he met Fran and a few weeks later they made a deal: Juan will introduce Fran into the technique, and jewelry design and Fran will do the same in the long bike travels.

This way and also wanting some action on this new stage I join them on this adventure that will take us at least to Nicaragua, but as long as we handle it of course.

I must admit that in 12 years travelling, I have never met two so precarious travelers.
Fran got just 100 USD, and had his bicycle crying for parts replacement. While Juan with just a little more money than Fran and a $ 65 USD bicycle purchased at Chiapas Mexico. And both sharing tent, towel and also the fork to eat spaghettis. For the first time during my travel I felt as a long bike tour professional traveler.

It took us 4 days cross this tiny Country, of which we knew very little. Belize is the only country in Central America where English is the official language, but also the Belizean Creole is spoken, and Spanish a few less. This country has a multicultural society, of African, European and half-caste origin, and has a population of 300,000 inhabitants. Belize gained their independence from the United Kingdom in 1981, country of which it inherited the political, parliamentary and legal system.

Queen Elizabeth II, represented in the country by a General Governor, is legally the queen of Belize the same way it happened with the other 14 member states of the Commonwealth kingdoms. She is also present in all Belizean Money Bills.

During our short stay at this country, we were greeted by an evangelical priest, and a couple of African origin families. One of them, welcome us on the outskirts of the capital city: Belmopan, with a very delicious barbecue and amazing warmth.

We felt as if they were the best living people there, it was a huge family; grandparents, brothers, cousins, that in harmony fill up a whole neighborhood. As a joint project they worked in a camping opening on the route that connects the Caribbean Sea with San Ignacio ruins located on the border with Guatemala.

The other family that welcomes us, half caste origin, was very kind also, although they only emphasized on security issues the country has. The lady owner of the store, who sells us the food for our dinner, let us put our tents on the small and messy garden of her house, beside de coop. That night she tells us how her son was mysteriously murdered in Belize City. 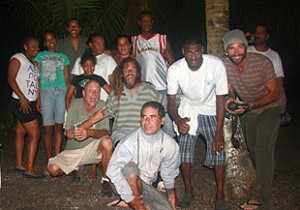 The evangelical priest adjudges that the idle way of the black people generates violence, due to supposed subsidies the government gives them. He also mentioned the gang groups that lives in the country.

Fortunately the memories we keep of this little country is not the violence that we heard a lot , but that day that by chance we hit the 50 km spot of the western highway where we were welcome with coconuts, rum and a nice reggae.