Bolivia, one of the greatest challenges

From “Uyuni” my path continued throughout one of the most breathtaking views on the planet, “El Salar de Uyuni” and “Reserva de fauna andina Eduardo Avaroa”. To get into this 500km that extends between 3600-5000m above sea level, with temperatures as low as -15°C, has been one of my major challenges. Despite the roads have been insanely rough, where you regret, fuss, yell and cry, undoubtedly the effort was worthy due in such trip, intense sensations come alive and reaches your soul.

I got to Bolivia via “Puerto Quijarro”, on the Orient, a hot area and very dry, based on plains and scrublands. Is a forgotten area in the country, in which only few years ago the main road was sealed connecting limited and tiny populations who live on unsealed streets. Cycling here made me feel like being back in Africa, due the suffocating heat, distant populations and the precariousness people live under.

One day, after 75km of cycling, I stopped at the midday over a population of no more than 10 houses and a bar which only sells beer but not food. So I took my oven and cooked while chatting with Yawar, the bar owner who has indigenous countenance. I enquired him about the development and life conditions in Bolivia. He replied: “Bolivia is the second poorest country in South America but since the government of Evo which is in the power since 2006, the economy grew considerably, extreme poverty reduced 20 points, a total coverture of basic services have been created and hospitals, schools and roads have been built. Bonds for retired people, students and children have been implemented. Also during Evo’s government, biofuels have been nationalized and a first satellite was launched. In the last few years, this country had a greater economic growth considering the region”. All this said, he stopped proud and commented me that not far back in time bolivians rode donkeys.

During my tour through Bolivia, in each visited village, I realized that even the smallest one’s have besides its  schools a countryside or courtyard to play sports and also a health center. Blessed Evo and God, I don’t know what it would have happened with my friend Fernando, when he smashed his head the dumbest way with a steel pole in a spooky village. Luckily, at that place there was a health center where he had 11 stitches.

Fernando arrived from Buenos Aires, for a couple of weeks to join me on going to communities of Mennonites in the west region of the country, where he has been months earlier with the goal of managing my visit to the place.

Once here, we went to “Manitoba”, a community where over 300 Mennonites families live. The place looks like from another world and to get here was like taking a trip back in time due its inhabitants live isolated, are not interested in development, they use sulkies pulled by horses as transport, there is not internet, television nor cell-phones. Barely there is solar energy. They all are blonde and are dressed identically. Woman wears long dresses and hair braids, on the other hand, men wears overalls and hats.

They all have their houses with a thorough lawn, cattle and roughly 50 hectares of land. Most Mennonites are farmers and stand out mainly for producing cereals, fruits and vegetables, some of them have agricultural machinery. This Manitoba community also counts with a cheese factory, a school and a church. “We Mennonites are a religious group followers of Menno Simons, a religious Anabaptist lider, one of the religious current that exists in the Protestantism. Religion is the source of our families and community”, explained  Abraham, our host who received us along with his wife and 4 of his 8 children.

From “Santa Cruz”, now by myself, I continued my trip towards ”Sucre” through a route that sometimes is impassable. The road from “Saipina” before “Aiquile” is a dirty road and it crosses some mountain passes that overcomes 3000m above sea level, impossible to get through it cycling a bicycle weighting 90kg in total and considering the road is damaged and under construction. Only option is to walk. On the other hand, the road from “Sucre” to “Potosi” and then to “Uyuni” is sealed but it has steeps of up to 20km that overcomes 4000m above sea level. But the real obstacles are the cold weather, wind and distances between villages to get food.

During those days I started chewing “coca”, that as Bolivians believe it helps to overcome high altitudes, suppress fatigue, hunger, thirst and pain. The process consists on grabbing a bunch of “coca leaves”, a bit of sodium bicarbonate and put it all together in the mouth between the chin and cheek. The mix of this two forms a “ball “with different properties as alkaloids and nutrients. At first, the taste of coca felt horrible but after a while I got used to it because is useful.

From “Uyuni” my path continued through one of the most stunning backgrounds on the planet, “El Salar de Uyuni” and “La Reserva de fauna andina Eduardo Avaroa”. To get into this 500km that extend between 3600-5000m above sea level has been one of my mayor challenges because the road is not exactly a road but a print left by 4WD that bring tourists daily through sandy and rocky roads, impossible to cycle. With a bicycle of 90kg in total that has to be pulled not less than 100 times per day. That is why in each mountain to reach it cannot be done faster than 3 to 4 km/h to an average of 30km per day. A nightmare to whom is not prepared psychologically or is well equipped. On top of being in good shape, know the technique is also key.

The question is how to bring enough food for the 2 weeks trip but also to take water. Well, the secret is to pray to the vehicles that pass by to stop and hand you over water. They do stop because as in the “Gobi Desert, Mongolia”, in this extreme regions of the world people are willing to help. You could die here.Also you become another attraction for tourists that take countless photos. To pose and smile for their shoots is a price you have to pay to get water.

To take and ration food needs much more organization. It is about knowing how to buy the necessary, rationalize it, pack it and send it through a tourist agency to set places along the trip. In my case, for 4 boxes I chose two companies: “Tito Tours” and “Know Bolivia Tours”. Lucky me, they did not fail. This way I bought 25kg of food and each box I have received was happiness to me.

Another obstacle was the weather. During the day, cool front winds which goes south west to north west has been a nightmare. Started blowing from10-11am and stopped only at night. It got as deep as into your lungs. As a result I got a strong throat pain, cough and cold, which I overcame with Vitamin C, propolis, honey and anti-inflamatory.Cold weather also cuts your lips, your nose tip and hands. I was wearing gloves that were not for this climate. I had up to 30 cuts in my right hand; many of them deep because each time I opened the panniers zip they bleeded and got deeper. My right hand hurt a lot and once this trip was over I barely could move it. As I could not use any healing product, bolivians recommended me to lubricate it with oil.

The region south west of the country is unique in views; here is not only the biggest but also the highest salt desert of the world with a surface of 10.000km2. Views are gorgeous and it varies between the day or night light. The “Reserva de fauna andina Eduardo Avaroa” holds colourful lagoons, volcanoes, geysers and thermal water. The region is a world wonder. 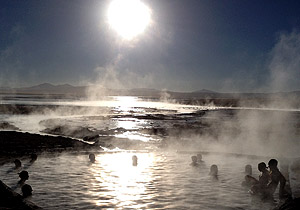 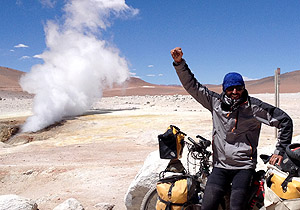 Probably, from a 4WD the beauty is not worse but you do not suffer like on a bicycle, not even close. But to cycle this region alone is like injecting a dose of adrenaline direct to your senses and despite it is a huge challenge because you regret, kick, yell and cry, the effort is worthy because in such trips intense feelings come alive and touches your soul. Leaving this region, charged with this energy fulfils you of happiness not only because you have done it, but also due you are ready to go to treat yourself in a hospital…