Bosnia and Herzegovina is a multicultural country, but here the concept of being Muslim is not as radical as in other countries. The important thing is the Islam rules. To be Muslim doesn’t mean that the women have to be covered and that everything is an imposition, because the Islam is an election, Faruk said to me.

The beginning of another stage 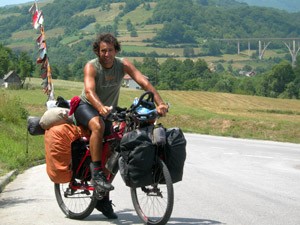 After two years of living together with Clara, we had to separate. We didn’t want to do it, but we believed that the best option was to stop of travelling together, at least for a time. So, downcast as never I was, I left Italy, and although I didn’t have strength to follow the trip, I cycled as I could to Ancona. And then, I took a ship to Croatia.

In the next morning I disembarked in Split, the same city where I had been 3 years before, but how different it was this time. It was the beginning of the European summer, so the heat and the mountains hindered the beginning of this new stage.

In spite of the fact that I had not slept well I chose to leave the city that morning; so I began to cycle to the south. On the noon I stopped in a bar to make a pause, I was tired and very thirsty. At once that I entered I went to ask the price of a big mineral water, but the girl who worked there, said to me that she had only in small size; for this I preferred to ask her a glass of water, but in a very despicable tone she told me: “It is not possible”

Truly that I no longer remembered how wretch the people can be when talk about money..

The Croatia coast is very beautiful, the route which skirts it, is a totally up and down; and their caches with the turquoise sea resemble to a paradise. But Croatia is not a cheap country, in spite of the fact that it is not member of the European Union, it has prices as if it is part of it; and it would seem that in high season due to the great flow of tourists everybody want to earn much more. For this I didn’t spend more than two days to leave the country.

When I decided to travel through the Balkans, I had very little knowledge about these countries, and for this I didn’t have idea how would be to travel through the ex Yugoslavia. When somebody spoke to me about Bosnia, I imagined to a poor nation which was recovering of the war, with United Nations soldiers along the country and with several places where still exist mines; “take care when you camp” people said to me several times.

In February of 1992, the people from Bosnia and Herzegovina decided in referendum their independence from the Federal Socialist Republic of Yugoslavia (today Serbia). It provoked the Bosnia war which caused near 300.000 victims and 2,5 millions of displaced. In December of 1995 the Serbian leaders signed the suspension of hostilities and the war finished officially with the signature of the Dayton Agreements, which settled down in the country of Bosnia and Herzegovina, two completely autonomous entities, each one of those with its own government and National Assembly: The Federation of Bosnia and Herzegovina, (which is integrated by areas of Bosnian and Croatian populations) that occupies 51% of the domestic total territory; and the Serbian Republic with Serbian population which occupies 49 % remaining.

For this, a narrow relationship also exists between ethnic group and professed religion, so there is 40% of Muslims (Bosnian), 31% of Orthodox Christian (Serbian) and 15% of Catholic (Croatian).

But today although Bosnia and Herzegovina still has sequences of the war, I didn’t find it as a poor country. Along my entire journey for this country I noticed that each one of its inhabitants has his house and they are not small, and also his land with different cultivations. The country is very green and in spite of the fact that it has only 20 km of sea coast, there are a lot of rivers and for this exuberant vegetation.

So I cycled to Mostar, skirting the Neretva River, but how cold its water was, when one afternoon with a temperature of 40º I decided to swim a little. 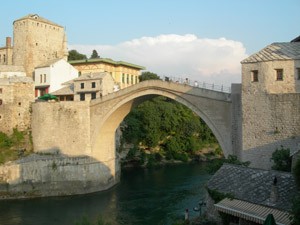 Mostar is a city of a little more than 100.000 inhabitants and according to people explained to me it is the Humanity’s Patrimony. It takes the name of the old bridge which has always been considered as an entire symbol for serving as union between the two cultures in that the city is divided; the Croatian Catholics to the west of the Neretva river and the Muslims to the east. At the beginning of the warlike conflict in Mostar, Croatians and Muslims allied to expel the Serbians, but once gotten this objective, a new fight was declared between Muslims and Croatians to take the power of the city. During the war, the bridge was destroyed, collapsing this way an entire symbol of the coexistence between cultures, of which the city had always been a clear example.

To my arrival, I was lucky because I met Role who rented me an apartment with two rooms and with all the comfort to a very moderate price, “it is only for you”, he told me. I could not believe it, “an excellent place to rest and to cook”, I thought. But at the second day when I return on the afternoon I meet a couple of tourists who were resting on the other room. The place was still comfortable for me, but I would have liked that Role says to me in a clear way how he works since the beginning.

Mostar is a very beautiful city, with mosques and churches, with several bridges and with its stone streets, and everything in a medieval atmosphere, but I found its people not very friendly.

I left Mostar heading for the north, still skirting the Neretva River, for this the route was flat; and when I arrived to Konjic I stopped in a small shop to buy some food for camping, but when I wanted to pay the guy in a broken English said to me: it is free, it is my present, take it”.

The route to Sarajevo was difficult, because I had to cross a mountain of 1100 mts high, and it was 10 km in a constant ascent, but after a slope up comes a slope down, and it was sublime.

The arrival to the capital city was slow and it was too hot. It was midday and another long ascent demanded me before entering to the city, but once there I stopped to rest and I met Dejan, a very curious laws student who invited me with a lunch.

Then I contacted Faruk, who received me in his house during my stay days; but also Damiane and Delfina were in his house, a French couple who was travelling around the world in a tandem bicycle; they took two years in their journey. And I was surprised when they told me that Argentina was one of the nicest countries that they visited. We were together two days, then they continued their trip to France. 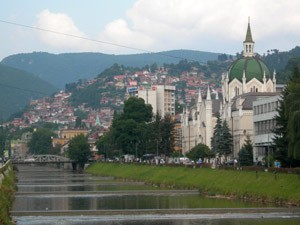 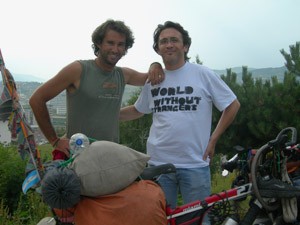 I knew Faruk through a traveller’s internet site; he is a journalist and he was in charge of my stay days like a real friend. We went out several times, he introduced me to his friends and we also went to eat typical Bosnian food to alternate our talks about the reality of the country.

According to he explained me, Bosnia and Herzegovina is a multicultural country, but in his country the concept of being Muslim is not as radical as in other countries. “The important thing is the Islam rules, as to pray daily or to respect the Ramadan, among other things. To be Muslim doesn’t mean that the women have to be covered and that everything is an imposition, because the Islam is not more than an election”, he said to me.

My days in Sarajevo were more than a pleasure, the chats with Faruk lasted hours, we have talked about the war, the socialism, Tito, and about religion; and everything was interesting, and although I could not rest too much as I hoped, I left the city as if I had done it, because little by little I started to feel good with the trip again. 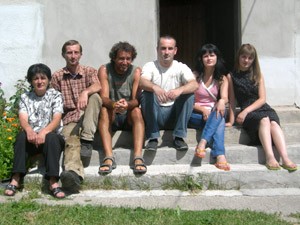 That afternoon my cycled continued going up. Then, after few kilometres I had to stop and to take shelter under a roof due to the rain. Suddenly an about 50 year-old woman called me to her house to drink a coffee, it was very funny because we didn’t understand each other. So once there, I drank a coffee, then tea and then she served me the dinner. And that night I slept in her house, and I was lucky because her daughter spoke fluent English, and we could to communicate. The following morning, they didn’t want that I leave, and truly the place was very pretty, with big mountains around and in that simple house with a very warm family who assisted me all time. I was like in a hotel.