“During the communism we had the manpower most expensive of the world, because for lacking of manpower in the field, doctors, engineers or different professional were called for working the harvest”, the Borislav father told me.

After crossing the border between Serbia and Bulgaria, I cycle going up between mountains for more than one hour. Then I arrive to a huge valley, located to 550 mts of altitude, which I cycle up to the capital city, Sophia. I really feel the sensation that I am in a South American city, because I see a careless and dirty city, with many children washing the car’s windshield in different corners; and with so many people searching for something on the garbage as many dogs which bark me and run me. The weather is cold and it seems that will rain. 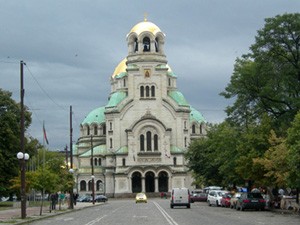 After some days I understood that the cloudy sky of that first day was announcing me about how my stay would be in that country. Gray, completely gray.

When I arrive I meet Borislav, a computer science’s student who stopped the University for working in the programs of a video game. “We are 42 people who work for a project financed by a shipping company”, he told me. According to him it is the kind of net game in which one can play to do what you want. Borislav hosted me in his house and because of he lives alone I stayed in his living-room. Taking advantage of his generosity, at once I asked him for a dentist, and an hour later, I was already visiting one. The following day I had to do a x-ray and then I returned to the dentist who said to me: “you have two options; you fix your tooth what will cost you 130 Euros or you pull out it and you pay 30”. So, I preferred to pull out it.

The first days I ate lentils all time, I looked through the window and the sky was almost always covered, it seemed winter. But for that moment I already was in the Nelly’s house, a girl who I had also contacted through internet. She is a fashion designer who had been studying and working outside country but in her country she was looking for a job. I stayed 5 days in her house, waiting to take out the stitchs, with my swollen face and with a strong pain. But I suffered much more when my third dentist, (the only one who had the courage to pull out my wisdom tooth), notes a maxillary inflammation after taking out the stitches and she says to me “this is for surgery”. I could not believe it; I had entered for a cavity and she talked me about a maxillary distortion.

After days I understood that that distortion was an inflammation, and that it was the result of her work too. Those really were difficult days.

During my stay I also had dinner with the Borislav parents, they cooked Bulgarian typical food and we talked about my trip and about Bulgaria. As they explained to me after the Second World War, Bulgaria influenced by the Soviet Union became a Popular Republic. “Those were difficult times”, they told me. “With the communism there are not social differences and for this reason everybody had the same level of life, also education and health; but there was not way of progressing. For more than 20 years we lived in a flat of 50 square meters, and for it we could not have more children. We had to request permission for everything; to find another apartment was necessary to be registered in a waiting list and to wait. But we were never called. It was the same to buy a car, if you had the money, you also had to be registered in a waiting list and wait at least 7 or 8 years.”

They also told me that because of there is not difference among people, people don’t want to work and make progress because of the state is the only one owner of everything. “During the communism we had the manpower most expensive of the world, because for lacking of manpower in the field, doctors, engineers or different professional were called for working the harvest”, the Borislav father told me. They also told me about how difficult was when the communism ended, when everybody wanted to take as much as they could, and to any price. It was the origin to mafia’s groups and also to large delinquency. For it, many people became rich.

The Borislav father explained to me, that with the end of the communism he stopped of working in the factory where he used work, so he began to work by himself fixing the interiors of apartments. And he believes that he was a luck man, because of people like him were not qualified to face the new labour reality.

Since 1989, with the communist government’s fall in Bulgaria, international companies arrived to the country. The property market in Sophia has increased quickly, reaching to a growth of 100% between 2005 and 2006; and also the number of cars in the capital city has exceeded the million. A real success for E.U.; but Bulgarians don’t still experiment what is to get in debt with the banks during 20 or 30 years, like many people in the west.

During my stay in the capital I was around the city centre and I noticed that here the religions cohabit in a peaceful way, because of a mosque; a synagogue and a church exist to only few meters among them.

I left Sophia toward the south, to the turkey border, cycling through the freeway, the only exit road of the city, or at least it was what I understood from its people. It was very difficult to request information.

Then for a secondary route I kept cycling, they were 300 km in almost 3 days, with a gray sky and always with rain back me. And how many strange places I saw; it seemed no man’s land. I have crossed ghost towns, of those that I preferred to go away to camp. I also stopped in some towns to buy some food, but I had very little contact with people, only a couple of times I talked a little with local people, when on the road I bought some fruits.

So, in a silence way I left Bulgaria, with the gray sky, with a tooth less and with the idea that its people are rougher than strange.