That night in Cyprus we were afraid. I was completely immobilized, it was a shouting and I didn’t understand anything. I thought about Clara, about the bikes and all our things. But everybody wanted to punch me.

When we were in Beirut, Lebanon, we knew two Cypriots who several months later invited us to Cyprus with two free tickets through the cargo company in which one of them works. So from Israel we disembarked in Limassol, the most important port in the island since 1974.

There we met Nectaria, a Cypriot girl who received us in her house with her son of one year old. Nectaria had also travelled a lot and many times as backpacker, for this we understood each other immediately. 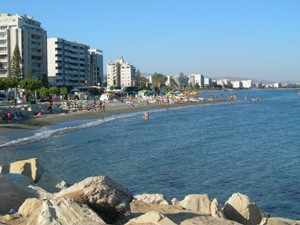 Limassol is a city of 200.000 inhabitants and one of the main tourist points of the area where many tourists from the north of Europe arrive, although its beaches are not the nicest. For it after some days we went to Larnaka and to Agia Napa, two tourist destinations with better beaches. There we stayed in hotels which had an accessible price for not being in high season. We also visited different beaches and some impressive caves; and taking advantage of the tourists I produce some money with the sale of my pictures and the dolls.

To cycle the Cyprus Island was more than a walk, the distances between towns are not big and its routes don’t have big slopes, but the most beautiful thing was to cross the small populations and to camp next to them.

So, after a very calm cycle, we arrived to Nicosia, the capital city.

Historically Greek-Cypriots and Turks have lived together in the island for centuries. But in 1974 a pro-Greek coup d’état deposed the legitimate government, what caused the reaction of Turkey who 5 days later invaded the northern third of the island. So thousands of Greek-Cypriots were stripped of their houses, without having time at least of loading with their things. This is the origin of the Turkish Republic of the North of Cyprus, a state that is only recognized by Turkey and the Organization of the Islamic Conference. So, after the fall of the Berlin Wall, Nicosia is the only capital city of the world divided by a wall, with the parts south (Greek) and north (Turk), separated by the “Green Line”, a demarcation line controlled by the security force of both sides of the island and for UN troops.

During our stay in the capital city we stayed in the Turkish size and one night that we crossed the green line we lived a very bad moment. At that night, the 33 years of the Turkish occupation was commemorated, so there were almost a hundred of Greek-Cypriot demonstrates in the frontier. But we didn’t have idea about this and we crossed the border with our loaded bicycles among everybody. And we didn’t become aware of the 51 flags that I have in my bike, representing all the countries that I visited. It was a damned misfortune, because on the top flamed the Turkish flag and it was one of the newest and it shone. So only to some meters of the frontier somebody robbed me one of the masts with its 16 or 17 flags that it has, including the Turkish flag. But I didn’t realize, but Clara, who cycled behind me did it. Suddenly I heard her shouts and I saw her, who in a very Latin way, pursued to the guy who hid among the multitude. I needed one second to react, to leave my bike and to run him. But when I grab him by his arm, 15 or 20 hands grabbed me and shook me for all sides, like to a puppet. I lost the notion of everything, it was an uproar and I didn’t understand anything. I thought about Clara, about the bikes and all our things. We struggled during a couple of minutes; I was completely immobilized, under all those looks which threatened me to break my face in any moment. And I was afraid. “I am from Argentina, I am cycling around the world”, I shouted. Finally the Greek police who watched the show to only some meters intervened. They grab me and removed me. But I insisted on recovering the flags. Then they carried me to the green line, where UN soldiers were. Seconds later I saw Clara that rescued my bicycle among the multitude. Then a couple of guys threw us the Clara’s bicycle and minutes later a policeman who already knew us brought me the mast with the flags, although the Turkish flag lacked.

After some days we moved to the Greek size to try luck. There we contacted the General Manager of Nova, the Private Cable Television Systems which a couple of years ago had sponsored me in Greece. But I had to write to an old friend from Africa before, who along my trip in the black continent, sponsored me with Multichoice, the South African company which is the owner of Nova.

So we met William, the responsible of Nova in Cyprus. And he surprised to know about my bike tour and that his friends had sponsored me in several occasions. For it, we didn’t take time to agree a new sponsor during our stay in the island. Then with our first sponsor and several media waiting for us, Clara and I went to Coca Cola, where at once we could speak with its Director and after few minutes we got our second sponsor, with one of its more important products, the Lanitis milk. 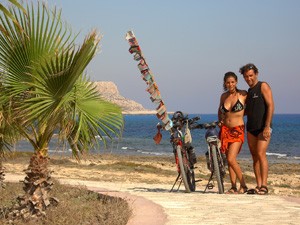 Then we carry out the press; we were interviewed by the television, by the most important newspaper in the country and by other 3 weekly magazines. So, for the first time in our entire trip, Clara and I got in a fortuitous and simple way the economic support to continue for a good time our trip. And due to the whole press, we left the island like two true famous.

A stop during the trip

When we left the island we had two options: to follow trip toward the Persian Gulf and to go far away, or to return to Italy and to visit our families. Undoubtedly it was not easy to choose, but we opted for the second choice. For it, we returned from Turkey to Italy by ship and we went to Sicily and then to Parma. There, the winter forced us to settle a little and to change those sunny days and nomadic life for a vulgar and more comfortable routine. But it also was nice, we had our own apartment with sofa, television and an oven. I also took advantage to travel to Buenos Aires and to visit my family, which for the first time in 7 years, was complete.

Once more in Italy I returned to Clara, and together to a planisphere we began to think about the next years of the trip. The route is clear; the rest is to be written.