When I arrived to Dar Es Salaam I met Graciela, an argentine woman who had been living there for several years. I remember the first night she invited me over to some gnocchi. Delicious!

Chatting with her I noticed that, during my travel, I was forgetting about how careful I had to be here in Africa. Lately, I was drinking water from wells and I was also eating raw vegetables, quite the opposite to what a doctor friend of mine had recommended me in Maputo.

The problem was that I could hardly communicate with people and ask them for some food or water. In primitive places, how could I explain to those people who didn’t have information about hygiene, what my doctor recommended me to do? I only wanted to eat, not to be the laughing stock.

So I got used to share my meals with dozens of flies; or to eat food that had been manipulated by not so clean hands.

It was then, chatting with Graciela, that I remembered my stomach had been bothering me for three weeks. When I went to the hospital in “Mueda“, north of Mozambique, I was cared after at the reception and they only gave me some hydration salts; I left, feeling calm, thinking that was enough, because since that night at least I could sleep. What a fool I was! There were so many nights I had been twisting in my bed and running to the bathroom thinking I hadn’t digested something I had eaten.

Graciela told me that her husband had been diagnosed with parasites in his stomach. Maybe we are prone to this kind of infection, but the fact is that my symptoms didn’t seem to be cholera or malaria, that was why I wasn’t so worried…although at that state they weren’t normal either.

The following morning I went to the hospital and a nurse diagnosed that my blood pressure was too low. After checking my weight, I realized that I had lost 5 Kg, too.

I felt weak, that was true, but it was only that evening when, after shaving my beard for the first time in a month, I could notice how thin I was. At once I looked up a doctor and told him since when I had been feeling bad and what negligence I had committed.

“Don’t worry“, he told me, explaining that my case was very usual around there, “just take all these“.

I don’t think I was there more than two minutes but it was enough to go out with a list of medications and new hydration salts. I felt calm; I knew that the worst part (north of Mozambique and south of Tanzania) had been left behind. Now I was back in the civilization!

Dar Es Salaam, the ex capital of the country (now it is Dodoma), goes on being the biggest city with two millions inhabitants. Its streets don’t seem to be part of the African continent. In them, most of the people are of Hindu or Arabic origin. 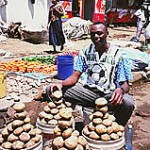 At first sight I could determine two social classes. Those who come from India and Muslim countries are great merchants, they have important businesses, luxurious cars and they wear fine clothes. Then there are the African people crowded on the streets without sidewalks, offering some services or selling some kind of food.

I stayed 20 days in the city and I noticed there is a certain nuisance between both groups. The Africans told me that most of the Indians are arrogant and consider themselves at a higher level. On the other side, an Indian told me that many Africans are lazy and don’t like to work.

Tanzania is a country that, before becoming a German and a British colony, was invaded by different Asian flows. Generally, they traded along the coast, but they also came looking for slaves.

Walking around the city I saw a lot of Muslim churches where people go to pray five times a day. Near the place where I was staying, there was one of them, so my day began very early: at 5 o’clock in the morning I woke up listening to their prayers coming out of the speakers.

Next to the hostel there was a popular market, where they mainly sold fruits, vegetables and pulses, and hens that woke up with the prayers, making me jump out from the bed with their clucking. I still remember them; they arrived crowded together in vans to be put into cages until they were sold, poor hens!

During my stay in Dar Es Salaam I visited some firms to ask them for support to continue my travel. This time it wasn’t in Spanish nor Portuguese, I had to speak in English which I learned when I was a little child thanks to my mother’s insistence.

It wasn’t easy, but good luck is by my side. After knocking on some doors I found those who encourage the fulfillment of dreams, and support the respect for different cultures. Thanks Vodacom, Multichoice and Holiday Inn Dar Es Salaam.