When I arrived to East Timor, I realized that I was in one of the youngest countries in the world. Most Timorese live by growing or fishing; the infrastructure is scarce and many people still lack access to drinking water, electricity or access to money. But the human values, which are protected as universal, gave way to the commercial interests of Big Powers, told me Renato

When I crossed the border to East Timor, I realized that I was in one of the youngest countries in the world, and although I knew few things about this nation, I really felt like I had been there.

The history of this country is not so different from others which I had already visited. Inquire about East Timor was like remembering my time in Mozambique, Eritrea or even Vietnam.

The Portuguese were the first Europeans to arrive Timor in the early XIV century; sandalwood abounded on the island and was used for the furniture and perfume industry. For four centuries the Portugueses exploited the natural resources of the territories for trade, without hardly improving the area’s development. It was not until the 60’s that the capital city Dili had electric light and till the next decade drinking water, drainage, schools and hospitals. The rest of the country, especially in rural areas, remained backward.

With the fall of Salazar’s dictatorship in Portugal, Timor, as well as other Portuguese colonies, claimed its independence, but the ideological confrontation between the Communist World and the power of the Western world took over this little island that barely survived. Thus, with the approval of the U.S. and Australia, Indonesia, which was the main bastion to stop the advance of communism in Southeast Asia, invaded Timor in 1975. (It is assumed that the reason why Indonesia occupied Timor is the large reserves of oil and natural gas that exist in the territorial sea of ​​it.)

The members of FRETILIN (Revolutionary Front for an Independent East Timor) left Dili and other major cities and hid in the mountains and jungles, where they continued the fight. Hundreds of villages were destroyed by Indonesian army and much of the country’s forests were burned. The result was a cruel and brutal genocide of the Timorese population, known as the greatest genocide in proportion to a nation’s population: more than 200,000 people killed when the population in 1975 was estimated at 650,000 inhabitants.

In 1998, with General Suharto´s resignation in Indonesia, his successor Habibie unexpectedly announced the call for a referendum on autonomy for East Timor, while the western part was annexed by Indonesia. 78% of the population voted for independence and although the Indonesia government had promised to respect the results of the vote, which had the backing of UN, pro-Indonesia militias backed by the army massacred and plundered the country. International condemnation ended in sending UN peacekeeping troops in 1999 that established a temporary administration during the transition to independence, which was finally reached in May 2002.

Currently East Timor has more than 5000 foreigners belonging to the United Nations and not less than 300 NGOs working on reconstruction.

The way from the Indonesian border to Dili, the capital city of East Timor was always along the coast, up and down hill, through gravel roads and dry and rocky landscape. The villages are not like those in Indonesia, but poorer. Their houses are built entirely with what nature provides. The roofs are constructed with palm leaves, and the walls with its stems.

The Timorese turned out to be more educated than Indonesian, they are not annoying neither harassing me every time I stopped. They greeted me politely and came close only when I needed. But their faces were more serious, sad, probably as a sequence of the war that many people still can not forget. 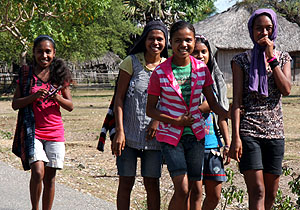 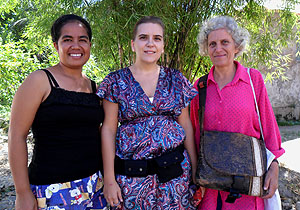 In Dili I was welcomed by Filipa, a Portuguese girl who was the representative of an NGO from her country, which was established in the capital city since independence. Among several works which it carried out, a primary school was built. Filipa was the director of the school which has 150 students and just two classrooms. In those days, Filipa had finally achieved that the school was recognized by the Ministry of Education of the country. The aim of the NGO was to prepare local people and hand over control of school to them.

Although there are many works in the country, during my stay in Dili I have noticed certain distrust from local people, mainly young people, to UN foreigners. Most Timorese live by growing or fishing; the infrastructure is scarce and many people still lack access to drinking water, electricity or access to money. Just recently it has implemented the social security system, which gives a retirement of 30 u$s to everybody older than 60. It has been well-accepted by the population, especially due to the Timorese have always been dealt with the barter system.

“Those who were children during the Indonesian occupation are not old enough to remember or understand the sacrifices made when fighting for independence. They only have seen that their lives have been obfuscated by problematic situations while the international community has great wealth and fulfilling lives”, said to me Renato, the owner of the only bicycle shop in the country.

“With the arrival of the UN and the foreign population prices have been inflated severely and the socio-economic disparity has increased dramatically between the own inhabitants of East Timor. This is a great injustice and it has to be repaired”.

“Support East Timor in the political, economic, social and military fields consolidating it as a country, was a laudable project, but it is always said that from words to action is a long way. In the case of East Timor, the human values, which are protected as universal, gave way to the commercial interests of Big Powers.