Go across El Salvador allowed us to experience as it is lived in one of the most dangerous countries in the world; and meet Edgar who explained how in El Salvador time has shown that myths about dollarization are false.

Leaving the highlands of Guatemala to get into El Salvador. It was during the winter months in the northern hemisphere, but for the locals it was summer, so Salvadorans tend to call the dry season, between December and March , the hottest months when the temperature reaches 40 º.

Fran, Juan and I crossed the border about two in the afternoon, had lunch and rested for a couple of hours on the Guatemalan side, so right away we started pedaling south. I used a fresh long sleeve t-shirt yarn, which I have, and a straw hat, but just had a feeling the sun hit my head like a blacksmith’s hammer. Juan just wearing a black baseball cap, and Fran’s face was covered with a cloth. These two guys are crazy, I thought.

The first thing that caught our attention on El Salvador is that most of the houses and business have to ceiling bars. Even the smallest and most remote shops of tiny villages resemble a fortress. Those that do not, is because they have a uniformed guard with a shotgun in hand. “Here everything closes at 5 or 6 pm, because people are afraid”, Edgar told us, who received us for a few days in San Miguel.

“In recent years, insecurity and violent crime have become a structural problem in El Salvador. And this is due to the development and expansion of youth gangs (or Mara), as they are known in the country. They are groups of mostly young people who have organized to the point of semi-autonomous cells in a national and international level. Their activities include drug trafficking, illegal immigration, human trafficking, arms trafficking, extortion, money laundering, robbery, kidnapping and murder. According to the latest UN report El Salvador is the fourth most dangerous country in the world, behind Honduras, Venezuela and Belize”.

On our way to Zacatecoluca, the town where we thought sleep, we were warned by several people that the 18th Street Gang, had ordered a curfew from 17 pm. Businesses and schools closed from noon. That afternoon we keep pedaling amazement as far as we could. 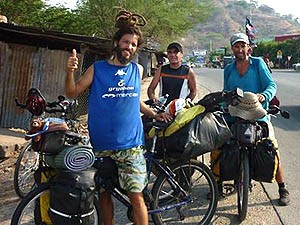 With the last light of day we arrived to St. Augustine, a rural area; and as usual we asked a house camping permit. Faced with almost twenty children and curious adults, we assemble the tents, and then I start cooking. Almost always Fran and Juan do the cooking while I contemplate the night, but that evening for being badly on path, the Rasta man (fran) was hit by a car ahead. Fortunately nothing happened, but the wheel of his bike was completely arched, but the guy is a good mechanic, nothing to do with me, and although not made ​​it, he could keep pedaling. At night Fran again get their hands on his bike and I had no choice but to grab the kitchen with Juan. The guys call me the boss, they say I don’t do anything, but I am the one who does the dishes. I excel a little more by the time I’ve been on the road, to be better equipped, to carry some spare parts, etc. To them I’m a pro. They got lucky when both burst tire, because I had two new ones that had given me in Mexico.

I’m also the one who gets to sleep in the cities, sometimes people who follow me online, or by rating pages in which I am registered; or as happened in Antigua Guatemala, where I got a free room for a week just because the hostel owner had seen me in the paper and sympathized with my trip. So, if in the room there are one or two beds, share the bed or sleep on the floor they are. But not because I impose or make me more rights, but because Fran and Juan insist that I’m the boss.

That night in St. Augustine, when dinner was ready, we still surrounded at least 10 people, children, adolescents and adults. You could see in their eyes they wanted to eat, I could not tell if it was hunger that had or just curious and want to try our dish: spaghetti with tomato sauce and vegetables. But what to do in such a situation? There were too many people, we could not share food with all of them. Besides we had cycled over 100 km, and as every night we were very hungry. Anticipating the situation we have cooked 700 grams of spaghettis, everything we had, when in fact we usually cook 3 packages of 200 gr. I can not believe that these Latin American countries there are people who go hungry. There are huge tracts of good land, favorable climate allows several harvests a year, and also to produce an exclusively cattle pasture. These countries have enormous productive potential, but the people are extremely poor. The day worked at the field is paid USD 4.5.

At dinner time I served a fourth plate and gave it to the kids, but they were soon approached by the older, and almost taking away by force the plate, adjudging that the kids did not like the spaghettis.

In the last days of our stay in El Salvador we were welcomed by Edgar, who follows my travel by the Internet several years ago and about his country he told: “El Salvador is a country that is dollarized since 2001. The bet of the Government to reactivate the national economy was mainly maintain low inflation and interest rates and longer maturities on credit. To have confidence in the currency more international loans would be obtained and companies also would increase their productive investments and would pay higher wages. But time has shown that dollarization myths are false. Dollarization was a great financial transaction to favor a small mercantilist sector of the country. With it, public debt rose from 5,000 to 13,000 million dollars. According to data presented by the United Nations Program for Development poverty levels in the country have increased: nearly 50% of the population lives in poverty. Also the prices of basic goods have risen sharply, while employee wages are stagnant. As for interest rates: 3 years ago I purchased a computer at the Prado store, its price was 355 USD, but I could not buy it on cash, I agreed to finance it in 36 monthly payments of $ 30.51 each. Fortunately today I will pay the penultimate one”.