The idea of travelling round the continent with two or three European sponsors didn’t succeed. It seemed that there weren’t firms whom I could introduce this kind of project. Our marketing policy goes another strategy, they used to said to me. So I had to think on plan B.

If I had to summarize the end of Africa and the beginning of this continent, I should go back in time, maybe to the moment when I arrived in Nairobi, in October 2002. I thought I had to be prepared when I arrived in Europe if I wanted to go on travelling with local sponsors that supported my adventure.

Since then, I began to work almost profesionally. From Africa I travelled to Europe for a couple of months to introduce my project by myself to several firms from different cities, before they closed their yearly expenses; so making contacts and talking to the media I knew their burocracy.

But this time I wasn’t lucky. The idea of travelling round the continent with two or three European sponsors didn’t succeed.

It seemed that there weren’t firms whom I could introduce this kind of project. Maybe because it is small? Maybe it is as they answered me: their marketing policy goes another strategy. I’m sure about that, it’s about strategy.

Without giving up, I returned to Argentina. There, I confirmed that the relationship between Scarpati and Biking around the world will remain intact no matter what happens. I also made good use of those days in my country editing a video material and designed a new diagram for the web site.

The truth is that to start my travel round Europe, I had to resort to Plan B, the problem was that I hadn’t thought about Plan B very much, and the European spring was beginning.

When I started to bike from Cape Town, my sister and her husband moved to Madrid. They were also suffering the consequences of the financial crisis in Argentina.

As they live in Arroyomolinos, I stayed in one of the rooms of their house and took possession of it. Thanks to the kindness of my brother in law, Aldito, I stayed there for several weeks thinking in a Plan B and assimilating where I was.

Arroyomolinos is a small town in the outskirts of the capital, but what impressed me was the shopping center close to it. It was huge and atypical, I couldn’t believe my eyes, there was a ski slope with artificial snow built inside the building. The first world welcomed me. 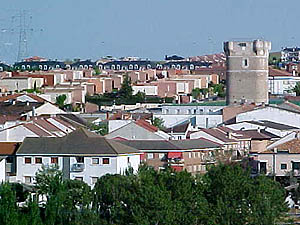 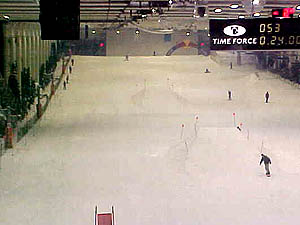 During my stay in Madrid, I received a donation from “La Caixa” Bank, branch San Sebastián de los Reyes and from Southern Winds Spain who gave me the possibility to travel to Argentina before starting my new stage. And it was good, at least I met my friends and family.

When I came back, two TV channels interviewed me, and I was really surprised by one of them. In Telemadrid, a Tuesday night live programme, they surprised me with the visit of two nieces of my grandfather, who lived in Segovia. What a shock! My sister had been an accomplice.

….I dedicated the following days to the Plan B, my old profession, which I think will always be with me: “doing what I can to make money”.

So I got a jean jacket and, as in my old times in Brazil, I pinned hundreds of little dolls on it, those dolls that helped me so much in 1999. And with the photos of my travel around Africa, I went to Plaza Mayor on Saturday and to the Rastro on Sunday thinking that the sale on the streets could support my next stage.

And it was good, many people had seen me on TV and I sold many dolls. Chance? Luck? I don’t know, but at least I could get the money to travel for a couple of weeks, and I was sure that this Plan B would work..