The French RIviera is the most exclusive coast in Europe. Famous by the rich and famous people who frequent it, it remains active during the whole year, for their good climate, for their beaches and for their night life. Before the evening I looked for a place in the outskirts of the cities to camp.

With cold weather, some rains and too much wind I disembarked in Sete. I left from Morocco and the trip was extended per two days. A lot of people in the ship felt sick. And it was very comic, because the chairs of the restaurant with the people sat down were moved by the swinging of the ship. But I also got scared because for moments I thought that I would live a history like the Titanic.

For third time I entered to France, but this time, in route to Italy, to know the Blue Coast. After I left Sete, I arrived to Montpellier, and a strong rain forced me to pay a hotel and to wait for the good weather. 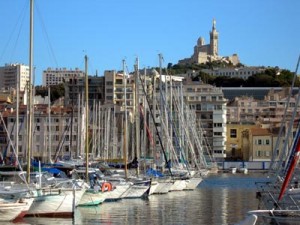 After a couple of days I arrived in Marseille, where another strong rain received me. It was the end of the summer and for some hours the city was flooded. But Marseille is beautiful. It has the biggest domestic port and it is the older city of importance in France. A cosmopolitan place where people of all sides inhabit, and by this reason a little dangerous too.

During my days there I lived a couple of episodes, and they weren’t very nice. When I went to an Arab restaurant to eat a kebab, a boy of Morocco, who saw the Moroccan flag in my bicycle, was commoved and he insisted on paying my sandwich, but I noticed that he paid it less because he was the owner’s friend. But the big discussion started when he took a soda for me, in spite of I only requested a glass of water. But it was obvious, the Moroccan guy also paid less the drink and the owner of the place who was working, didn’t like it.

I tried to appease the discussion, I wanted to pay my bill, or at least the difference, but my new friend refused it and he threw the open soda to the head of the owner of the local, calling him of racist. And it was the beginning of a big tangle. Several Moroccans that were in the place started to discuss and I had to leave the place as quick as I could and, of course without eating my kebab.

Later I stopped in other restaurant and I ate the same sandwich, but then I had a terrible liver attack. I had been a strong headache for four days.

The second episode in Marseille was because one of those lunatics that frequent the street was also enraged with me, when I told him that I didn’t speak French. He began to scream me in a fury way and for a moment I thought that he will hit me, the black man was taller than me, and at least with about 20 kilos more. But finally he calmed down when after he told me a heap of things in a brave tone, he asked me if I had understood him. This time I stared at him but with a lot of fear in my interior and I answered him: “yes I understood you” and I was right because the black man calmed down and he left. But I couldn’t believe how a simple comment can bring me a bad moment!!! 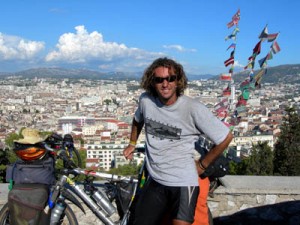 Finally I left Marseille after a good day of sales, and after knowing Christophe, a French guy who had travelled around Africa by motorcycle. He introduced me to Thierry, the owner of “Marseseillais” a brand of T-shirts, who present me some T-shirts to change my old clothes.

In the Blue Coast

The hard cycled through the blue coast, extended along one week, between long and reiterated ascents and quick slopes down. It was by this way that I visited Cassis, The Ciotat, Toulon, Saint Tropez and Cannes. They are paradisiacal places but also very expensive. For this reason before the evening I looked for a place in the outskirts of the cities to camp. Some of them were in steep area in front of the sea, with the best views, as if I would be one of the richest tourists who pays for one of the best rooms; and other times in the middle of the forest or in front of a lake, with a dense vegetation and with hundreds of mosquitoes. As I suffered!!!

But camping in any side doesn’t offer me a lot of tranquillity. Because in the presence of the minimum noise which can be a bird or inclusive the wind, I hallucinate that it can be an animal, (it would not be the first time) or the owner of the area or in the worst of the cases somebody who wants to steal me. I still remember that night in Kenya… and I cannot always sleep calm.

The Blue Cost is the most exclusive coast in Europe. Famous by the rich and famous people who frequent it, it remains active during the whole year, for their good climate, for their beaches and for their night life. 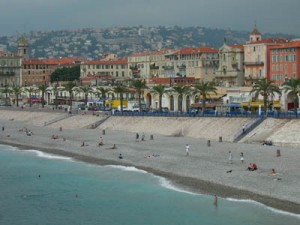 After leaving Cannes, where I made some good sales, I arrived to Antibes, and then to Nice, one of the biggest coastal complexes in the Mediterranean coast which possesses the second more trafficked airport of France. But I didn’t like it, because in spite of its sea is of a great turquoise colour, its beaches are not of sand, but of small stones and of grey colour.

Monaco, at least has an artificial beach, a small principality of 1,9 square km with sky-scraper and a great casino; it is ruled from its existence for the monarchy of the Grimaldi, when they bought to the Genoese the lands in the year 1297.

Finally I arrived to Menton where I spent my last night, because my next destination would be Italy.