Munich is the most important city in the south of Germany; it has majestic buildings, besides historical monuments, and important museums. It is also well-known by the celebrated party of the beer Oktoberfest. I stayed in the city during a week and I collected the money to cycle another itinerary of the trip.

I crossed the frontier between Germany and Austria without realizing, there was not a notice neither a flag that indicated it to me, I was again in the European Union.

But in a few kilometres I was reached by a patrol car and it stopped, afterwards “Stop” ordered  the official with his hand, “passport“, he told me. I got off the bike, looked for it and I gave it to him. The police officer went to the radio of the patrol car and checked up the information. He delayed one minute to come back. I had no problem at all.

It started to rain heavily; luckily I could shelter in the attic of a house of the town I was crossing. There I put the German flag in my bike, they are already twenty-one.  Three hours later, it stopped raining; I no longer knew how to wait. The sun came out and I returned to the route, one hundred kilometres were missing up to Munich.

The road was in ascends and constant drops, the route was divided. I crossed several towns until I realized that I have lost once again. I asked to people but we could not understand each other, that was really a difficult task. Finally, I found a driver who explained me with a lot of patience and I could follow my trip. 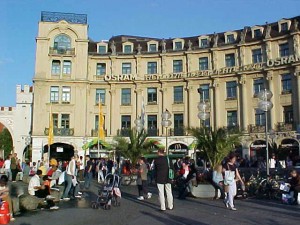 I arrived in Munich at 6 pm, with another heavy rain. While I was entering into the city, a boy, who spoke a little Spanish, came towards me and he offered to lodge in his house, and I didn´t doubt it, although this one was, in fact, a free room  in a family’s house.  Hanse helped me to repair some parts of the bike, we bought some food and we cooked it. He was easy-going, he had been in Argentina and his dream was to come back someday.

But the following day, everything changed, it seemed that his kindness was over or maybe because of one of the owners of the house, and suddenly we had to leave it, under a heavy rain. Hanse apologized and he went to his girlfriend’s house. He told me she was ill, “OK, no problem” I told him. The only thing I wished was the rain to stop, because I had to wait for 3 hours under a roof near his house, in the outskirts of the city.

Then, I called Matt, another German who I knew in Barcelona, and who let me stayed in his study. It was too small, but it didn’t matter, it was a good option to save the money of the hostel, the cost is about 20 euros per day. I stayed there for another two days.

Munich is the most important city in the south of Germany; it has majestic buildings, besides historical monuments, and important museums. It is also well-known by the celebrated party of the beer “Oktoberfest”. 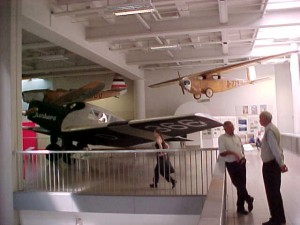 I stayed in the city during a week, I worked near to the city hall and I collected the money to cycle another itinerary of the trip. I also visited the “Deutsches Museum” that it shows how the natural sciences and the technology evolved , from their origins until the modernity; in diverse areas, like agriculture, sailing, aeronautics and bicycles, among other things, a place to spend the whole day if you want.

The search per a German sponsor

I arrived to Munich thinking that I would see the manager of sponsor’s department of a mark of cereals bars, which are present in the north of Europe. I introduced him the project when I was in Germany the first time looking for support, at the end of 2002. I also sent him material from Kenya, and finally he talked to him several times by phone. The last time it was from Austria and he told me that he will help me. But at the time that I called him from the city he started to put excuses and I couldn’t to meet him, in spite of his promises.

It doesn’t care, the trip it is still long, I thought. And to console myself I remembered the words that a manager told me in Argentina: “There is none indispensable for your project more than you and your health” And it is true. 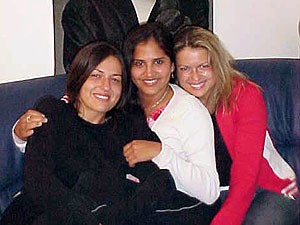 In my last days in Munich the rains continued and also my moving. By this way I went to the house of two Slovak girls and their Peruvian friend who I met during week. There I ate inyera, the traditional food of Ethiopia, because the girls had an Ethiopian friend who cooked it.

But the biggest surprise was to meet Peter, a guy who I knew in Maputo, Mozambique. At that time Peter travelled through Africa and he also was looking for his sponsors to a photographic exhibition.

So we went to a traditional place of his neighbourhood to drink a couple of beers, although Peter didn’t like about the idea and then I understood him.  It was in a giant bar, like a big club but without any music. It was outdoors and there were like two hundred tables with 12 or 14 people for each one. And all of them were in their 50 years old around. 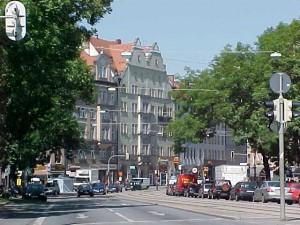 Finally I left the city but I came back because the central axle of my bike broke. I had cycled more than 22.000 km. But the problem was that the piece was Shimano from Italy and in Germany, Shimano spare parts come from Japan, and they are different. If I wanted it I should wait several days.

I went through the whole city to 8 or 9 cycle shop but none had this piece of my bike. Then I returned to who had dismantled it and we commend the piece to another similar mark. And I was lucky; an order was arriving the next day. The owner of the cycle shop seems very kindly.

… but at the payment time he took advantage and I paid much more that I thought.  He was a fucking guy.