In Santiuste, Segovia there are the grandfather’s nephews Víctor and I cycled to there. At one of the corners of the entrance of the town there was an older man wearing beret and long shelter. I was too cold, but he was waiting for me

My road toward the south continued to Segovia, because it was from Santiuste, a small village, from where my grandfather emigrated to Argentina, in the time of the Spanish civil war.

But my grandfather Víctor was a little pirate, because with 17 years and with his older brother’s passport he went aboard and he escaped to the military service of the dictatorship.  Perhaps I had made the same thing.

But he didn’t leave alone, because his other brother Fermín accompanied him. Several years later, when the situation in Spain seemed to be calmer, Fermín returned; but the militia charged his life and my grandfather never more returned. 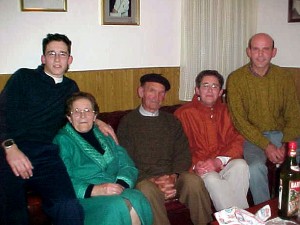 But in Santiuste there are the grandfather’s nephews Víctor and you should have seen as they received me. I remember that the day that I cycled to Santiuste, for a mistake in my calculations I arrived at night and it was very cold. At one of the corners of the entrance of the town there was an older man wearing beret and long shelter. I came closer him for instinct and when I told him “hello”, the man who had ears so big as my grandfather, smiled me; then almost without talk any word more we throw a hug and we moved.

“Was it necessary that you wait for me here with this cold”, I asked to Valentine who was 87 years old and only listened of a hearing. So he smiled, and at that moment I remembered to my grandfather.

Valentine was the most astute, although several in the family waited for me, he went to my encounter and he carried me to his house to have dinner. I passed a couple of hours with him and his family and he showed me photos of my grandfather which kept them like one of the most valuable memories from his old box; he also told me that it was his father Demetrio who lent the passport to my grandfather so that can travel to Argentina. 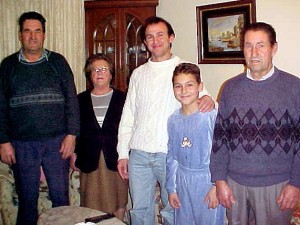 Then I met their cousins, Elías and Victor that were also my grandfather’s nephews, and to each one of their families in each one of their houses, where I ate repeated times. I couldn’t eat more, but all of them wanted to assist me in the best way. This is your house Victor told me one and another time.

In the following morning Victor showed me the house where my grandfather lived, recently it had been sold and it would be demolished. The house was very humble and of an only floor. I could to observe it from the window. And I was moved, because while I looked at it I thought as my grandfather had been happy to know that I was here in his homeland and in his house.

Minutes later with a knot in my throat and with some tears I hugged to Victor and I said to him goodbye. I only reached to tell him that I was very excited, I could not speak and as if he was calling to the silence with his red eyes too, he answered me: “have good trip boy”

During 10 kilometres I didn’t stop of shedding tears. I felt as a boy and I never knew for that I was moved so much; maybe because in the bottom I sensed that perhaps nevermore I would see them again.

Without a doubt I lived in Santiuste one of the most moving moments in my trip, because I had arrived to my grandfather’s lands.