Guatemala, how to survive traveling

Latin America is one of the favorite destinations in the world for whom that choose to take a fallow year and make the trip of their life. In this article I tell some of the advantages and realities; but after all how to do the things flow. 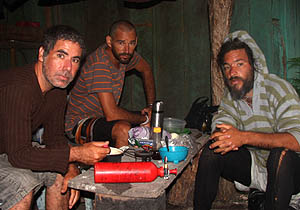 After crossing Belize, Fran, Juan and I entered Guatemala. Due to some problems with their bikes, the progress was very slow. As they hardly had money to eat, we focused our trail on how to make it, so they can buy the minimum spare parts. This wasn’t an easy task. According to the national survey on life Conditions on 2011 more than 50% of the population in Guatemala lives in poverty.

Latin America is one of the favorite destinations in the world for whom that choose to take a fallow year and make the trip of their life. There are travel backpackers, rideshare travelers, by bicycle, motorcycle, by car, in a van and also in a Limousine. Argentina – Alaska route or Argentina- Mexico for those who didn´t get the US visa has become the most popular among Latin American travelers. The advantage, beside the language and the cheap that takes to live and move overland in these countries, is that you can travel and cover the costs selling handcrafts.

But fellows let me tell you that this is getting more difficult day by day, there are hundreds of travelers that moved around on this conditions, and the good spots to sell aren´t many. Now more often the authorities obstacle us asking for licenses, permissions and protect those who pay taxes, and because of this it feels that in these latitudes the craft traveler is not welcome any more.

Fran has macramé bracelets, but as he says as pretty as my designs are, I think there are not any difference from all others. Juan instead has something different, silver designs: rings, earrings and bracelets with gemstones. But his designs not always fit to the customers on the places we transit.

On our arrival to Flores we contacted Matias, a good friend ’s friend’s  friend, son of Holland parents, has lived on many countries, but he is a born traveler, one of those who traveled half the world but over all has the vision and courage to make business any place. The guy has 10 years in this place and practically has a monopoly for the alternative tourism who visit Flores, definitely the best place “Los Amigos Hostel”. Barely knowing us he gave us a very good price to stay, but after 2 days and now knowing our story and watching the documentary of my trip he let us stay for free the days we needed.

The first days we got out to sell. Flores is one of those places where the police and the municipality authorities don’t bother. We share the street with other handcrafters and the few tourists walking on the pier. Fran and Juan sell just a bit, as the others there. But I did more, due to my documentary and the banner I carry that attracts people. At the fifth day Fran understood that it was better to sell his story than his bracelets, so he made his own banner. “Travelling the world for 6 years on a bicycle is a worthy project that people support” I told him more than once. Since then Fran started doing more money a little by the handcrafts and a little more with the interest shown by the people attracted on his story.

Finally on Guatemala City after another weekend selling at the street, Fran could buy the whole transmission equipment and a tire for his bike.

Juan case was more complex, but fortunately for him, I received the visit of that woman that in Mexico has taken a big part of my heart, lets call her Fiancé, Girlfriend, My Girl, I don’t know, with the kind of life I have, there is not the right and fare adjective. Anyway, after having spent a fantastic few days with Norma, she took to Mexico some of Juan pieces and two weeks later this ex government employee, Juan, that drags his bike as slow as turtle in every single lethal uploads that Guatemala has, knows about the sale of several of his pieces and finally could relax and project a little bit more his trip.

On our way to Guatemala City we have pedaled long climbs with up to 17 to 18 % inclined, the road between Chisec and Coban is a real disrespect to the cyclist. There not just Juan dragged his bike I was beside him very close and as slow as turtle too.

Although hotels in this country are very cheap, we prefer head to farms; ask permission and camp on sunset. During all the route that we did together for Central America our menu were limited, rice and beans for lunch and a big pasta plate for dinner 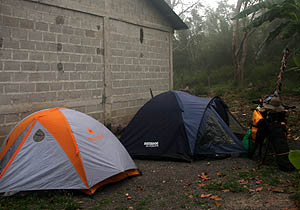 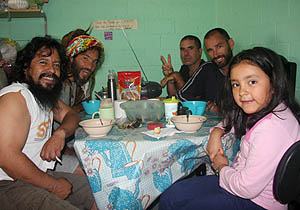 In the capital of the country Julio Chacon who follows my trip by the internet since more than 10 years received us. Despite his small and humble house the guy received the 3 of us as if we were lifelong friends. Historian by profession Julio now works on literacy programs, although he dreams on crossing America on a bicycle. After 5 days coexisting with Julio, it did get cleared to him, that if people like us, with very little resources are doing it why other people could not?

The big secret is to have faith and let Providence provide us. Because as long as we transit with humility and respect, things and also people flows a magic way.

Thanks to Onvisa hostel in Antigua Guatemala who provide us a week stay free of charge.