When I came into Haiti, it was market day in Dajabon, the border city in Dominican Republic. There were thousands of Haitians crammed darted to his neighboring country hoping to achieve some sales. It was the first time in 13 years of travel around the world that I visit a country wearing escort by choice. Haiti was the first country in Latin America to achieve Independence and paradoxically, according to the UN, it is the poorest country in the Western Hemisphere. Marc, a Haitian who studied Business Administration gave me his opinion.

When I came into Haiti, I felt like I was in Africa. The population is of African descent, without exception. The streets are a mess, and in poor condition and the heat is scorching. We entered by Juana Mendez, the north border town . It was 10:30 am, and we had already seen the entrance of at least 5,000 Haitians to Dominican Republic, who had crossed the border to sell their products. It was Monday and it was market day in Dajabon, the best African style. People entered with trucks or with huge bags on their heads, overflowing with goods. It was like watching a herd of Gnus migrate during the rainy season in search of greener pastures. There were thousands of Haitians crammed darted to his neighboring country hoping to achieve at least a sale. Surely many also try to filter out the military cordon and stay in Dominican Republic.

Haitian illegal immigration has become a serious problem in the Dominican Republic. Organizations studying the subject estimate that currently more than a million Haitians live among immigrants and persons born in Dominican territory, representing over 10% of the population. It is an extremely poor inmigration and many Dominicans related this to the increase in crime, overcrowding and unemployment. 8 out of 10 Dominicans talked us bad about Haiti and its people. The nonsense was that nobody had visited this country.

Haiti has the lowest per capita income in the Western Hemisphere, according to the Human Development Index of the UN is the poorest country in the Americas. I had serious doubts about visiting Haiti because there is no independent tourism and pedaling along their routes  would make me more vulnerable to a robbery. I wondered how far it was worth risking my belongings and my work equipment for the mere fact of visiting another country. I think that Haiti is not the best place to go cycling alone, but I was with my friend Fernando, who had traveled from Argentina to accompany me at this stage.

But, Haiti was not just another country, but the first country in Latin America to achieve independence, and the first case in history in which a people’s rebellion reaches emancipation and the abolition of slavery. I wonder how Haiti today has become one of the world’s poorest countries. 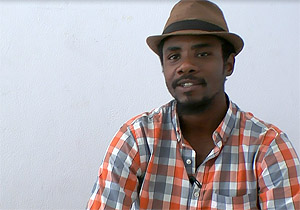 My friend Marc, a Haitian who at the time I met him was preparing his thesis in Business Administration in Dominican Republic gave me his opinion: “During colonial times as in other Caribbean islands, the island of Santo Domingo was exploited in their full potential. It ran one of the periods of humanity where exploitation was more on a human level and at natural resources. The workforce was all from Africa, from different places, of different languages and cultures. This diversity of people was found in the same piece of land and eventually born a new language: the Creole and with it a new identity, new and profound ideas. Its first leaders Toussaint Louverture and Jean-Jacques Dessalines lead Haiti in 1804 to become the first country free from slavery and independent. But as white people dominated the world and could not allow the existence of a nation governed by former slaves because it represented a threat to their own slave systems. Therefore Haiti for 20 years, suffered a trade blockade promoted by France, the US and the European powers. It was a complete abandonment of the international community to get things harder. The recognition of the Haitian independence and the lifting of the blockade was conditioned to pay a huge indemnity to France, for which we are indebted to themselves. That was the first credit contracted subjected the country to increased foreign debt. We have also suffered from internal conflicts our independence, our leader´s murder and corruption. The history has put us on a path of exploitation of natural resources, and we have followed this path so far, getting more and more firewood and timber, causing soil erosion and a shortage of drinking water. 7 out of 10 Haitians depend on subsistence agriculture and that is what keeps them alive”.

Arriving at the border, Fernando and I decided to accept the offer of Carlos and Juan, two Dominican engineers who received us in Santo Domingo and who had worked in Haiti. In Dajabon, a Dominican border town, their relaible person Alexis was waiting us who worked on Haitian soil on a banana plantation project. By knowing our history Alexis became a fan of my project and commissioned us to two motobikers to work as translators, guide, and in the worst cases, bodyguards. Street protests that month had already left hundreds of  injured and seven killed, one of them, a UN`s Chile blue helmet.

Our traveling companions were Leframe and Bruno and after filling up their gasoline tanks  and agree on the price for their work, left behind us. We left Juana Mendez town and I began to feel like a goose, it was the first time in 13 years of travel wearing escort by choice. But as we were getting into the country I began to notice the look of some people dislike us. We were strangers, people are not used to the tourists, and they looked at us as if we were intruders, and wondering: what are you doing here?

La Citadelle Laferriere was our destiny, the greatest fort of the continent witnessed the only successful slave revolution in history .

That afternoon we reached Milot, the last village on our  way to the Citadelle. There was only one hotel, European price and we found it very expensive. Therefore Fernando and I headed to Chile Battalion, joint force Army – Navy, in Cap Haitien, where we ask for permission to camp. But there we were welcomed like true compatriots, they offered us an air-conditioning, room, a bed, blankets and invited us to dinner and breakfast.

In the next morning we left our bikes and rode on the motorcycles with Leframe and Bruno, headed  to the Citadelle.
World Heritage, the Citadelle Laferriere was built just after independence, under the orders of King Henri Christophe in the early nineteenth century to defend the provinces against a return of the French. Reach the fort is an ambitious initiative to anyone. The trip from the city of Milot at the foot of the fort is the first obstacle to overcome impossible to get there by bike. The cobbled, narrow, too tight corners and steep path covers 700 mt of altitude on a stretch of 5 km. Hundreds of workers and few machines work with the hope that the tourism comes, but also prevent the passage of any vehicle except motorcycles and horses offered by local guides in the village. Leframe and Bruno lead their bikes splendidly. Fernando and I suffer more than them because of the motorcycles on the road and therefore at the time of payment, they were well rewarded.

At the foot of the fort we find local guides who offer their service and again horses to climb a steep path, which ends at the top of the mountain, 900 meters above sea level. In our case we just hired Philippe and thus climbed for 45 minutes under an infernal sun. Although it was not necessary our loyal bodyguards did not separate from us and also climbed that terrible trail. Our relationship was not like the first day, just working. Fernando and I started to estimate them, and I believe them too.

We arrived exhausted but all such efforts was rewarded, the place is amazing with a spectacular view of the surrounding valley, several towns and the sea. And during the tour of the fort Philippe that speaks 4 languages, including Spanish told us: “The fortress was built by 20,000 men for 15 years and was raised to house 5,000 soldiers for a full year. There are 365 cannons and thousand and cannonballs. The foundations of the building were built on the rock and fastened with a mixture of lime, molasses and blood of cows and goats. These animals were sacrificed shedding their blood on the walls under construction for the voodoo gods give power and protection. Perhaps it is this protection that has allowed it to withstand several earthquakes since its construction”. 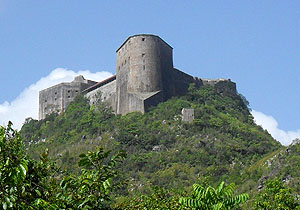 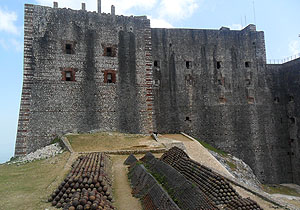 “Haiti was the only country that was born as a result of a slave revolt. For Haitians the Citadelle Laferriere is a symbol of the fight for freedom, of triumph and what we could achieve if we join us instead of fighting each other”.

Fernando and I left the country very happy. Visit Haiti had been a good choice, and hire Leframe and Bruno too. If we had not come here, surely we would also be blinded at the time of talking about this country.