It is believed that Holland is the country bikes and that it is perfect to cycle through bicycle lines. But it is wrong, because when you leave a city the cycle-lanes start to divide as a great labyrinth and it is quite impossible don´t get lost.

Coming from England, I disembarked in Hoek van Holland at 22. And I suffered a lot because that ship moved as any other one. It was raining and very cold but I went to Rotterdam where there was a youth hostel.

In the morning I had to get up early to get my breakfast, (one of the disadvantages of the hostels) and then I cycled to Amsterdam.

I visited the tourist information office, but I didn’t buy the map, which shows me all the cycleway to Amsterdam, because it cost 6 Euros and I would use just one day. So I wrote the towns to cross. Once more, I made a mistake. 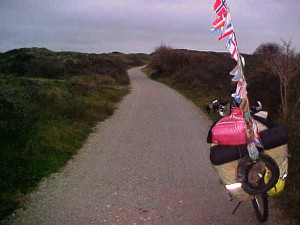 When I left Rotterdam the cycle-roads started to divide as a great labyrinth, and the posters of information only showed the nearest towns and not the capital where I go. Dozens of times I stopped to ask, but nobody knew how to inform me which was the best cycle-road toward Amsterdam. I could not believe it, two hours had passed and I had only gone away 15 km from the city.

So I got angry and I went to the route, where cars go, and I began to cycle on the verge. But in some minutes a car’s driver, with soul of righteous, forced me to abandon the route. But I didn’t give him importance and I continued cycling; but I made him a sign like “Ok, I will do it”. But the man who turned out to be more hard than me, began to scream me; saying to me that I was putting my life in danger and the life of the other drivers and he didn’t move of behind mine. Then I didn’t have more option than to cross a line of dense bushes and I entered to the cycle-road, cursing to the great one righteous.

Some minutes later, while I requested information to three people, a police car arrived suddenly and in a not very friendly way. And automatically who could be the witness of my desperation, disappeared. I had to face up to the anger of the officials who only wanted to make me a fine. It was obvious that that driver had denounced me by telephone.

But at the end I was lucky, I explained to them what happened and they liberated me of the fine, but they noticed me: “if we find you other time in the route you will pay a fine.”

For this reason, my road to Amsterdam was an odyssey. Up to half way I took a long time and I lost countless times, but then I met a cyclist who a lot of patience, (he didn’t speak English) accompanied me across 20 km and he guided me toward Amsterdam. My average was disastrous; I arrived at night, after 105 km and almost 10 hours of trip, and between Rotterdam and Amsterdam there are only 75 km. But I should be happy because I was in the country of the bicycles. 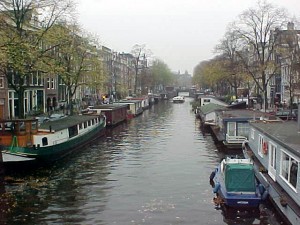 Amsterdam was founded toward to 1200, as a small fishing town in the outlet of the river Amstel. And their population didn’t delay to be the first commercial power of the north of Europe and, in the XVII century, they were the centre of an extensive empire.

Formerly good part of the territory of Holland lay under the water, but its people knew as snatch away to the sea big areas of lands. Today the coast stays by means of a system of drainage of mills, dikes and channels.

According to people only from the air you can appreciate how extensive is still the area covered by water and how reduced the lands are. Holland is the most densely country of Europe.

My days in Amsterdam were of the most pleasant; there I met Juan Carlos and Kurt that received me like a great friend. Too I visited some markets where I sold my photos and my dolls. And I travelled through the city which seduced me with their channels and with their idiosyncrasy.

Baukje explained to me as Holland has been from the past, liberal and tolerant with the minorities. The country has welcomed the Jews during centuries, and although the Catholicism was prohibited after the independence, the authorities were permissive with its practice. According to Baukje that tolerance is practiced today with the exiles, gays, lesbians and people of different environments. The respect for the right of each one to live its life underlies in the liberality of the laws that regulate the prostitution and the drugs.

And it was exotic to walk for the red neighbourhood and to observe as the prostitutes are exhibited in the windows.

But at night, walking for the streets, I had the sensation that some places were dangerous, it could notice in the face of people who strolled without direction or under the effect of some drug. In more than an occasion they came to me to provoke me. But always I controlled the situation. The only problem that I got was when one afternoon I was selling in the “Square Dam” and I ended to the struggles with a group of Moroccans that defended their African friend, who made my bike fall down. The blow was so strong that it caused the rupture of the three foot that sustained the bike. Automatically I called him of stupid and we left one above the other one. 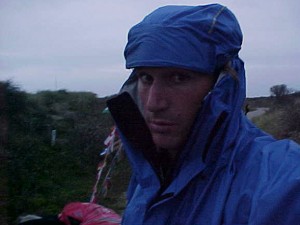 Heading to the south

My road heading for Belgium continued first toward Den Haag and then toward Roosendaal. I cycled during three days to arrive to the frontier. I always cycled under rain and with a strong wind in my front. I still remember a night when I should cross that bridge; I couldn’t see anything, I was soaked and with too much cold.

And now in Holland, once more; as many other times in my trip, I wondered: “What am I doing here?”