By an Iraqi refugee

I met Raifed during my stay in Bahrain, and to talk with him was so interested, because he is one of the 5 millions Iraqis refugees, who told me about the situation in his country. 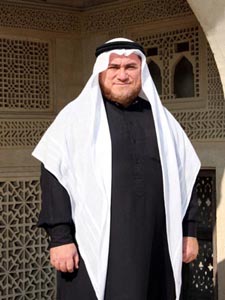 I met Raifed during my stay in Bahrain, in a private tour which he offered me to visit the Muharraq Island, at the north of the Kingdom. But at the end of the tour I discovered that he is one of the 5 millions Iraqis refugees. For it, I meet him another day, because I was interested to know about the situation in his country.

When he was 18 years old, after a selection process Raifed travelled to England to study airline pilot. So two years later he became the youngest pilot in his country, and he began to work for the Iraqi Airlines. But after the economic embargo imposed to Iraq at the end of the Persian Gulf War in 1991, he stopped to fly and he started to work as merchant. With the arrival of the North Americans in 2003, he lost part of his family and for it in 2005 he preferred to move to Bahrain with his 6 children and his wife. “It was too dangerous” he told me.

“Saddam had bad things and good things, but the North Americans always showed the bad ones. Any weak one governs a country. In Saddam’s era, there were 0% of not educated people, everybody knew read and write, and in the health sector didn’t lack anything. But since 1991 the embargo which was imposed by the UN with the purpose to finish the Saddam’s government, only caused the decadence of the Iraqi society which was one of the most prosperous in Middle East. The famine and the poverty punished the children, women and elderly people; and as consequence the death toll exceed the million, being half of them children younger than five years. According to data, during the Iraqi embargo one of each four children was undernourished and the polio which had been eradicated in Middle East was again a scourge; while the diarrhea was the main cause of infantile mortality. The embargo also prevented Iraq to reconstruct infrastructures and this way to impel our economy”, he told me in an altered tone. “Most of the population could only subsist with the help food gave by the State, because their reserves had been ended. Was not it a genocide?”, he asked me.

I kept silence, and almost without breathing I kept listening and recording his declarations of impotence: “In 2003 the destruction of Iraq began again, by Americans with all their glories. It seems that they don’t register the history very well, they think that they are more talented, cleverer than us that they are perfect and we are nothing like Red Indian; and they are the Yankees. This type of mentality is a badly which affects everywhere, they think that they can terrify people forever, because they have bombs, airplanes? Some day they will pay it, none can stay victim forever. They are using the logic of power, not the power of logic. Iraq is a country with more than 7,000 years of history, cradle of the civilization, Abraham was from here”, he said in a tone which showed resentment.

And he kept saying: “Today the death toll exceed the million and half and we are between 4 and 5 millions of people homeless, refugees in the world, why? Because of the obsession with democracy. What people think? That now Iraq is safer? No, it is not! Those people who are now in the power show themselves patriotic, they try to buy people giving them money or one or another thing, but everybody know their history and their roots. You cannot be my father at least my DNA matches your DNA. Most of them don’t have roots in our country, they are from Persia, from Iran, from other places, they are not pure Iraqis, they don’t think about people; only about themselves and their benefits. They have brought false certificates to become part of the government, before we didn’t have even one false certificate of any employee in the government or any place, now there are thousands of them, carrying Master, Ph.D. and Degrees”.

“Before, we had army who care for the security of the country, it didn’t matter if they were from the north or south, from the center or from the east, everyone defended Iraq. Now, each one of them cares about his party, because each party has its own militia. The authorities put a militia in the police, another in the army and this way they legalize them, but all of them are militias, with their own agenda, trying to get benefits from the government: weapons, one thing or another thing, and they support their parties, they are not supporting people. This is why now we cannot defend any part of the country, Turks set in the north, the Iranians in the east”, – you talk about the Kurds” I ask him, “- yes” he tells me, “- they are getting inside, going outside, none knows what they do, the frontiers are open to anyone; all the intelligence agencies work free in Iraq, all the mafias, the prostitution and drugs dealers work free in Iraq. It happened like in Albania, it is the something, or Azerbaijan; with all societies which have socialist regime and try the democracy, with its very open regime, open for who pay. Tomorrow you will see people who are the own of half of Bagdad, and they are not Iraqis; like in Dubai, Dubai is not owned by Sheikh Mohammed bin Rashid Al Maktoum, is owned by the companies, all those towers, those buildings, all those investments. So it is no longer a territory, it is no longer a land for you; it is a land for who is paying more. Before not, it was land for me, for my children and my grandchildren”.

“This is the issue: the logic of the power, not the power of the logic, as more weapons you have more you shoot, and if you lose I do whatever I like with you, because you are the victim and I am the winner. This is now the mentality,  ..…the mentality of a jungle”.