We arrived in Beirut on the middle of December of 2006, and in spite of there were more than four months since the war with Israel had already ended, the Lebanese capital was not still in peace because now the threat was the beginning of a new civil war.

Way to the Lebanon border we were approached by some Syrian military youths and their dogs, maybe for this they were convinced of their superiority; and it was not easy to get rid of them. It was later, the weather was cold and they probably were boring.

Then, after some km of sloping down, we arrived to the frontier, we paid a visa and at once we trod Lebanese land. By this way we arrived to Masnaa Bekaa, a small population where we met Mohamed, a Brazilian guy with Lebanese origin who was living there since 20 years ago. According to him there are more Lebanese people living outside country than inside.

After conversing a while he offered us a place to sleep, it was a pompous building where his siblings inhabited. And it was amusing, because at the beginning he said to us that we could sleep under the stairway, but when we told him that we preferred to pay a hotel at once he offered us a room in the last floor.

In the morning after leaving Masnaa we crossed the great mountainous range which divide the country, and how hard those 15 km of uninterrupted ascent were, it was a very narrow route. While I was resting, sat down on the bike, a truck touched me lightly and it made myself to lose the balance of the bike and I fell down in an enormous canal that skirted the route for several km, and how difficult was to remove my bike from there, because it was with the wheels to up.

But then we had almost 30 km of sloping down, and it was wonderful, then we arrived to Beirut. 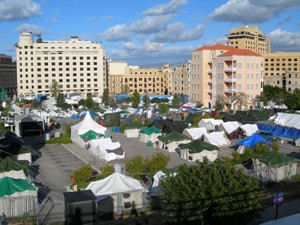 We arrived in Beirut on the middle of December of 2006, and in spite of there were more than four months since the war with Israel had already ended, the Lebanese capital was not still in peace because now the threat was the beginning of a new civil war.

Way to the centre we began to see strongly armed soldiers groups, military cars and tanks; and only in that moment we become aware of the situation; then we came closer to the central square and just in front of the parliament we saw more than a hundred of tents that gathered to thousands Hezbollah’s followers, the Shiite and pro-Syrian movement, who together to parties allies claimed the first minister’s renouncement, Fouad Siniora, pro-western and “against” Syrian.

The crisis in Beirut began few weeks ago, when the group Hezbollah supported by Syria and Iran, began to claim for them and its allies to be in power. Paradoxically after to those demands, the first minister of Industry of the Christian party was murdered, and then six ministers pro-Syrian renounced. By this way the first minister’s genuineness is not recognized for the head of state neither for the parliament’s president, also both tied to Syria. 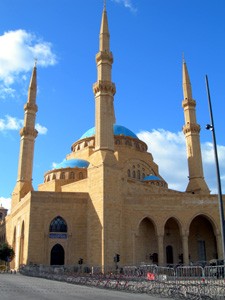 According the people who explained to us, not much later to the Mahoma prophet’s died, the Islam suffered an important separation that divided the faith in two main sects: Sunnites and Shiites. The division arose for the dispute about who should succeed to Mohammed who had not designated anybody. The Sunnites are the supporters of the line of successions of the caliphate, the first caliph was Abu Bakr, father of Mohammed’s second wife, the first male who the prophet converted to the Islam. On the other hand the Shiites headed by Ali arose for the dissatisfaction of unpopular measures taken by the third caliph Otman, who then was murdered. By this way Ali cousin of Mohammed and husband of Fatima, Mohammed’s daughter, was also chosen the fourth caliph.

The Shiites in Lebanon has always been the poorer class and in spite of their number, they used to be excluded of the struggle of the power, played by the Muslim Sunnites and the Christian maronitas, and they were ignored by the Government. When being concentrated in the south suffered the worst part in the Israelis attacks and the repression at the hands of the Hebrew occupants and their Lebanese allies, the Palestinian. This caused a massive displacement of population Shiite to the periphery of Beirut.

Hezbollah is the radical group Shiite that arose in Lebanon at beginning of the decade of 80, requesting the defeat of the occident imperialism and of the Lebanese phalange. Those were the years in that the embassy of USA in Beirut was destroyed by a bomb leaving 63 died and more than 100 wounded. But only months later the Americans left the country, after other simultaneous suicidal attacks to the military barracks of USA and France that caused more than 300 died.

In a bombarded area 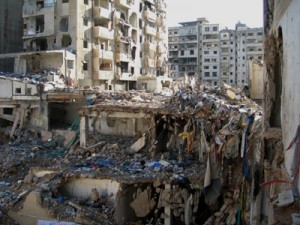 During our stay days in Beirut we visited the bombarded area by Israel in the south of the capital city, one of the areas of Hezbollah; this time the reason of the summer war, the name which the Lebanese called it, had been the kidnapping of two Israelis soldiers in the border area by the Shiite group.

But first to go to that area without any problems we requested permission in one of the Hezbollah office, then they assigned Ahmed to us, a boy who came with us during our visit to Chatila and its surroundings. Then in broken English he told us about: “The south of the country was the main area bombarded by Israel, and the Lebanese government has not still attended the families of those that died. Neither monetary compensation, neither psychological help, neither doctor, neither educational. Hezbollah works as the true and only government in the south of the Lebanon, on an absent official state.”

But talking with the older Shiite people, we also noticed how the two generations are divided by the war and the role of Hezbollah in their daily life. The old generation looks for the peace after so many years of civil war, while the youths born after the civil war, feel devotion for the militia Shiite and they are willing to die for its cause.

Meanwhile amid this whole political crisis people are who suffer, because the domestic economy is stopped, many local are closed or empties as the most of the hotels; the merchants don’t stop of complaining and the unemployment is immense.

In the outskirts of Beirut we also visited one of the Palestinian refugee’s camps, according to Salah, our friend and guide; these were created by the UN in 1948 in a temporary way, when the Palestinian escaped from the forces Israelis. At the beginning they were welcome but with time the Palestinian presence became a threat for the unstable National Board of Lebanon. By this way, without a place to move the Palestinian settled down but gradually they were restricted to have a right to work and of Palestinian movements. 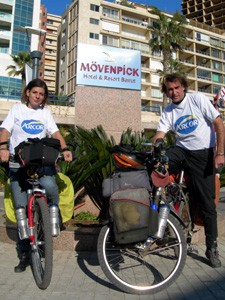 Today in Lebanon they add 500.000 and in spite of they are not able to do it, many Palestinian as Salah only think about returning to their mother land.

We finally stayed in Beirut during three weeks, and through the Argentina embassy we contacted some companies, and we got the support to continue ahead. This time ours sponsors were the representatives of the Argentinean brands of Arcor and Amanda yerba mate. Also Fatal, an important distributor and the Hotel Movenpick, a 5 stars hotel where we celebrated the New Year.

In spite of the social conflicts, Beirut will be remembered as any other Middle East city, because through Emile, our friend from Beirut we could know the other size of the city, with locals, charm and night life, with as much energy and dynamism as any European capital city.