My way through Lithuania was as short as the distance that the country has. But these days were enough to know the country and the kindness of its people.

The state that was empire

The first historical mention of Lithuania goes back in 1009. But in the XIV century it was when his duke, head of the Gediminas´s dynasty, enlarged the frontiers of the State during its long government. He created the Lithuanian empire and conquered cities like Novgorod, Smolensk and Minsk, among others; that today they are part of Russia and Byelorussia.

On the end of the same century with the matrimonial union of the duke Joailla and the princess heiress of the throne of Poland was given place to the union between the Kingdom of Poland and the Kingdom of Lithuania. This caused the conversion to the Christianity to the Lithuanian nobility and the population of Vilnius received the baptism.

During 200 years Lithuania was unified to Poland and then it was disputed by the Swedish although Pedro I the Big one was who affirmed in the region and who reached the Russian domain. Many years later in different occasions Lithuania was occupied by the Germans, for the Polish and for the Russian again.

Only in 1991 Lithuania reached its independence again. 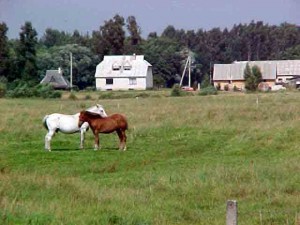 My way through Lithuania was as short as the distance that the country has. But these days were enough to know the country and the kindness of its people.

I entered to Lithuania from Poland, through Kalvarija. The border town was as isolated as its routes that come from there. Between the frontier and Kaunas there is less than 100 km, where there are flat fields and almost without populations. For this reason I arrived there in half-day.

In 1923 with the defeat of Germany after the First World War, Lithuania for the first time was proclaimed republic and Kaunas was its capital, although only up to 1940, when the country passed to be again under the Soviet tutelage.

Today Kaunas is the second city and it has a historical centre. I arrived there after 02.00 pm and when I entered to the city I asked to a taxi driver about the centre. I told it to him in several languages, I didn’t have idea how it was in Lithuanian. But I guessed right because he understood me and with a serious look he indicated me with his hand this is the centre.

I could not believe him, it was a street with to many trucks and buses, but there were not people, it seemed to Huergo Street in Buenos Aires, and I hoped to see something different, I wanted to sell my dolls. I passed a long while looking for information office and what difficult it was!!! But I finally arrived to the historical centre. 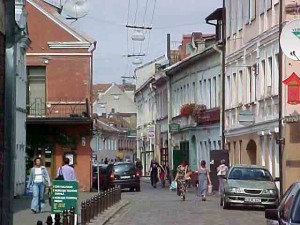 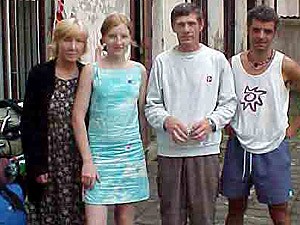 I worked a couple of hours and I sold very little, and suddenly Dagné, an about 50 year-old lady appeared to offer me her home to sleep. She didn’t speak English. I could not believe it; we didn’t understand each other and she was opening the doors of her house.

The house was an old construction and there were people working and it was a true muddle. But she offered me the best room. I was surprised.

On the end of the afternoon I met Iosu, a Basque guy who travelled also by bicycle; and after talking a little I invited him to the Dagné´s house where I will stay and he was also very well received.

When we say goodbye I didn’t know that attitude she will take, I thought that the woman will able to ask us something of money but that fool I was. She only hugged us, and she gave us a wooden Christ and she prayed a little, doing the sign of the cross in our foreheads.  The woman was a holy, and I will remember her forever.

Way to the border

Iosu and I decided to cycle a couple of days together, up to Riga, the capital city of Latvia.

That same afternoon we almost advance 100 km, with the threat of a great storm in our back. But we were lucky because in the moment that the rain began we crossed the only one gas station that in the whole road exists.

At night we arrived to Ramygala, a small town which hasn’t any hotel and the sky threatened storms again, so we decided to speak with people of the town to try luck.

This time we went to the grocer’s house of the town, a young guy who was about 30 years old. His name was Ilia and he didn’t speak any word of English but with some signs we could understand each other.

But he was married and his wife didn’t like too much his idea, the house was very small and she stayed all time in her room.

The house was very simple, it had a latrine and it didn’t have running water. After dinner Ilia went to get water with two buckets to wash everything in a bowl which was next to an old refrigerator. He offered us to take a bath with the buckets. But we believe that we couldn’t take a bath without doing a big bundle in his living room, so we thanked him.

Suddenly the woman was in a bad mood and she left the room where their two children were also, she told him something and she left the house; and Ilia back her. They delayed as 30 minutes to return. Definitively she didn’t like us, the house was very humble and there were not comforts. But Ilia take all his family in the only one room and he closed the door.

The following day we woke up early and Ilia asked us to leave the house before his wife wakes up. We took our breakfast as quick as we could and we just were leaving the house the woman woke up. Without a doubt to Ilia that was a nice guy once more he had to face up to his wife.