I was told the Masais were antisocial and dangerous, but meeting them allowed me to break that stupid prejudice and start a nice friendship. They even offered me some milk with blood!!

Along my travel through Africa, I met different tribes, some of them were big, and others weren’t. Many of them lost their main customs and others are still fighting to keep them.

Tribes are like big families that respect a tradition during centuries. A chief governs them, they use clothes and marks that identify them and have their own language.

Since the beginning of my travel, during the days I met the Zulus, I knew that on the east of Africa there was another of the most important tribes of the continent: the Maasais. Original from the south of Sudan and Ethiopia, the Masais occupy the south of Kenya and the north of Tanzania since a long time ago.

Until 1980, their territories, that could have been a nation, were known as “the Maasais zone”. Nobody except the members of the tribe walked into that zone because of their reputation of arrogant, not very friendly and dangerous. If somebody did it he was risking his neck: they could kill him.

Since I left Dar es Salaam to the north of the country I saw many of them, always too serious and with their typical clothes: long and red. I tried to come close several times but they seemed to be on the defensive. We didn’t get to understand to each other, and maybe it was because they weren’t interested in it. So when I arrived in Arusha city, I looked for a translator and we went together to Merelane, a town of Maasais. 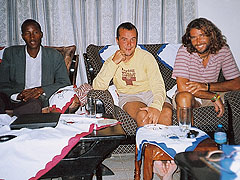 We were welcomed by Lenganasa, the son of a Maasai hierarch, who left his town for some years to study sociology at the University of Dar Es Salaam. Lenganasa was very polite: he invited us to his house and taught us about his people. I still remember that banana stew we ate for dinner. I thought I wasn’t going to like it but I had three dishes.

The Maasais are cattle breeders so they are always looking for pasture. But in the last 25 years they had to leave several territories because of the advance of the agriculture, or the creation of national parks. In this case, they were expropriated with the excuse that “tourists will come just to see animals”.

In these days, the Maasais of Tanzania or Kisongo – as they call themselves – live in a great zone of dry climate, so the kids are who lead the cattle. Every day, they leave at dawn and walk many kilometres looking for water and pasture, coming back at the end of the evening.

Due to the problem of the space, many Maasais are changing their customs, although it’s very important for a tribe to keep their identity and respect what comes from their ancestors, from father to son, from generation to generation.

Some of them are already working at the mines – there is tanzanite around there, a gem that’s very precious in the market – while others are changing the cattle life for the agriculture.

These changes go on altering their most traditional customs and their way of life and many of its people seriously wonder which one is the best option.

Among the Masais there are different categories that mean power and authority. To be promoted from one rank to another, a man has to wait almost 20 years, till the celebration of “The Olng’eher ceremony“.

As in other tribes, when the kids are considered grown up they are circumcised. It’s easy to distinguish them because, for some weeks, they wear black clothes and have a very peculiar make up.

From then on, if the ceremony is near, they are prepared by the Moranis or warriors (first rank) to enter their group.

The Olgn’ener ceremony lasts three months and during this time all the categories are renewed. I was very lucky: my arrival coincided with this ritual. Maasais from all the Kisongo territory had arrived in town to celebrate this tradition, and I was present at part of the ceremony.

The Moranis received the younger boys and transmitted their power, authority and responsibility of the entire tribe to them, because they are, if it’s necessary, which should be ready to fight.

At the same time, after almost 20 years (they were circumcised in 1983) the Moranis left their category and, under oath, were promoted to the next one (Junior elders), whose duty is to Protect the Maasais issues, including their development and the arbitration if there is any dispute. The Junior elders also advanced to the next rank, the Senior elders.

All the ceremony was chaired by the great chief, known as Oloiboni, with his assistants Malagwanani, who are chiefs of the different groups of Masais.

The Olng’eher was celebrated at the base of the holly mountain Endonyo Ormorwark, near Merelane. There, the ancient Moranis admitted all their errors and were forgiven or condemned before joining the respectable group of elders.

It was funny when, in the middle of the ceremony, several Moranis dressed me up as if I were one of them. I was told they wear red clothes because they consider it a powerful and impetuous colour, and relate it to blood and conflicts.

I also knew that they kill cows to eat only for especial occasions, because they obtain from them their daily food: milk and blood. According to their tradition, the fruits they collect in the wild are not enough to be strong, so they stick a lance in the cow’s neck and they store the blood that drains in a sort of gourd to mix it with milk, then.

When I was told about this, I felt loathing and feared the worst. I wasn’t wrong: on my second day with the Maasais, in the morning, Lenganasa took us to a “boma” (a place where some families live in a group).

There, a woman with lots of hand-made jewels had the great idea of giving me a glass of milk with blood. I thought I could say no, thanks, but then I imagined she could feel offended. So I took the glass with both hands, stared at it and convinced myself it was possible to down it in one. I counted to three while the whole family was expecting to see me drink it.

After the third swallow, I must have changed my face in such an abominable way that everybody began to laugh. Then I realized it would be impossible for me to finish it, so I gave the glass back explaining I didn’t like it very much because it hadn’t enough sugar.

Everybody went on laughing and at once a too thin boy, of about 8 years old got close and asked for my cocktail. As soon as they distracted their attention, furtively and with a fake smile, I ran to my bike and looked for my water bottle to take off that horrible flavour from my mouth.

I drank all the water. Later, in town, I bought a soda and ate crisps and cookies. But it was useless: during the rest of the day I was repeating that drink that, as the Maasais assure, is one of the most delicious of their menu.