Cycling Malaysia I felt like being in different places at the same time. Chinese, Hindus and Malaysian people live all together in harmony. The country is modern and multiracial, and its frenetic capital city is just amazing. There I was lucky, I got my sponsors and I was kindly welcomed by the Argentinean community.

From Thailand I took a boat to Langkawi, which according to the Malaysians is one of their favorite places for holidays. The archipelago consists of 99 islands and it is located northwest of Malaysia, in the Andaman Sea. The main beaches of the Langkawi Island are Pantai Cenang and Pantai Tengah where there is also a bustling tourist center that concentrates most of the visitors. Thereby, through a hilly and steeply route I cycled toward there. The place I found is very expensive, like the whole country, especially if I compare it with Thailand or the rest of the Southeast Asia countries. That night I slept in a hostel, in a dormitory with other 20 people. The next day I left to Penang.

Pulau Penang is another island located 100 km further south and its capital is George Town. When I got there I found a colonial city and I met Aabher, an Indian-Malaysian guy who introduced me very well where I was. “George Town was founded in the XVIII century by an English captain, as the first settlement on the Malay Peninsula of the English East India Company which existed for over 250 years, and came to monopolize the trade in South and Southeast Asia. After the rebellion in India in 1857 the company was nationalized by the British government, which further stimulated the growth of their empire. Thus, due to the dominance in the region, the British settlements stocked with Chinese and Indians to work, that radically changed the ethnic composition. That’s why today Malaysia is a multiracial country”.

Walking through Opening’s streets I felt like being in different places at the same time: as being in an old European city, in a temple of a remote city in China, in a colorful market in India or in a beautiful mosque in Middle East. Penang was declared World Heritage Site by UNESCO in 2008.

Towards South, I crossed to Butterworth by ferry and I cycled on the highway to Ipoh. But due to I didn’t get water at the right moment, I had to ride over 40 km to stock up. When I arrived at a petrol station I was almost dehydrated, because that day I had started cycling at noon. Malaysia’s climate is equatorial; at night the temperature never drops below 20 degrees and during day it can reach the 35 ° or more, and the humidity goes over 90%. Malaysia made me sweat like few places, but its route was flat thereby when I had water everything was easier.

People that I met on the road were always kindly, especially Malaysians and people of Chinese origin, which repeatedly offered me fruits, drinks or paid my bill when I was at a restaurant. They always were respectful, but I was really surprised because most of Malaysian people speak English, even in the most remote areas. But one evening, cycling along a secondary route I stopped to buy water in a village near the town Ayer Terjun.

While I rested I talked with the owner of the shop, she was of Chinese origin and I asked her for a place to camp. Next to her shop there was a huge park with a few houses around. It was the police station, so the woman introduced me to one of the officers whom I asked to set my tent. But the officer, of Indian origin was unfriendly and he said no, sending me to the school. The school situated 100 meters far was even bigger, with a huge green and a well maintained park. Due to the gate was opened I entered with my bicycle looking for the guard, whom through signs I told him about my world tour. But the man, of Indian origin too, did not hesitate and I was kicked out, almost aggressively. It was the perfect place. So I returned to the police and I insisted to camp there. And I got it but I had to answer a lot of questions in order to get permission and they finished keeping my passport. I was exhausted. At 6 am, still dark, the same officer came to my tent and woke me up to tell me, “When you leave don’t forget your passport.”

I kept cycling to the south, towards Kuala Lumpur, crossing Teluk Intan and Kuala Selangor cities, where I stayed in hotels. The road was boring because I spotted only oil palm plantations. Arriving to the capital city I met Ewan, a Malaysian guy who received me in his house. He told about it: “Malaysia is the world’s second largest oil palm producer. The oil palm is originated in West Africa and it is regarded as a super plant because its growing is incredibly productive. Its use is most culinary, it serves as added product to other foods such as chocolate, margarine and ice cream, but it is also used in the cosmetics industry, in producing grass for animal feed and as raw material in biodiesel production. Oil palm is one of the main supports of the national economy, but also the main cause of increasing deforestation and emissions of greenhouse gases in tropical forests”. 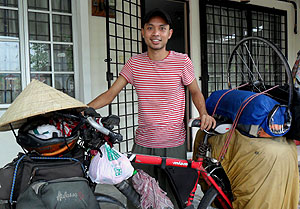 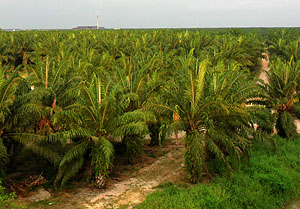 When I arrived in Kuala Lumpur I contacted Juan Aguero, the Director of Impsa, an Argentinean company which is established in Malaysia since more than 20 years. The first time I contacted Juan was during my stay in Vietnam, 9 months ago by a friend. Since then we began to study a contribution to the project: “Around the world by bicycle”. So when I arrived to the capital city, I had his firm support. Juan also introduced me to Miguel Moresco, another Argentinean guy who received me very kindly. 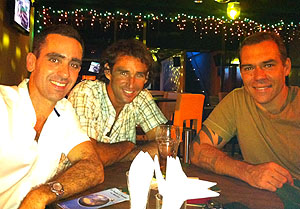 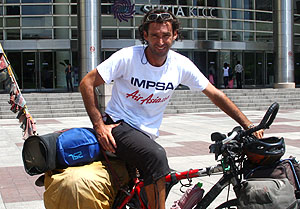 Miguel organized a barbecue with the Argentinean community who also made me a donation. That night they made me feel like at home, I ate good meat and even Havana sweets. In the other hand Mrs. Marisa Rendon and Patricio Kingsland, both from the Argentina Embassy, helped me to contact the media and my other sponsor: Air Asia. Thus, with Azran Osman Rani, the Marketing Manager of Air Asia, we discussed the participation of the airline to the project. Before leaving Kuala Lumpur I was interviewed by the two major television news channels and by the 4 major national newspapers.

My stay in KL also let me know a little bit more about the capital city of the country, which has a population of nearly 2 million inhabitants, which added to its metropolitan area, the population reaches 7 million inhabitants. It is a cosmopolitan and safe city, the Islam is the religion most practiced by the Malaysian and Indian Muslim communities, but there are also other temples, like Hindus, Buddhist, Taoist and Christian. 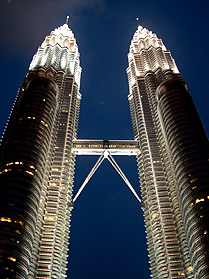 Kuala Lumpur is the economic, commercial and tourism centre of the country. It has a large number of local and foreign banks, insurance companies and according a friend told me, a growing number of Islamic financial institutions and multinational corporations. Walking through the streets I was surprised by the number of malls I found and by the Petronas Twin Towers, which with 452 meters high were the tallest buildings in the world between 1998 and 2003. Actually these are the fifth tallest building in the world, (the first one is the Burj Dubai in Emirates). The towers have 88 floors of reinforced concrete and a front made of steel and glass, and they have become the symbol of Kuala Lumpur and Malaysia.

I left KL heading south on the way to Malacca, cycling through the highway, and due to a light but steady backwind I could cycle 157 km in one day. On my way to the Singapore border the wheel’s rim got slashed, so I arrived to Johor city carrying my bike on a truck. And such a surprise was waiting me in Singapur.