Mayapur is the place where Chaitania Mahaprabhu was born. It is a holy place of pilgrimage for his followers. Based on the Vedic literature of the ancient India he taught how to achieve the highest platform in the spiritual illumination, through the song of the Maha-mantra Hare Krishna.

The Bihar and Jharkhand states are two of the poorest regions in India and except for the Buddhist part which has as the main attraction the city of Bodhagaya tourists don’t use to go there. According people said to me, it is the area with more level of illiteracy and corruption in the whole country, with extortion acts, kidnappings, vandalism and violence among the population. Thereby when I began my cycled to cross this region, I was a little scare, especially when due to the mountains or to the long distances to cover I had to cycle at night time to reach to my destiny. 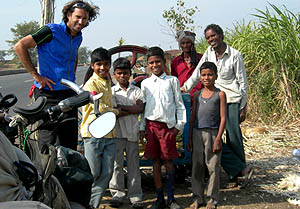 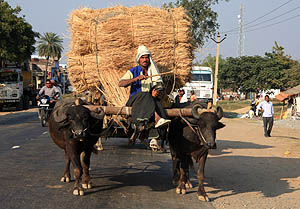 But to cycle through Bihar and Jharkhand states was almost sublime, for the time being it didn’t seem that I was in India because the route was a well asphalted freeway and with few traffic; although it was not strange that suddenly a cow or a truck in opposite way appeared, like a normal situation. The nicest thing was that due to the light wind coming from my back, my speed average overcame the 20 km/h. There was one day that I covered 166 km, it was wonderful. I also found their people very nice, they were always educated and available to help, and they never bothered me on the route neither in the hotels where I stayed. Neither had they charged me extra money, something that is very common that happen along the country. However I suffered, like in everywhere, with the food which is always served too spicy.

After several days on the route I entered to West Bengal state, and from there I cycled to Mayapur, a village located on the banks of the Ganges River, in its confluence with Jalangi River, 130 Km north of Calcutta. 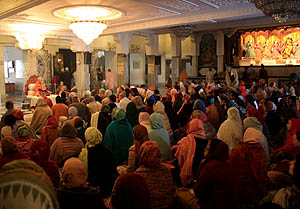 Mayapur is the place where Chaitania Mahaprabhu (1486-1533) was born, and thereby it is a holy place of pilgrimage for his followers who believe that he was an incarnation of God Krishna. Every year a million pilgrims visit Mayapur, most people are followers of the Hare Krishna Movement.

Sri Chaitania Mahaprabhu, is accepted by erudites and theologians like an incarnation of Krishna. He introduced a spiritual movement based on the Vedic literature of the ancient India. He got rid of the caste system restrictions and he allowed the whole people to transcend the social barriers and to achieve the highest platform in the spiritual illumination, through the song of the Maha-mantra Hare Krishna.

According Leopoldo explained to me, a Venezuelan monk who was visiting the temple, the mantra is a pure sound vibration that liberates the mind from its material inclinations. And to sing it or to recite it in silence with sincerity purifies us and it connects us with God, being able to reach a momentous ecstasy that comes from the spiritual stratum immediately.

“Both Krishna and Rama mean The Supreme Pleasure, and Hara is The Supreme Pleasure–Energy of the Lord, that becomes in Hare when it is talked. The Supreme Pleasure–Energy of the Lord helps us to reach the Lord. The song is a spiritual call to the Lord and to His Energy, so that they offer protection to the conditioned soul. At the beginning all the momentous ecstasies will not probably appear”, Leopoldo told me “but there is not doubt that after singing it for a while one is taken immediately to the spiritual level, feeling as first symptom the alive desire to dance to the compass of the song of the mantra”.

“But also to revive the spiritual principles which are natural to all human being like compassion, truthfulness, cleaning and austerity, and to dominate the mind and the senses, the devote ones follow four regulations” Leopoldo told me: “as not to eat meat, eggs neither fish, not to participate in games of chance, not to carry out illicit sexual life (only to procreate) and not to consume any kind of intoxicant, including tobacco, coffee and black tea”.

“According to the Bhagavad Gita, carrying out these activities harms our physical, mental and spiritual well-being and they increase the anxiety and the conflict in the society”.

I stayed in the temple for 5 days that as usual let me to charge my batteries to keep travelling. The community which was created around the temple was plenty of visitors, also the village where the community is. The night that I arrived there wasn’t any accommodation available, so I had to sleep on a game room of one of its hotels. During that days, (end of 2009), the Hare Krishna temple of Mayarpur received the visit of thousands of people; a monk told me that the visitors were around 10.000 people. And I believed him because the whole place seemed the main exit of a football stadium. But at least the whole people not attended the temple at the same schedule, because it has programs during the whole day.

“How different people is in western countries” I though during my stay in the temple, “where people for three or four holiday days move to some place to rest and to enjoy, while here in India people use to go to a temple. Once more the Indian culture was surprising me”.

But my stay was very strange, because during the first days I didn’t enjoy the place, the overpopulation bothered me almost the whole time, so I used to spend more time reading inside my room than outside looking for the possibility to mix with some devout. But by chance, when I was planning to leave I met Leopoldo, who invited me to stay a couple of days more together with him and his wife. I couldn’t say not to him, because he was a real devout. On the following day we were talking during so many hours; and he told me about the histories of some paintings with so many details, I was so interested in each one of his narrations. From one painting he passed to other and then he returned to the first one. And together with them he mixed stories from the Mahabharata verses, one of the two most important Sanskrit epic of the ancient India. Listen the Venezuelan monk was fascinating. He was a true open book. 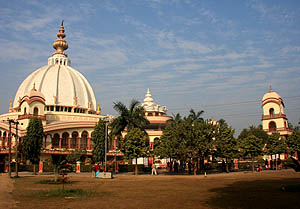 I do not know if his talking influenced me or it was the energy which was provoked by the song of the mantra sang by thousand people who were in the temple; but that morning I felt the power of the mantra like I had never felt it before. I felt indescribable sensations as if the place and its power absorbed me.

Then I had to leave, and I did it thoughtful, reflecting and with the only certainty that the place had already marked me forever. The good thing is that with me would be the books of Srila Prabhupada, the founder of the Hare Krishna Movement, who over and over again would remind me: “the own self is different from the body. Liberation means to know perfectly well this: abandon the false concept of life. The duty of the human being is that of understanding his relationship with God”