Biking on way up I arrived in Nairobi, an enormous city that is 1920 m upon the sea level. Its size astonished me and I was feared at first. There were too many vehicles and a lot of people walking around like ants, a rhythm that only big cities have.

When I arrived in Kenya I felt the same as in any other country in Africa. As soon as I crossed the frontier from Tanzania, I began to have a strange feeling. My body didn’t believe the 10000 kilometers I had traveled. I wasn’t the same person that, a year before, arrived in Africa with a lot of plans to make real, but someone quieter, more silent and observant, who just followed his way. 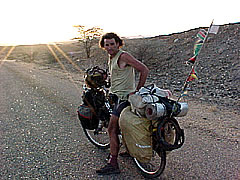 It took me two days to travel the almost 200 km that exists between the frontier and the capital city. At once, I realized that this country was more evolved than the neighbor countries where I came from.

The southern zone in Kenya is a few kilometers away from the parallel 0. The tropical climate and the height give the vegetation an intense green color and it wasn’t so hot, fortunately.

Biking on way up I arrived in Nairobi, an enormous city that is 1920 m upon the sea level. Its size astonished me and I was feared at first.

There were too many vehicles, too high buildings and a lot of people walking around like ants, a rhythm that only big cities have.

Suddenly, when I was going to the center of the city to find a place to stay, I felt as if a locomotive was going to hit me. An intense and long horn, that till then I only associated with trains, stunned my ears. Almost thinking that the worst was going to happen, I turned my head around and realized it was only a matatu.

The matatus are small vans that are used as public transports. It has a seating capacity of 18 and the driver. Two people go accompanying and the other 16 go seated – a little squeezed – in four rows of four seats. The funny thing is that so many people as it’s possible get on, there’s always room for one more. That’s why it’s very ordinary to see matatus going at a high speed with its doors opened and 2 or 3 people hanging.

Each matatu has its name, and it seemed that their names had to do with the fearlessness of the driver: “White lightning”, “Speed”, or “Death or Glory”. At night, they looked more like a night club than a public transport; they have red, green or purple lights inside and loud music , turning the city into a festivity.

As to every Kenyan, living in Nairobi has to do with going after business. As the saying goes “The sky is the limit“, even more in a city with 3 millions of inhabitants.

Nairobi is a place full of contrasts: modest houses, huge mansions, exquisite shopping centers and people from everywhere: African, Europeans, Asians and Arabs. All mixed up, doing business in their elegant working offices or in the main streets. In this city, everything is possible.

Even when I didn’t want to do it, I knew that if I didn’t get on that frenzied rhythm (very different from the one I was living in my travel) in a short time I would suffer one of the worst problems: “the financial one“.

Because of that, once I found a place to stay, I put my baggage away and with my bike I began to visit some of the contacts I kept from my African travel.

I was lucky: the fourth day in Nairobi, the main newspaper of the country published an article about my dream: biking around the world for peace. This fact gave me the possibility to get in touch with some big firms to negotiate their economical support to my project. At the same time, two TV channels and another two national newspapers also divulged my enterprise, and I take the chance to thank all those who help me to go on: Multichoice, Safaricom and Nivea.

A stop in my travel

Biking around the world not only implies to be physically well and go out to the road to bike as many kilometers per day as you can. Starting a travel like this forces me to plan every future stage carefully, find out about the current condition of the roads and their dangers, the most interesting places to visit and, of course, the way to find economical resources to go on.

Because of that, when I arrived in Nairobi after twelve months biking, I thought it would be a good idea to stop my travel for two months to plan my advance to the next continent: Europe.

Although, by my reckoning, I will be traveling for Africa for six month yet, the covered distance showed me the way that the big firms behave and I can’t get away from it.

I remember when in 1999, tired of the routine and bureaucracy, I left my home and my job in Brazil, firmly believing that my new project would keep me away from all that and give me that freedom I wished. But in time I learned that the most intelligent way to get away from the system was not to fight against it but using it a little to reach my aims.

So, at a moment, I left my bicycle in the Argentine Embassy in Nairobi and, with my papers, I changed my cyclist clothes into winter clothes and an umbrella to face the European Winter.