The last 25 km up to Kathmandu were an endless ascent. The route was terrible, plenty of holes, ravines and with a lot of traffic. But we cycled in silence, concentrated and wanting to reach the top to go down to the capital city.

On the road to Kathmandu we stopped in Pokhara, the third largest city in Nepal which is one of the main tourist attractions of the country for being the starting point to the Annapurna, a massif of 55 km which is part of the Himalaya where a series of peaks over 7.200 mt high exist.

Pokhara is one of the favourite places for the paragliding European pilots too who use to come and to stay to work during the whole high season. The city has also the Phewa Lake which is one of the main tourist attractions of the place.

Due to the Monsoon, the rainy season which was still extended in the region Clara and I spent more than one week in the city which offers all kind of activities and services; thereby during our stay we were around by foot, by boat, by bicycle and even by motorcycle, and we got lost in the rice fields which seem to damage the eyesight with their intense green colour, in the neighbouring villages which show the simplicity of way of living of the local people and even in a small trekking on the route to Sarankot. Definitely Pokhara is the perfect place for holidays.

On the road again we cycled to Kathmandu which is 200 km far from Phokara. We took four days to do it. The road was up and down hill the whole time, thereby we often cycled up during hours and then we just took few minutes to come down to begin another time. Nepal is a fantastic country, with incredible and varied landscapes: from the high summits of Himalaya to the deep valleys and rivers that surround them. 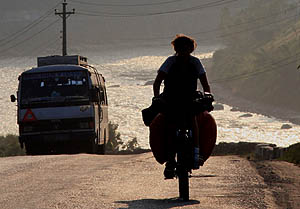 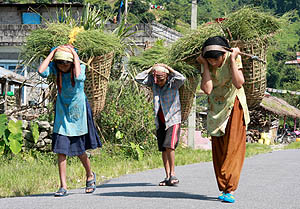 On the half way we camped in the Royal Beach camp, a camping site situated on the river which is well managed by a Nepali guy and his Swedish wife who offer some huts like rooms, the service of a good restaurant and several boats to practice kayak and rafting. And even the place has a nice white sand beach.

The following day because we started to cycle late we didn’t go so far and when the night came we had not still found a place to camp. The route went up and down among big mountains and there was not any flat area to put the tent. Thereby we asked permission to camp in one of the last houses of a small village that we crossed. Then we put the tent, we locked the bikes and we went to the local restaurant. And due to we didn’t understand each other we accepted what they offered us to eat. Thereby they killed a chicken and they served us some pieces of it with rice, it was too spicy. But at least I could enjoy some biscuits like dessert.

In the morning we woke up with the children who so early came to pry, therefore we got up very early, and then I made a magic trick to them what I enjoy as much as they and we had breakfast at the same restaurant. 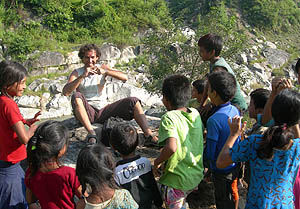 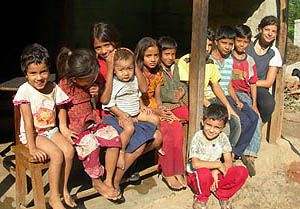 Then we began the last 45 km up to Kathmandu, which 25 were an endless mountain. The route was terrible, plenty of holes, ravines and with a lot of traffic. But we were there, in silence, concentrated and wanting to reach the top.

Then it was an entire pleasure, 12 km of slope down up to Kathmandu, the capital city of the country where more than 1,5 million people live. It seems a city of the middle age with a lot of monuments, palaces and temples; Buddhists and Hindus and all of them with a unique architecture. Durbar Square, Boudhanath, Patan, Lalitpur, the Thamel neighbourhood and Swayambhunath known as the Monkey Temple. We stayed in the city during 10 days and we found it just amazing. 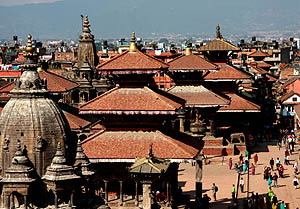 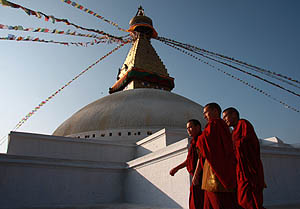 Then, after 5 months, the Clara holidays finished, and she returned to Italy and I returned to India, alone and cycling toward Kolkata.