Colombia, owning a machete saved me

It was 3 in the afternoon, I was leaving Pereyra city and cycling uphill, when two guys tried to bring me down and steal me. Blessed be the hour in the morning I took my machete and put it by hand.

You going crazy? Do you have any problem? I started shouting in the middle of the route, with my machete in my hand, making a fuss. A couple of km back was the city of Pereyra. It was 3 in the afternoon, I was cycling uphill to the south, when two guys who saw me from the other side of the road, approached me. It was a matter of seconds, one of them told the other ¨a gringo¨. This one bigger than the first, think quickly, and across the road towards me. I had no doubt, the guy was coming to bring me down and steal me. Blessed be the hour in the morning I took my machete and put it by hand. That day I noticed that I was in poorer areas, and the eyes of some people put me on alert. In four seconds I got off the bike, I put both feet to stop it, pulled out the 45 cm machete and pointed him just at it had no more than three meters from me.

The guy who had no more than 25 or 27 years changed course with the same attitude, and at 2 meters close he raised a plastic bottle from the floor, making it seems as he colected   to sell them.  The other was coming back further back, laughing, as if to say “this is not a dumb gringo”. I was with the machete in my hand, very nervous kept shouting: “any problem?” And got on the bike and went, almost trembling.

I did not see any weapons, they surely expected to threaten and bring me down. But more than criminals I found them opportunistic and in Latin America there are many of these guys.

Back in 1999, when pedaling in southern Brazil, I made the mistake of entering a big city like Porto Alegre, a Saturday at 5pm. I had to go through an area of ​​favelas (squatter or informal settlements growing around a city) when suddenly I was pushed down by a guy. As the road was flat and I was going fast  I flew three meters away and fell down a small ravine crashing against a rocky floor. I hurt a lot . I had no chance to ask for help to the passing cars because they no longer saw me. So I got up and I tried to defend my bike, against the men who had pushed me, and wanting to fight. But then they came two more guys and one of them pulled out a knife and began to blow with a knife at me. While I was retreating, one took the bike with all my luggage, went on the road and took it to the favela, that was on the other side of the road. Seconds later, the other two guys followed him, and I behind. There was a lot of traffic, the vehicles entering the city at high speed on the three lanes highway, first dodge the offenders with my bike and then me, with my leg bleeding I was yelling desperately asking for help. The scene was clear: it was a steal. And in situations like this, the scandal is the best choice. There was a car stopped, and all other honking. The one who carried the bike just gave up, he was stuck by the weight of it, in a kind of duct between both directions of the highway. The other two guys walked forward trying to disappear from the site. So I ran to the bike, I got on the road, and pedaled into town escorted by who had stopped.

If I compare it with other areas of the world, Latin America is the worst area taking about theft. In Oaxaca, Mexico I knew of an Italian who was stole by a couple, approaching him on the road, both had machete. Another story to a Colombian friend in southern Brazil when they bring him down of the  bicycle, but he fought with his machete, injuring one and breaking into a run to the other. Episodes like these almost always happen by chance, these bad living people think the bike traveler is an idiot ,and try to see if it is easy.

Different is what happens in the north of Trujillo, Peru, where most of the time every bike traveler passing by is approached by two or three guys with guns, they push you into the bushes and with all the time in the world they take everything of value. The latest victim of which I knew was my friend Fran who cycled with me through central america. It is said that the police know who they are, and they share the stolen, because they only care in knowing that it was stolen. Would be great lie to them, so they kill each other.

Except for the episode of attempted robbery, my third visit in Colombia was very nice, like the others. This time, I came from Cuba to Medellin, and continued south. Diego Duque first welcomed me with such warmth that only friends in life do. As Carlitos Carvajal in Jardin with his brother the mayor or Pietro, which is similar to the grandfather of Heidi for living out of town, up in the mountain, in the middle of the jungle. Damn that was difficult to get the bike up there. For a couple of days they escorted me to the south, with a couple of friends. These guys have the passion of cycling and work on several projects to inspire people to pedal. They can be known through the website: www.pedaleandoalma.com

Southbound I visited Manizales, where Mancho and Kumanday people welcomed me and organized a talk of my trip. As in Armenia, with Francisco and his Foundation Covida, or Carlos from Pecas Bike in Roldanillo and Julian with the people from Caracol hostel in Popayan. Everywhere I was very welcome, supported to comtinue my travel. A very colombian feature. 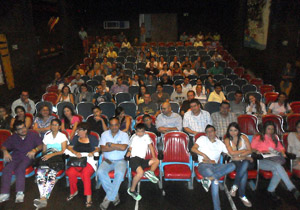 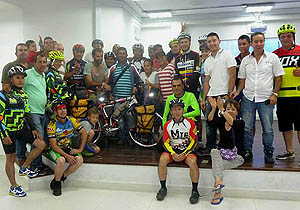 From Popayan to Pasto the  route is very desolate and I geard a several histories from bike travelers that were attacked. Advised by each of the groups of cyclists who crossed by, I decided to take a bus directly to the border.

Colombia is a country where I leave many friends, a great country to visit and pedal. Thanks to all those people who in one way or another, were able to give me a hand to keep going.