During my tour in Canada I have shared the road for a month and a half with Alvaro, the Biciclown. By knowing about the videos that I have been producing since the beginning of my trip, Alvaro offered me to make the script for my documentary. You have a nice story he said to me, and we have to tell it.

I crossed the border Alaska – Canada with rain. After few minutes with immigration police I cycled to Beaver Creek, a small village to look for a place to camp. There I found an unoccupied house that was opened. It was empty, but it just had a bed and electricity and even though, I thought that I could spend the night there, I preferred to endure the cold and the rain under the roof in the back of the house.

Since that night, and for a week, on my way to Whitehorse it has rained non-stop every night and every morning until noon. By leaving Beaver Creek, I have not been as lucky to find a place to take shelter. Every morning I woke up with my tent floating and under rain I had to cycle to the first provincial campsite. But these camping in Yukon do not have a shower, or running water, they charge 16 usd for a plot and they do not care if you arrive by bicycle or motor home, or if the occupants are one or four people, the price is the same. They just have a bathroom and a haven where people usually cook. Therefore, I have preferred to camp out, but every morning I had to stop for a couple of hours in a camping to dry my tent, clothes and have breakfast. It was painstaking work. It is not about the quality of the tent, it is the fourth that I have, when it rains all night water seeps from everywhere. 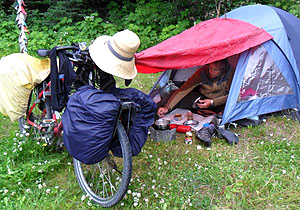 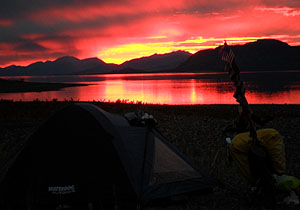 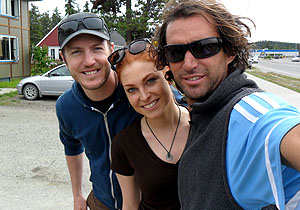 As if the world was rather small, just for me that I traverse it biking, on my way to the capital city of Yukon, I met by chance with Chad and Merja who are from Canada and Estonia. I had met them in Australia a few months ago. So when I arrived in Whitehorse they offered me to stay at their home and treated me like a real friend. But sadly, my time with them was overshadowed by their roommate, head of the house. Suddenly, on the third day, I was ordered to leave the house: “Property owners are not happy with the presence of another person in the house, you must leave today”, he said to me. Both Merja like Chad who just took a couple of months living there were amazed, like me.

But that was not the only ridiculous situation that I have lived in Yukon. One evening crossing a campground I stopped to ask for water and its owner said to me: “your bottle may be dirty with bacteria, if I give you water and you get sick you could bring a lawsuit against me, for this reason I can only sell bottled water”. The woman had told me seriously, so that afternoon, as so often, I asked water to the vehicles on the road while pedaling.

Yukon Province, located in the northwest of the country, is an incredibly uninhabited area and due to the number of animals that there are, people advised me not drink water from rivers or lakes.

But in Whitehorse, when I was in the central square selling my books, I met an Argentine guy who was living there, and he did not hesitate to open his house. Marcelo is a fishing and hunting fanatic guy. “The greatest charm of Yukon is its nearly pristine nature” he said. “Living in a place like this, you can hunt elk, reindeer, mountain goats and even bears, but this need license. The tourism of the place depends largely on this; there are many agencies with organized teams and guides available to hunters. The price of a hunting tour for 5 days could reach 10,000 usd “. 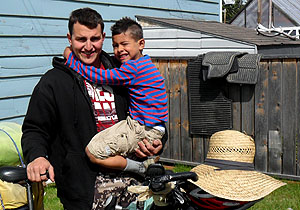 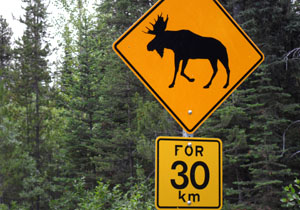 During my stay in Whitehorse I also met Alvaro, the Biciclown, an old Spanish friend who is traveling around the world by bicycle since 2004. Through the city have also passed Lorenzo Rojo (a Basque who pedals the planet for the last 15 years) and Julian (a Swiss guy who was touring America by bicycle). Several days were not enough to talk about a small part of our trips.

From that day and for a month and half I have shared the route with Alvaro, who along his journey, has written 3 books and made 2 documentaries. By knowing about the images that I have been producing since the beginning of my trip, Alvaro offered to make the script for my documentary.

According to Biciclown, I am an atypical traveler. Over the last years, Alvaro has shared the route at least with twenty cycle-tourers, but he has never seen a traveler as disorganized as me. “Every morning you delay three hours to start pedaling,” he used to say to me, “You always arrive late to places and with the bad weather as happened you in Mongolia and Tibet. The way you arrange yourself on the road is part of your uniqueness, there is none like you. I have not found another cyclist who makes 4 meals a day, and each meal means to take your camping stove and all your things. You work more than a Chinese in a restaurant, and after eating, I do not know how you ride your bike.

On your bike you carry 15 cans and even caramel for your pancakes; flashlight instead of headlight and knife instead of can opener”.

“The first time I read about you in internet I asked myself where this guy is going with all those flags, which are nothing more than an obstacle to the wind, but then I realized traveling with you that these flags are like a magnet, how many people have stopped to talk with you due to the flags. And there appears the guy who nobody knows, Pablo “the entrepreneur” that invalidates the disaster side. You are a professional, a fighter. The route has taught you to fight and although you are a traveler atypical due to the way you organize yourself, by the stories of the saddlebags, the bike you have, you are the proof that one does not need the best equipment to fulfill a dream.

You have a nice story and we have to tell it”

Thanks for the hospitality to Chad, Merja and Marcelo in Whitehorse, Wayne in Dease Leake, Jonathan in Kispiox, Lora and her family in Smithers, John in Telkwa, Trevor in Prince George, Bonnie and Curtis in Dunster and Mark in Calgary.