Singapore is an island city-state, the second nation with the highest population density in the world. It is mostly Chinese. Undoubtedly it is one of the most remarkable successes on the continent.

I entered to Singapore walking, with the bike at my side. The rear rim had a crack that prevented me from cycling; the other one was completely worn out, the wheel hubs needed spare parts or much better change them, as well as the chain, the cassette, the pedalier and the pedals. I was aware that if I wanted to keep cycling, Singapore was the place where I had to spend a lot of money. 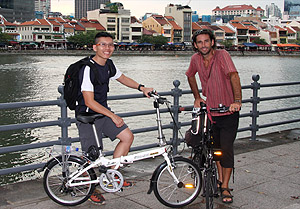 After few meters from the border Swee Kian Tan was waiting for me. SK is a Chinese Malaysian guy, 35 years old who found my website on Internet just 10 days before my arrival to Singapore. After seeing the conditions of my bicycle he put it onto the roof of his car and took me to his home, where he lived with his wife and two children. SK lives in Singapore since long time but he also lived 3 years in Czech Republic. In 2004, back home, he chose to venture cycling 23,000 km in 18 months, from Finland to Singapore, with a friend: Sean. Both of them traveled all time in a very precarious way, they knocked the door of a house every day to find place to sleep. “We crossed Central Asia during winter time, it was very cold and we didn’t carry tent, because we just wanted to relate with people. It was very nice, but sometimes it was very hard” he said to me. Talking with SK, we realized that we had cycled the same route through several European countries, at the same time but in the opposite direction. We couldn’t forget those storms which battered northern Europe. According to the news they were the strongest in the last 20 years. It was very interesting to share our experiences.

Upon my arrival I discovered that SK had worked for 10 years in the Marketing Department and International Trade of Shimano Singapore, the second world’s largest plant of the Japanese company. Therefore SK called his ex- boss, Eugene Koh, the director of Shimano Singapore. A couple of days later Eugene received me at his office to know about my trip. Then he decided to support me, so I left the bike for a few days and after coming back I found it totally new. Aaron, the mechanic had changed all my old equipment for a XT, the rims and the pedals too. They also presented me clothes and accessories. In 10 years, it was the first time that I had a bike like this. 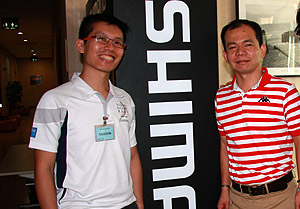 SK was a great guy, he had firsthand experience of feeling the freedom on the road, and he helped me not only because he was identified with me but because it was a way to thank all those who opened the door of their homes.

During my stay in the capital city I became interested in learning about this tiny country, which is the world’s second highest population density. The Chinese represent approximately three quarters of the population; other ethnic groups are Malay and Indian. There are also many foreigners from Western countries. SK told me that the economy is based in industrial activities like electronics and petrochemicals mainly, but also on exports and imports since the country has a seaport that operates the largest volume of cargo a year worldwide. “Everything that goes from Asia to the West passes through here and vice versa”, SK said to me. “In turn, the country is a major international financial center and has one of the highest GDP per capita in the world. But as a rich country, Singapore is a very expensive country, so it is very common in the marriage, both men and women work long hours”.

On my city tour I visited the colonial district, which preserves traces of ancient British government and mixes with buildings of futuristic architecture. Clarke Quay area is a set of old warehouses on the Singapore River known for its great nightlife with bars and restaurants. I also visited Little India, Chinatown and the Muslim Quarter, that hide among its streets different temples and a mosque, the cultural mark of each of these peoples. 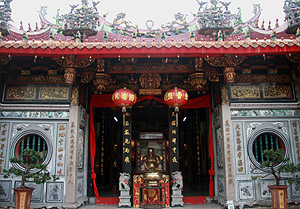 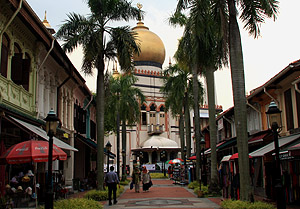 I found interesting to understand how a country that has few natural resources has the water supply for a population that exceeds 5 million. According SK, for water, Singapore once depended primarily on neighboring Malaysia, but now has three additional sources: collection of local watersheds, recycling and desalination of sea water. “Even though at present the water supply is sufficient, the government’s long-term goal is to reduce daily water consumption in the domestic sector, which now exceeds 150 liters per household”, SK said.

During the last days I visited the new Eco Green Hostel which SK together Yong were opened in Bugis area. There, they presented me a guide travel, maps and various accessories for my bike. And they said: “The hostel motto is that all travelers arriving by bicycle will pay half price.”

Few days later I left by boat to Indonesia. SK and Sean accompanied me to the harbor. Saying goodbye Sean gave me a red envelope and said to me, “to the Chinese it is customary to give a red envelope with a donation to those who are traveling. For us it is like a blessing. May luck be with you and take you to your destination; have a safe trip friend “.

I embarked moved, with tears in my eyes; undoubtedly that SK and his friends were special people. Singapore will remain in my memory forever.