The third bicycle and its 78 kilos. 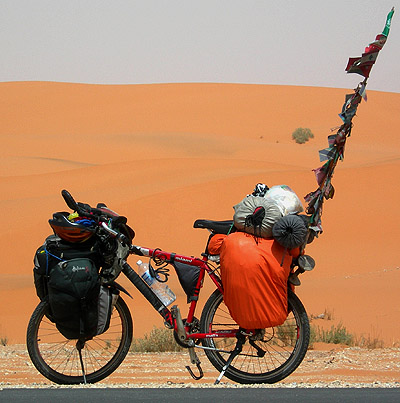 It was gave me in Israel, like a personal donation. It has 27 gears, with a Shimano Deore equipment. It has front suspension, gel seat and the same bicycle rear racks adapted to this bicycle by a real craftsman Israeli. These are a masterpiece, because very often they were giving me trouble. In Vietnam I also put the stand of a motorcycle, by other craftsman or simply someone who wanted to work. Finally I think I will have no such trouble again.

The weight of the bicycle is 23 kilos, including all its accessories, such as the three bicycle locks, the handlebars accessories, the bicycle racks and even some extra screws and washer of every type and size for any case. And the three thermal carafes for water, too.

Then, I carry another 55 kilos luggage, including my tent, sleeping bag, a camping mattress, few tools, three spare inner tubes and a foot pump. About the clothes I carry a cold weather jacket, a rain jacket and a wind jacket. A shirt and three pants, (a sport, a raincoat and one that allows me to go anywhere well dressed). I have a polo neck and several T-shirts (to cycle and to dress), including sleeveless, short and long sleeved. I do not have jeans. I have also four shorts, a swim short and underwear, plus two cycles short, a stretch pant, a pair of slippers, a pair of sandals and one of flip flop. A empty backpack to go to some meetings, too.

I have a laptop, a video camera, a tripod, two photo cameras and a total of 7 batteries with their battery chargers and a pile of cables. Also, I carry momentarily two external hard discs and some CDs and DVDs with different computer programs. I have a press folder to visit potential sponsors, a book with a few photos of Africa and a pile of brochures that are used to introduce the project. Also my diary, in which I write regularly, a small tape recorder for interviews, a couple of books and according to the country I visit a travel guide. Several maps, too. I do not have anything to hear music while I cycle.

Finally I have a small gasoline stove, with a small set of pots, a couple of plates and a set of cutlery. So, all this taken in conjunction with the hygiene items, emergency medication, plus a torch, a mosquito net, repellent and my African knife for “self-defence”, let me to be equipped to go around the world by bicycle.

But in these 55 kilos I still don’t have any food or water. I know, it’s a crazy thing!

The second bicycle and its 60 kilos. 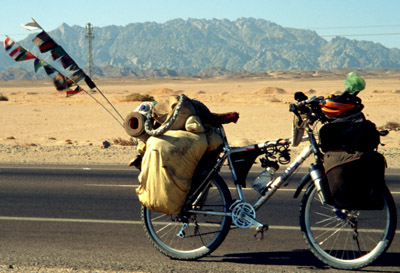 It was donated by Dal Santo team from Argentina. Its brand name is Halley, with an imported frame and Shimano Alivio equipment. With this bicycle I have cycled through Argentina, all over Africa and Europe. But in Italy, on my way to Middle East the internal thread of the frame started to give me trouble; so I had to get another bicycle. However the Halley which cost in Argentina 350 u$s, let me to cycle during five years through 50,000 km, with 40 kg of baggage. It was really a good bicycle.

Through the African stage and big part of Europe I had no laptop, neither many CDs nor DVDs, nor the photo and video cameras which I have at the moment, nor winter clothes and no clothes presentable. Nor travel guide neither book of photos. And the press folder was rather lighter than now, but I always had food with me.

The first bicycle and its 42 kilos. 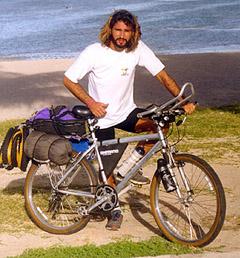 This mountain bike I bought in Maceio, it was my first bike, an unmarked bicycle with an imported frame and Shimano Acera equipment. Only a year later when I got the Halley I realized that this bike was too short for my size. Its price was 150 u$s. However I cycled10,000 km back to Buenos Aires, without bicycle panniers and just with a backpack which fell down all time and with a summer tent which each time that rained water entered. My sleeping wasn’t very warm and thebicycle rear racks was made of iron.
At that time I had no computer and no video camera; just a 35mm photo camera. I didn’t have tools or spare parts, neither a gasoline stove. I had just a pile of illusions and a great desire to discover the world.