I left Kangding (2200 mt) I cycled for 5 hours an ascent of 40 km long to cross the first mountain pass, to 4298 mt. I arrived there super exhausted; due to the clouds the visibility wasn’t more than 20 or 30 m and the temperature was 3 º C. That was the gateway to Tibet
As a postcard: snowed peaks, crystal-clear rivers, stone houses and Tibetan people with their unmistakable features.

I entered China for third time, but this time my days were counted, because the kind of visa I had didn’t let me to renew my stay neither to prolong it. And according to the Argentina Embassy in Beijing if someone doesn’t leave the country in time, he has to pay a heavy fine and probably spend a few days in detention. Thus from Mongolia I travel overland to Chengdu, the capital city of Sichuan province, and from there I programmed to cycle the last 2000 km in China, going through one of the most impressive scenery in the world: Tibet.

In general the concept “Tibet” refers not only to the Tibet Autonomous Region but also the historical Tibet which consists of the former provinces of Amdo, Kham, and Ü-Tsang, but currently they are part of the Chinese provinces of Qinghai and Sichuan. Nowadays to visit the Tibet Autonomous Region is necessary to get a travel permit and visit the area with an organized tour, because independent travelers can not visit the place. But this doesn’t happen with historical Tibet, which has Tibetans population even higher and similarly rises above the 5000 meters. There, one has the opportunity to visit Tibet but without crossing the official border. 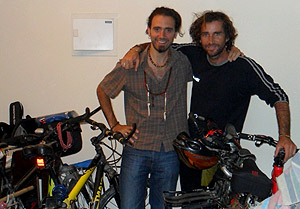 When I arrived to Chengdu I was welcomed by Nico, an Argentine architect who lives in China since 2007. Nico is a fan of bicycle trips, in his first experience he has cycled from Iran to China in 9 months. Talking with him was a pleasure. The architect helped me to find the best tires and the most important he prepared me mentally.

It was mid-autumn when by chance Nico came back from a bicycle trip through Tibet. “You will have long and lonely distances to cover,” he said to me, “the weather begins to be hostile and the climbs seem endless”. Nico diagramed me every day of my trip, the km to ride, to cycle up, to go down, the possible places to sleep, to camp, to eat and even to find water, and he predisposed me to cross the mountain passes. Thus every morning when I started to cycle I was aware of distances to cover and their conditions, so my mind was calmer than ever.

The first days on the way to Kangding, I had constant ascents and descents that extended till 1000 m of altitude, and the weather wasn’t good. It often rained and thereby every night I preferred to stay in a hotel than to camp. Located on the road from Chengdu to Lhasa, Kangding was the capital city of the ancient Tibetan kingdom of Chakla. But today it is the gateway to Tibet, the center of trade between China and Tibetan culture, which is based mainly on wool, Tibetan herbs, butter yak and tea. When I arrived to the city I had a nasty feeling because I found a place totally taken by police, soldiers and S.W.A.T. command; it seemed that a war would break out any time. But it was a celebration of the Tibetan calendar, bringing together thousands of people in the central square, where folk music groups marched.

When I left Kangding (2200 mt) I cycled for 5 hours an ascent of 40 km long to cross the first mountain pass, to 4298 mt. I arrived there super exhausted; due to the clouds the visibility wasn’t more than 20 or 30 m and the temperature was 3 º C. That was the gateway to Tibet. I stopped a few minutes I change my clothes and I eat some food quickly. Then I started to go down slowly because it was very windy and dangerous. But then the sky opened, the wind stopped and the perfect sunlight began to illuminate the Tibetan landscape. As a postcard: snowed peaks, crystal-clear rivers, stone houses and Tibetan people with their unmistakable features. The descent was majestic, for another 40 km. That afternoon, as few times in my trip I felt privileged and I thanked God for being there, cycling and contemplating such beauty.

The road between Sichuan and Tibet is considered one of the highest, most dangerous and beautiful in the world. The route I cycled from Xinduqiao to Litang is in very bad condition; sometimes it is very narrow and has a deep cliff side. For several days I crossed mountain passes which range from 4200 m to 4700, one per day. For some moments I could not breathe, I stopped every 1 or 2 km to rest, to eat something, to drink water or simply to breathe. Nico was right, the ascents were endless. From Yajiang (2530 m) I started to cycle after 8 am and I arrived at the mountain pass (4412 m) at 5 pm. That afternoon I almost didn’t have any descent, but fortunately I found a house of Chinese workers who offered me a room to stay. When I went to sleep the temperature inside the room was 0 º C.

On the road again I was surprised by an endless row of military trucks that honking asked to pass. Their fate was probably a nearby military base or Lhasa, the Tibetan capital city. It is the second that I see so this time I count the trucks, they are 80!

In the last part toward Litang I had no rest; the road never goes down from 4000 m and in prolonged ascents passes the 4700 m. It was very cold and the sky was always covered with low dark clouds. That afternoon snowed for a while, but I could shelter between some rocks. Then I cycled down to a village where I found a small shop. I went in looking for some food but nothing convinced me, so I pointed to the homeowners their pan. And they had no problem; they served 2 vegetable potato pies …delicious. They were nice people; they didn’t want to charge me. At dusk I stopped at another village and I asked to a man for a place to sleep and some food. After a few minutes the Tibetan man offered me an empty house where he prepared a bed with pillows and blankets. He also invited me to his home where he served me three plates of rice with potatoes and yak meat. In the morning his wife served me an excellent breakfast, with warm bread and yak butter. “It is a pleasure to cycle and to meet these people” I thought. 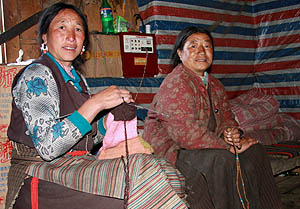 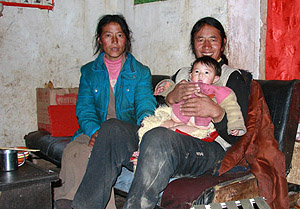