We programmed the voyage for 2 days, we carried enough water and foods; and we left to the road. But in some place we took the wrong road and we got lost. It was funny because we never knew it, until we arrived to another destination, on the third day.

After the odyssey through the desert, we deservedly rested in the oasis Ksar Ghilane, a small paradise village, full of palms and with a nascent of thermal water sources. Truly, after those 100 kms of voyage, to arrive there it seemed as entering to the heaven and its natural pool was as the purgatory. 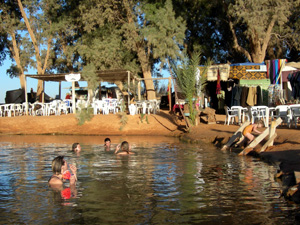 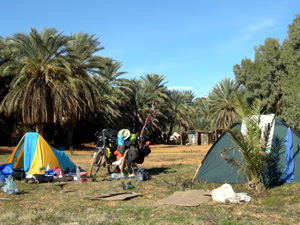 It was December 31, 2005 and another year was beginning. But how long time has passed? I left Brazil in 1999 and I began the African stage more than 4 years ago. If I think about it, I find difficult to believe it.

Due to the big number of tourist, Ksar Ghilane is an oasis that has different kinds of hotels, but none was economic. Anyway we were lucky because the baker of the village, a kind and disinterested man offered us to camp close to his house and that place also was part of the paradise.

Loses in the desert

We arrived at the oasis crossing over dunes and by camels and it didn’t allow us to know the conditions of the roads which reach to the village and we obviously didn’t have idea about the ways which leave from it. But when we knew that from there were only 50 km to the nearest town, we didn’t worry too much, but we suffered too much to arrive there.

We programmed the voyage for 2 days, we carried enough water and foods; and after 02.00 pm. we left trusted on the road. But on the evening we desisted about the idea of cycling at night because the conditions of the route were bad and we didn’t see anything. So after 20 travelled km only, we camped and we searched for so much firewood as we could, “it would be another cold and very long night”, I thought. But it was ok, because the bonfire lasted up to 11 pm. 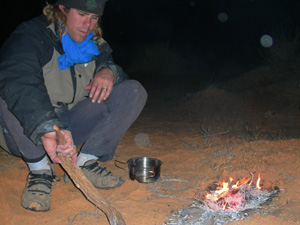 And Ale had the pleasure of kneading bread and cooking it by the Bedouin style. For this he made a well where he put embers, sand and then the bread which covered another time with embers and sand. But later, everything was complicated, the embers weren’t enough and the oven started to turn off, so we had to make another oven. For some moments Ale started to be in a bad mood and me too. We had three fires to check, two ovens to assist and two saucepans, with the sauce and the spaghettis to cook; and the soup still to drink. But Shit!! Who can think to knead bread in the desert and cook it in the sand!!! We sweated too much, but finally Ale got it and although the bread resembled to a sole of shoes full of sand, it was warm and we ate it very happy. In the morning the bread was an authentic stone, but we ate it with the coffee with milk and although I suggested to Ale to throw away the rest of the bread, he kept it to eat in the afternoon with the boiled eggs. That brave!!! 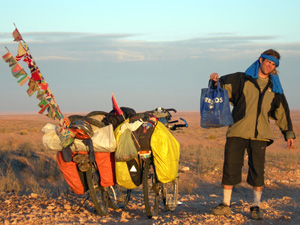 Truly if it would have been for me, many times we had been hungry and thirsty. Because of I carry many kilos I am the kind of person who prefers to have some peanut, dry fruits and to ration the water. But my brother always was who carried 6 litres of water and all the food, “I don’t like to be hungry or thirsty” he told me and it was good because during those days I had neither hunger nor thirst.

In the second day of trip we crossed a man with a four by four, who in French language explained to Ale the way to continue our direction and he also gave us some water. But in some place we took the wrong road and we got lost. But it was funny because we never knew it, until we arrived to another destination, two days later.

That morning we didn’t want to get up, because when the sun only heats up you can truly fall asleep. But foreseeing a difficult day we made an effort and we started to cycle on the midday. And it was a terrible day!! 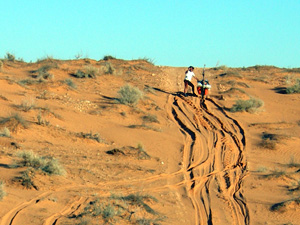 The road that in the beginning was flat and basically of stones it became a road with ascents and slopes with a lot of sand. During that day there were countless the times that we had to drag our bicycles along the sand, and when we understood that we wouldn’t arrive to our destination we began to worry, because we had little food and not much water.

But fortunately on the end of the afternoon, from a mountain we sighted a big construction and we cycled to it. It was a garage where shepherds stored food for goats. After reaching there they offered us to spend the night with them and they also supplied us with some food; that night we ate cuscus and macaroni and it never lacked the tea. I remember that night, it was terribly cold. In the morning when we got up we saw layers of ice on the sand. People had informed us: “in the desert, the temperature at night is below 0º.”

And thinking that we could be hungry on the road again, that morning we accepted to have the breakfast with macaroni together the shepherds.

Finally after three days and 80 km cycled we arrived to Ghomrassen, although our initial destination had been Douiret; and in spite of the cold, the dunes and the madness that had this entire whole itinerary, it was worthwhile and I convinced myself that only two lunatics whom like to suffer, go through the desert with their bicycles.