Once more through Turkey

I entered to Turkey per fourth time. It is a nice country and witness of the best moments of the trip. I have already travelled for more than two years through the Mediterranean countries and what should be a lineal journey for moments is a circular route. Now I would cycle with a friend from Serbia.

And once more I arrived in Turkey, per fourth time. It doesn’t seem that the goal of this project is to go around the world by bicycle. I already take more than two years travelling through the Mediterranean countries, and what should be a lineal journey for moments is a circular route. But why deprive me of the things that I can enjoy, if the trip also is that; because in these last two years I lived the strongest love story of my entire journey and Turkey was witness of it.

I entered to Turkey, this time alone. I had left Europe per fourth or fifth time. Now I was on my way to Iran. 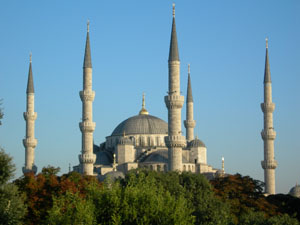 When I crossed the frontier I felt a nice sensation, in front of me a great mosque with its traditional towers like rockets gave me the welcome and its call for the prayer truly was relaxing. But the route, from Bulgaria toward Istanbul was hostile, because during its 300 km I have crossed almost a hundred of huge hills, with endless ascents and quick descents. For this reason every night that I camped in the immensity of their fields I lay down and I restored forces. I remember when I wanted to buy some food and I went to a local shop where there were cookies and sweets only, for it, its owner sent me to another shop where I found bread and tuna which together to a soup that I had were my dinner. I had already forgotten this; that in many places to find food becomes a dilemma.

The arrival to Istanbul was chaotic, ascending and descending mountains for its only entrance, a freeway of 4 lines that its drivers turn into one of 6. It was so difficult, and I felt that if I didn’t pay attention I could be run over.

Once in Istanbul I went to Sirkesi, the neighbourhood of the train’s central station where the cheapest hotels are. There I got a private room by 8 Euros, with shared shower and latrine. A true luxury if I think that I was only to 500 mts from my working place, Sultanahmed; where taking advantage of the flow of tourists I worked rigorously the 15 days of my stay, as if I had a boss, although only 3 hours every morning except when I was kicked out by the police. There, as always, next to my bicycle I sold the story of my trip. And it was ok.

Also in Istanbul I required the visa to go to Iran, but for it I have filled a form with my personal data and those of my family; and then I had to wait 10 days for answering. But they really were very kindly.

I also visited my friend Gonench, I filmed other little the city and once more I visited the main mosques. I surprised when I see all that people going to pray and their faithful. Maybe for west people, Muslims are strange for their traditions and more, but they are better than the western guys who in many case they together their women showing their legs too much or their bust. It is a lack of respect.

In the last days I bought some spare parts for the bike and tyres, also new batteries for the cameras among other things. But I found impossible to buy alcohol to clean the video camera headrest, because according to explained to me it is forbidden to sell it, the reason told me a pharmacist: “so that homemade bombs cannot be manufactured”. Those were the days of an attack in the Istanbul periphery that according to a friend it wasn’t carried out by the Kurdish but by the government opposition who try to destabilize it.

On the way to Cappadocia

Previous to my departure from Istanbul, I received Slobodan visit, the Serbian who had received me in his house during my stay in Belgrade, one month ago. Slobodan had programmed to take his holidays to cycle with me a couple of weeks, something very brave for who has a girlfriend for almost two years. So, together we left Istanbul; and to avoid the big traffic of the city we embarked to Yalova, crossing the Marmara Sea, from where we began to cycle.

But at the beginning Slobodan didn’t have luck, because when we left Yalova, he was hit by a minibus after picking up passengers and a while later in the first great ascent without shoulder of the route, Slobodan once more lost the control of the bike and he fell. The Serbian who hardly had covered one hour of cycling already had two falls and a scar.

The first days we travelled for a secondary route, and it was almost always among mountains, his GPS marked us 1000 ascent mts per day, and less than 100 km. We used to have lunch in petrol stations and we cooked in the nights. In the mornings we tried to start to cycle early, but he used to have a punctured tube. During 8 days of trip Slobodan had 8 punctures. So I had to wait him. We also had some different ideas about where and when to camp. I keep thinking that travel alone is not as bad as it seems. 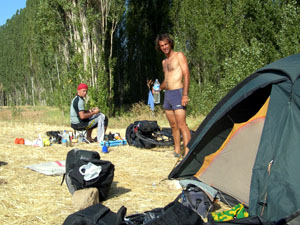 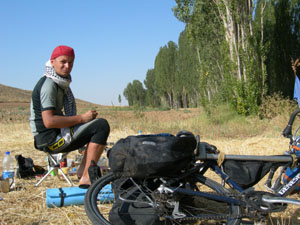 But we also had cool moments and interesting topics to talk, Slobodan is a cultured and a well read person, and everything was interesting, as when he told me about the Ottoman occupation in Serbia or about how people lived in his country during the wars of the old Yugoslavia.

The last day of cycling was the most difficult; the fatigue of 800 km covered without a resting day, the head wind and the route in a constant ascent complicated our arrival to Cappadocia. And for it we arrived so tired, but I convinced to Slobodan to go away some more km and to camp for the last time in the white valley, a place of a surrealist landscape. And poor guy, he was exhausted and he had to drag the bike through 200 meters of sand to arrive to that place, because I wanted to end the cycle in a good place to camp, although for him everyplace was the same. That night there was silence. But at 6.30 a.m. more than twenty balloons were flying the valley and Slobodan seemed a child, screaming to them and calling me to watch them. 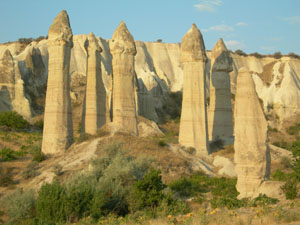 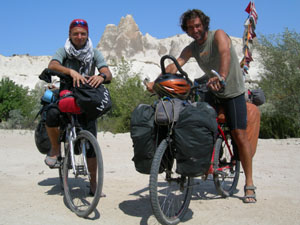 “What I like of this kind of extreme trips is that when I return home I value much more all those things that one possesses but which we are not aware”, Slobodan told me, “as a bathroom, a nice shower or just the bed”.

After a couple of days in Goreme, Slobodan returned to Belgrade, and I started to plan my route to cycle through the east of Turkey on my way to Iran.