According to Mohamed, a businessman from Cairo “Luxor is the worst city in Egypt because of the pursuit that exists toward the tourist. This time to go around Luxor, with a woman, was stressful. 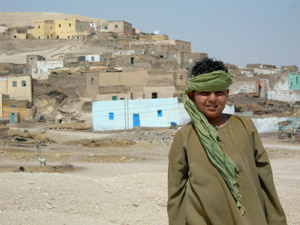 We left Hurgada and we cycled skirting the Red Sea up to Port Safaga, but there a police’s control stopped us and they didn’t allow us to keep cycling. According to the law, the tourists cannot move through the country freely, they can travel only in certain schedules and always escorted by the police, this is the consequence of a terrorist attack in 1997 when more than 100 tourists died riddled to shots in front of a monument in Luxor. By this way we had to take a public transportation up to Qena and from there we cycled up to Luxor.

And in Luxor the Clara’s mood changed, because now we should face the precariousness, the insatiable people’s pursuit, the prices more expensive and the dirt of the city. I remember when we saw that sweeper who scraped from the ground the horse dung with his own hands in spite of having his old broom; we could not believe it. I also remember when we walked among the side streets, the children approach us asking money the whole walk, or those people who wanted to be nice to sell us something, saying to us a hundred times: “hello, hello, hello, hello, where are you from?”. And we missed our patience.

And by this way, among so much annoying people it doesn’t lack “the disrespectful one”; that morning we took a felucca, a typical boat to cross the Nile and when we disembarked with our bicycles Clara who walked alone, only few meters in front of me, was called to test a Egyptian man, but she was clever because at once she told me to leave the place in spite of I insisted to know what did that man have told her. So I passed a long while asking her about, till her fatigue and only when we were very far she told it to me. So my rage lasted the whole day and it was good because when we returned I was still furious and when I saw the same felucca-man wanting to bring near Clara and smiling ironically to her I went to him and with a finger on his chest I began to provoke and to threaten him. And he didn’t like it, there were a lot of people around and a big confusion broke out, till Clara was offended with me, also his co-workers who onlookers tried to calm down me, although none knew what we were discussing about,… but as all of them are old wolves, they surely imagined it. 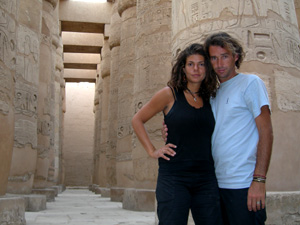 Days later we returned to the other side of the Nile and when the same man recognized us in the landing area, he disappeared at once; I still remember his face.

In general the Egyptians don’t want problems with the tourists; the police can be very hard, although a lot of people who work with tourists are very villainous, but also fearful.

Days later Mohamed, a businessman from Cairo who often travels to Luxor, told me: “Luxor is the worst city in Egypt because of the pursuit that exists toward the tourist, and according the area of the city that one walks, you can find different types of sexual services, there are areas that are characterized by those who attend to the old single ladies or to the gays, and surely to all the varieties.”

And it was sad to know that the true cause of so much contamination in the local people is the tourism, but it is true, because cycling toward the south, skirting the river Nile, people who don’t have contact with the tourist are very nice, although there the fool never lacked.