When Clara and I arrived to Matura and we cycled to Vrindavan I understood that we were in one of the most sacred places in the whole India and the world too, because it is believed that 5000 years ago this place was where Krishna was born.

Vrindavan, the most sacred place

Along my trip I learned about the beliefs of African tribes, I met Protestant Catholics and evangelists, I heard about spiritualism and even I met a faith healer who was acclaimed by the conviction of thousands of people. In Middle East I learned about the Islam and the Judaism too; and when I arrived in India I knew the Sikhism, the Hinduism and the Buddhism.

But when Clara and I arrived to Matura and we cycled to Vrindavan I understood that we were in one of the most sacred places in the whole India and the world too, because it is believed that 5000 years ago this place was where Krishna was born.

For the main Hindu traditions Krishna is one of the main incarnations of Vishnu, (the God of the preservation of the world) but for the Vaisnavism (devotes of Krishna) Krishna is the source of all material reality as well as of the divine incarnations, and therefore He is seen as the “Supreme Personality of Godhead”.

I knew the Hare Krishna Movement in 1999, when I began my bicycle trip in Brazil. It was at that time that tired of my daily routine I wanted to discover other philosophies of life, thereby I was interested in the Hare Krishna monks, after a good friend advised me to go to visit them. They lived in a community 20 km from Caruaru city, in Pernambuco state, on the top of a mountain 800 mt high, almost isolated. There I stayed more than one week, where they received me in a very warm way, and although under a regime of austerity they invited me to their daily programs transmitting me their teachings. Therefore when I left the place, I was never the same again. To my departure of the community that by chance was the beginning of my trip around to the world by bicycle the monks presented me a Bhagavad Gita which I carry until today with me and a Hare Krishna rosary, according to them, so that they protect me and illuminate me. Thereby to be in India and to arrive to Krishna’s place had added value for me.

The International Society for Krishna Consciousness (ISKCON) has as main aim to promote the well-being of the human society teaching the science of the conscience of God (the conscience of Krishna) in accordance with the Vedic Scripture of India, especially the Bhagavad Gita.

The Bhagavad Gita is the essence of the Vedic knowledge and one of the biggest philosophy and spirituality classics of the world. It is presented in form of a dialogue between Krishna and Arjuna in the middle of battlefield. Arjuna represents the part of a confused soul on his duty and he receives illumination directly from Krishna who instructs him in the Science of the Self Realization. The Bhagavad Gita is a book directed to the conditioned souls which don’t have knowledge of the spiritual life.

According to the teachings of His Divine Grace A.C. Bhaktivedanta Swami Prabhupada, (the founder of the Hare Krishna Movement in the western countries), all the human beings in the material world are distressed, in certain way for some type of torment. The cause is the desire to gratify the senses and thereby we have to transmigrate from one body to other, what is known as reincarnation.

The first lesson in the Vedic wisdom is that we are not body, but spiritual soul, particles of the Supreme Spirit, but because we forget our true identity we identify ourselves with the body. Thereby our current body is the result of a long series of actions and reactions experienced in this and other previous lives. This law of nature is known in Sanskrit as law of karma, in simple words: each action has a reaction. The one who acts in a fair way receives good results in the following life, and the one who acts in a negative way has to experience adverse reactions in this same life or in a next birth.

The Bhagavad Gita also exposes the different kinds of yoga and meditation to get rid of the law of karma and to obtain transcendental knowledge, and It explains the three modes of material nature and the perfection of renunciation.

The Gita has always influenced to the thinkers of India, as Mahatma Gandhi who said: “When doubts take possession of me, when I face visibly with deceptions and I don’t have any hope left, I resort to the Bhagavad Gita and encounter a verse which comfort me. Then I begin to smile amid overwhelming sadness. Those whose meditation is inspired by the Gita will feel a happiness that is renewed to each instant and they will discover new meanings to each reading”.

Our experience in Vrindavan was strong; people use to say that it is a sacrosanct place and that it takes the entire bad and good thing out of oneself, as any other place. Perhaps thereby we didn’t find Vrindavan as a common place; because it put us on approval; because, due to the difficult daily routine of India and to the life together 24 hours a day our relationship was growing stale but we knew how to react and although at the end we didn’t believe it we left the city as usual, together and hand in hand, but this time more than ever; and although for some days without the bicycles.

Tired of the bicycles and of the difficulties that imply to travel with them in a country where everything is precarious, dirty and overpopulated, we decided to leave the bikes in Vrindavan and to venture the last three weeks of our stay to visit the places more interesting which we had read, therefore we bought a backpack and we travelled as two simple tourists, or like Clara used to say like normal people.

The first city was Agra, where we visited the Taj Mahal, the temple which was built by a Mongolian emperor in the XVII century to commemorate his second wife who died giving birth to their fourteenth son. At the moment the construction which lasted 20 years is the monument most visited in the whole country. At the beginning when we arrived to the city and we saw it from a distance I didn’t find it great thing, but after entering I really found it astonishing. 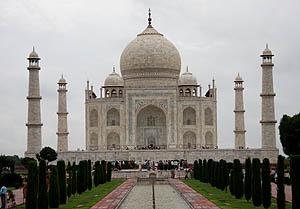 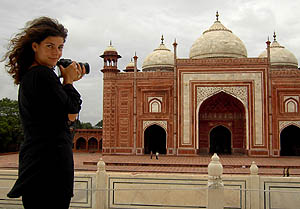 Then we left to Jaipur, the capital city of Rajastan state which according to some travellers it is the most beautiful part of India, due to its “fabulous desert”. The trip delayed 6 hours to cover the 200 km, in spite of the fact that the bus was going on the freeway. I could hardly believe it!

Jaipur is a city of 3 million people, but it doesn’t seem from India, because it is much more civilized and clean, its people are calm, they don’t sound horn and they don’t bother the tourist to sell something. They truly are gentlemen. There, we visited the Amber fortress and the old city which stands out for its main bazaar with all their shops painted of pink colour. Then we kept travelling.

When we arrived to Udaipur I began to miss the bicycles and to wonder why we were visiting those places which are invaded by tourists and related by the guides like a place of fable, when in fact they don’t have anything. And Udaipur is one of them, because it doesn’t have anything, except a palace and a lake where a picturesque and expensive hotel exist but which is forbidden to visit. So we left the city on the following day, as two real tourists, as those who spend more time on a bus than visiting a place, and we felt sillies.

But finally after 15 hours of travelling we arrived to Jaisalmer where everything seemingly would change. The old city is the most interesting part; it is fenced by a wall which shelters a palace, some temples and small hotels. The fortress is a labyrinth of narrow streets located on a hill 80 mt high and thereby with unique view of the place. From there we hired a camel safari, a two days and one night tour to the desert, which really is not so deserted. The only good place was the giant dune where we camped at night. Clearly that after having travelled through the Danakil desert in Djibouti, the Sahara in Tunisia and Wadi Rum in Jordan; we found it hardly a place to carry tourists. 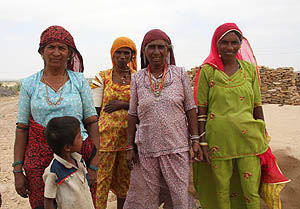 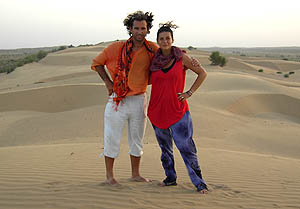 Then we travelled to Delhi where we received my brother’s visit who mixed his holidays with some business, thereby we visited all the markets of the city again. There we celebrated the Clara’s birthday and we also went to the amazing Jama Masjid mosque to attend other Ramadan which always is a unique and wonderful ceremony. Then we returned to Vrindavan, we took our bikes and we went to Varanasi to spend our last days. 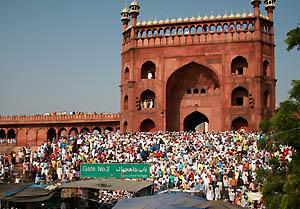 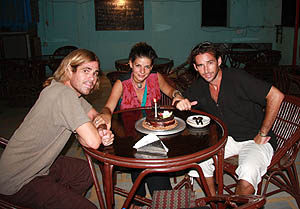