When I arrived to Amritsar I went to the Golden Temple, where found thousands of faithful. There, Sarain, a man with long beard and a turban on his head came closer to me and in a good english told me about the Sikhism and where I was.

Finally I arrived to India. It had already passed more than 8 years of travelling and waiting; I always wished to visit this country and to discover perhaps the country most mystic of the world. I was enthusiastic and curious due to that I was in the cradle of the civilization; in the land of the sacred places; in the house of the Gods and because of it in the place too, where many of the travellers who visit the country are connected in a spiritual way.

But during my journey through India, I also noted that the country has a shocking poverty, that its bureaucracy can be irritant and that its people at times transforms the simplest duty in that really unexpected.

“Incredible India” is the slogan that the Tourism entity uses to call the travellers of the whole world. I knew that here, neither my entire experience counted nor everything that I had already seen before because India is an unique country and it would be a hard test to surpass.

The Sikhism and the Golden Temple in Amritsar

I entered to India from Lahore and despite that many Pakistanis had said to me that the routes in India would be worse than those of Pakistan, when I crossed the border and I started to cycle through Punjab State I felt a relief, that lasted me for some days of cycling, because the route had few traffic and shoulder, and because the small populations of the secondary roads are incredibly clean, not very crowded and greens. “It is not the India that I have heard”, I thought. But then, on the way to Delhi things changed, everything was more India, a real mess.

My first stop was Amritsar, to visit the Golden Temple, known like the holiest place of the Sikhism. According they explained to me the Sikhism is a religion which harmonizes the Hinduism with the Islam, founded by Guru Nanak at the end of the XV century in Punjab (region actually divided between Pakistan and India); and It is born as reaction against the system of the castes and the control exercised by the Brahmans (member of the priestly caste) in the religious places. The basic doctrine of the Sikhism consists of the belief of an only God and on the teachings of its ten gurus, compiled in the sacred book of the Sikhs: “The Guru Granth Sahib”, considered the tenth first one and last Guru. 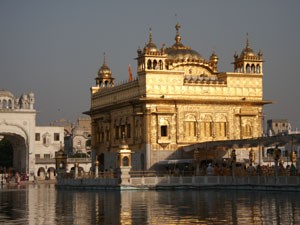 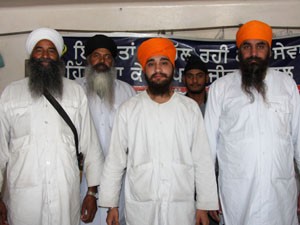 For the Sikhism, God is eternal, the Creator of the world and of the human beings and should be ours target of devotion and love. The Sikhism teaches that the human being is separated of God due to the ego that characterizes him. This ego does that stays in the cycle of the reincarnation and that doesn’t reach the liberation, what for the Sikhism is known like the union with God. The Sikhs believe in the karma, according to which, the positive actions generate positive fruits permitting to reach a better life and a spiritual progress; in the meantime the practice of the negative actions carries to the unhappiness and to be reborn in forms considered inferior, like in the shape of plant or of animal.

In the course of his teachings, Guru Nanak carried out various miracles and maintained that the constant meditation and murmured in name of God is the best way to obtain the illumination.

When I arrived to Amritsar I went to the Golden Temple, where I found thousands of faithful, but I was lucky because Sarain, a man with long beard and a turban on the head came closer to me and in a good english showed me where I could to stay and invited me to see the temple with him. So, once that I left my things in the common room for foreigners I left to walk with Sarain, who very enthusiastic carried me for everyplace of the temple hand in hand.

He explained to me that the temple which is surrounded by an artificial lake (subsequently known as Amritsar that signifies Nectar of the Immortality) has 4 entrances, one for each side, in order to welcome to the travellers of every directions and religions, meaning acceptance and opening. According to Sarain before entering to the complex the pilgrims must to take their shoes off, to wash the feet and to cover the head. Then who desires can submerge in the sacred water of its lake, which surrounds the Harmandir Sahib, the place where the Sri Guru Granth Sahib is, the most sacred literature of the Sikh religion. 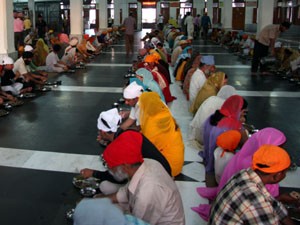 Its three pillars are: to maintain God present in the mind in every moment, to reach the sustenance through the practice of an honest work and to share the fruits of the work with the poor.

During my stopover in the temple I also went to eat to the lunch-room, which receives free to more than 15,000 people daily and that is open 24 hours. The temple was the most beautiful and well organized that I have seen in the country, with a hotel inside, with permanently clean bathrooms and even fans in the galleries. And all attended by volunteers. Impressive!

On the afternoon that I left Amritsar, I had to face a strong wind storm and because of it I had to stop and wait a while. Then I stopped in a small hotel on the route, where I suffered with the food, it was super spicy!! It doesn’t matter if I ask it without pepper and chilly, they serve me it as they want, inedible for me. But after cycling an entire day and without options to choose, I have no alternative and I have to eat it. When I leave the table my lips burn and clearly that I do it in bad mood.

Mi way to the south carried me to Chandigarh, a very different city in the urban panorama of India. According people explained to me, Chandigarh was planned by a French modernist architect after the division of India, in a perfectly geometric form. Today its streets aligned, green and clean have new hotels, big shops and bars where especially the local youth frequents to the best western style. There I visited the Nek Chand Fantasy Rock Garden, a park of 20 hectares that has small paths as a labyrinth which leads to a nice waterfall and to various amphitheatres where sculptures made with the urban and industrial recycling of trash exist. Today the garden is one of the most important projects of recycling of all Asia. 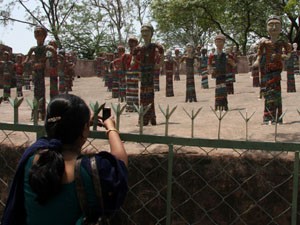 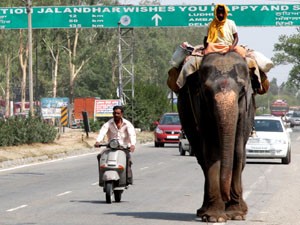 Cycling to Delhi I crossed an elephant, I could not believe what I was seeing, but it was there, on the freeway with its rider and among buses, cars and motorcycles, as “nothing”, as if it were another way of transportation. Incredible India!!!

I also stopped in Kurukshetra, the place where is believed that Krishna recited the Bhagavad Gita (the one that is known like the jewel of spiritual wisdom of India) to advise his friend and prince Arjuna before the battle of Mahabharata, near 5000 years ago. Krishna is one of the most popular and worshipped Gods in all India. Infinity of legends, songs and paintings that represent his life and feats exist. The Sri Krishna Museum of Kurukshetra is full of modern and old representations that according its guide explained to me, they were carried out by artists of all the subcontinent with different materials, like stone, wood, bronze, ivory, silk and leaves of palm tree. I found it fascinating.

In my last night on the route I arrived to Panipat a town situated to 90 km from Delhi, where I stayed in a small hotel that only had a room free in the second floor. I believe that I sweated more in carrying all my baggage and the bicycle to there than during the whole day of cycling. It was plenty of mosquitoes, but at least I had my mosquito net. 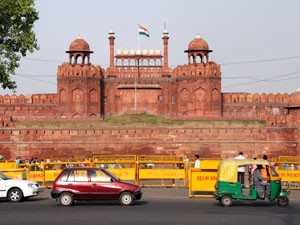 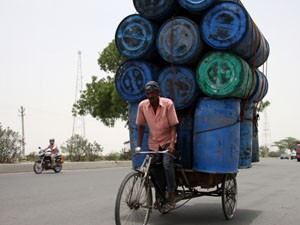 The next day I started to cycle early and after middle noon I arrived to Delhi, with more than 40º C heat, there I had a hard cycle among all kinds of vehicles and some cows, but finally I reached Majnu ka Tilla, a Tibetan colony where many simple hotels exist and that due to its location, it is the perfect place to avoid the confusion of the city.

In Delhi I stayed more than 10 days, watching the city and preparing everything for the visit of someone very special.