Kangaroos, snakes and crocodiles are some of the animals more common in Australia. What I never thought was that I have to face up to a handful of rattus villosissimus which surrounding first my bicycle and then my tent with the intention of eating the best of my food

When I arrived in Mount Isa I stayed at Ralf’s house, an Australian who rents rooms for those working in the city. According to Ralf mining is a major tool of economic development for the country, and Mount Isa mines are considered the most productive single mines in world history. These are based on combined production of lead, silver, copper and zinc. “For those who have a profession and work in the mines, pay can be as high as US$ 50 an hour,” said Juan, a Philippine who for months, worked in the mine. “At the moment there are 5000 people working there, and come in all nationalities. But 5000 is still not enough. The Australians do not like work, As soon as they get money, in two or three months, they quit. The Australians does not know what poverty is”.

On my way to Townsville, on a moonless night I stopped to camp in the middle of nowhere. I set up the tent, I self-sanitized and started cooking, while a strange noise that came from behind the bushes, made me uncomfortable and worried.

I had already seen hundreds of kangaroos, almost all killed on the road, too, some had approached the tent while I slept. But I had also seen snakes on the road, perhaps they were the ones who hid behind the bushes, or even worse… crocodiles. The Northern Territory is an area full of crocodiles. In the sea, people can not swim because of this and in swampy areas it obviously is not advisable to camp. But because it was night, I did not know where I was. So, I went to investigate this strange noise, but whatever it was, it left. Later that night, I heard a noise again and from inside my tent, I shone the light of my torch on my bike. Two rats sat on the handlebars of my bike. They were about to start biting the food bags. So, with more disgust than courage left to fight for what was mine and quickly took the cakes, bread and cheese that had little odor for days. In an act of courage I took everything in, but after a while, a handful of rats surrounding the tent and looking for ways to enter. I confess I thought I’d give the cheese, but was faithful to my principles, and despite the noise, fatigue got the better.

The next night, on the border of Northern Territory and Queensland states while looking for a place to camp, I saw a bunch of rats again. “No way for camping here,” I thought. I could not believe it, there were dozens and dozens of rats that were scattered on the road and as I got faster they disappeared. It was a constant movement of rats, who accompanied me for 20 or 25 km route. At 9.30 pm, after covering 128 km came to Nelia, a village that only had 4 or 5 houses. Then I was approached by a dog and its owner, which fortunately, allowed me to camp in a garden. In the morning, Eric offered me a shower and a hearty breakfast: 6 fried eggs with toast, and while I devoured Eric told me about the rats: “The rodents known as rattus villosissimus, live in the plains in northern Australia but this year due to heavy rains that have affected the region (the worst in decades) have been reproduced in mass and have expanded to the city of Alice Springs, located in the center of the country. Some of these rats reach a length of 30 cm. According to scientists a single female can produce more than 200 babies in a year. Its population explosion is capable of increasing scale and lead to its rapid spread across vast distances”.

On the road again, crossing Charles Towers city I met an old friend, the Biciclown, the Spanish clown who is traveling the world by bicycle for over 7 years. By chance I had stopped in the middle of the street to look at a window and even though his bike was just one meter away from me, I didn’t see it. In the shop was Alvaro, who quickly came to see me more than surprised to greet me. I felt an immense joy to find him. We had bumped into each other Thailand and Mongolia, but due to time and the route, we each went our own ways. This time the surprise was greater, because we were both going south. Thus, during the following 1500 km route, we spent together; we shared so many nights of camping stories. 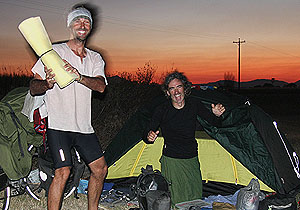 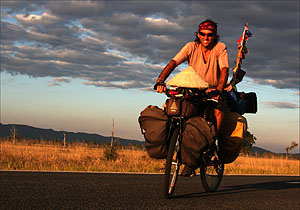 Since my visa was ending, I said goodbye to Alvaro and kept riding alone. When I arrived in Brisbane I was welcomed by Lucila, an Argentinean woman from Cordoba who received me as a mother. Schnitzel, cakes, Shepard’s pie and lentils, were some of the homemade delicacies Lucila had known that would entertain me. During my stay in the city I contacted the organizers of the Brisbane Writers Festival, the event of one week, which aimed to promote the work of new and known writers. I was excited, because for the past four months had been working on a book about my trip. The objective was to raise money to visit my family and then buy a ticket to North America. So I printed 500 books in English and asked to rent a booth so I could put my bike to exhibit. This involved my Embassy and a couple of friends, from New Zealand, who had been part of the festival committee a couple of years ago. But the answer surprised me, I was told that my presence at the festival could cause a conflict of interest with the other authors and therefore could not afford to be part of the festival. My friends David and Steph could not believe it, and ashamed, they apologized.

When I got to Sydney I asked about the different markets, where I began to sell my booklets. I also attended the national celebration of the National Chilean day and Argentinean meeting and parties. Aerolineas Argentina gave me a good discount on airfares to my country. I also got a donation from Invap, an Argentinean company based in Australia.

Fortunately my stay in Sydney could not have been better, I first met the love of Laura and her family and then with all the warmth of two gauchos, Rodolfo and Nancy. 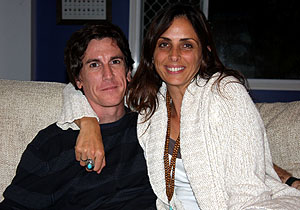 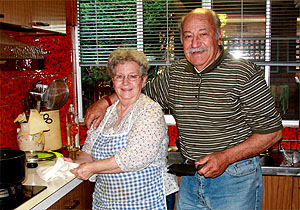 I also thank Rowen from Katherine, Jay from Townsville, Mike from Ayr, Tim and Lans from Mackay, Tamara from Gin Gin, Ignacio Falcon and his family from Brisbane, Tadeu and Alex from Gold Cost, Esteban from Byron Bay, Lachlan from Coffs Harbour, Kate from Kew and Paul Kay from Sydney.