The sun began to go down, and with that delicate darkness, all those doubts that I had after the advice of that man woke up again. Doubts that were strengthening with the different noises that arose behind the bush. So I began to feel fear and to pedal faster.

Three years ago, when I began to project my travel, the first thing that I made was to sit down in front of many maps from all over the world. I never knew why, in spite of not knowing anything, at once I chose Africa as the first continent to conquer. Perhaps, unconsciously, I felt that there I would find the most extraordinary adventures.

Already on the road, I felt surprised about different tribes of Indians that still maintain their more primitive customs. I could meet several villages where their people only live on what they produce and many times under the most precarious conditions.

But along my journey, a question always persisted in my interior: What will it happen if I meet with some animal? My innocent answer was simple: “They are not in my road; they are confined in national parks.”

Pedaling for Africa I passed several reservations and I could visit some of them. I am not a great admirer of the trips in-group, but anyway I had to get into a 4 x 4 van to appreciate the wild life inside the park, being impossible to make it with the bicycle.

It is difficult to know, for the person who travels a long time for this continent, which are the best parks to visit, since the industry of tourism has grown too much and the alternatives are a lot and repetitive, too.

In Maputo, Mozambique, I knew a Belgian called Van that came traveling from the north of Africa and worked with the tourism. He, quite experienced about the continent, told me that only three national parks are different because of their variety and quantity of animals: the Kruguer in South Africa-too expensive for me to visit-, the Serengeti in Tanzania and the Luangwa in Zambia.

According to Van, the Kruger and the Serengeti concentrate the biggest flow of tourists since both countries also offer beaches as an alternative, as long as the Luangwa Park in Zambia, although it has a great variety and quantity of animals, is not visited by so many people, and as a result of this their safaris are more captivating. And, fortunately, it has a more accessible price. 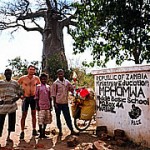 I left Malawi via Lilongwe for asphalt route with some slopes. When I arrived to the frontier I could enter to the country with the visa that I had already processed by means of people of Makomo Safaris.

While I breathed I could feel the change of the air. The vegetation was thicker and the heat had increased. I went to Chipata; a small city located 20 km from the frontier. I found impossible to find a cheap place to sleep, but they informed me that I could stay in the rooms of the Ministry of Education. I was lucky, I was very well received and there was an available room, where I settled before the evening.

Face to face whith an elephant

I left toward the Luangwa National Park early in the morning, because I should travel a great part of the 135 km along a road of ground. I knew that I won’t find food along the road, so, the previous day I bought myself some chocolates, peanuts and dry fruits that I loaded with my baggage.

I sometimes stopped to talk with people of the place, and they were very friendly. I met a family and their shack, an atypical construction similar to some cartoon that I saw when I was a little boy, surprised me

The boss, when I told him where I was going, warned me about the possibility of crossing with some elephant or rhinoceros. He explained to me that these animals sometimes crossed the river and they came closer to the road. “Don’t fear!! ” he said ironically, “just stop and don’t turn your back on him “. I thought that he was joking and I said goodbye among laughs, but also with some doubts.

With many hours of daylight ahead, I stopped once again to film a choir that sang every Sunday in the house of one of their members. Finally, at about 10 km from the park, I punctured the back wheel and due to some problems that I had with the inflator I took a long time to repair the inner tube and return to the route.

Then, the sun began to go down, and with that delicate darkness, all those doubts that I had after the advice of that man woke up again. Doubts that were strengthening with the different noises that arose behind the bush. I began to feel fear and to pedal every time with less care, not paying attention to all the stones that were on my road.

… And suddenly I understood that what that man had told me was not a joke: there it was! On my left, in a hole among the bushes, an enormous elephant with their ivory eyeteeth, perhaps eating, perhaps resting, perhaps surprised by my bicycle and me.

What did I do? Fortunately, my road continued toward the right, and without remembering the advice that that man had given to me I just did what my instincts dictated me: disappear as quick as I can pedaling to the maximum of my forces. I ignore what happened with the elephant, or I escaped very quickly or It also got scared and had similar instincts to mine.

Finally, when from a distance I could see the first lights of the camp and I was totally exhausted for this adventure, I punctured the back wheel again. I was at only 500 meters from the camp and because of the previous circumstances; I didn’t even try to repair the wheel. I only tried to inflate the wheel to be able to arrive biking, but the puncture was too big and the wheel didn’t resist. In spite of the fatigue I had carried along the 135 km, the desire to arrive was like “a can of spinach for Popeye” and I carried as I could my 60 kg bicycle, lifting it so that I didn’t drag the punctured wheel. With a lot of strength and some prayers I finally arrived near the door where I received help to enter the camp.

It seemed that my senses still looked for more adventures. I hardly arrived, and after they told me again about the elephants that were around the camp, I prepared my tent on a tree ,as the watchman of the camping site indicated me.

Lions, leopards, giraffes, zebras, different species of antelopes and many more species. I went twice to the park, where I satiated, as every tourist, my desires to see different species in their natural habitat.

They were three fabulous days hearing the hippopotamus that lived in the river that separated the camping site of the park, or seeing quantity of monkeys with whom I shared my habitation and I should take care of them since they messed my things in search of food

The emotion during those days there was very deep. Although, that’s for sure, anything could resemble to what I felt in my arrival to the camp, when, on my bike, I met face to face with that enormous elephant.