Zanzibar is an almost perfect island. As soon as I arrived there I realized this place is only to rest. There you can find everything …and even something else.

Zanzibar is said to be the pearl of the eastern coast of Africa, so when I was only a few hours away from its coast, I put my bike on the ferry boat and went to know it. It is a big island that’s 100 km long and 30 km wide. The beaches are just paradisiacal, with turquoise waters and sand like flour.

The southern part is the most virgin. There, in the towns of fishermen they still live in houses made of stone that mix up with ancient ruins.

The north part is the best-planned, with big very luxurious tourist resorts and huge beaches, although there are more rustic places to stay as an alternative to those who aren’t so pretentious or don’t have a very bulky wallet.

Tourism is the main industry in the island. People from everywhere come here, so when I was knowing the island on my bike, many children said hello to me in different languages, trying to guess my country of origin.

On my way I met those who better know that sea, offering, after their working day, the best specimens. There were the ones who caught smaller fishes but a larger number of them. They say Zanzibar is the species island because there you can eat whatever you want and the food is always fresh: different sorts of fishes, octopus, squid, lobster, prawns, and the list goes on.

Zanzibar has 400,000 inhabitants, most of them are Moslems. But I also met some refugees from different places of the world. As that Nigerian who decided to change the civil conflict of his country for a piece of paradise, and told me about the problem of his leg in such a touching way that convinced me of giving him some dollars for his medicines. Or Jordi, the Spanish diving instructor who guarantees that in the place of the sea where he takes you, you can see everything.

It is just a paradise with many options, as Halima said, a Moslem voluptuous black woman. “If, after several days in the island, you still feel stressed, you should try one of my services“, she told me one evening with a defiant voice.

I wasn’t stressed, but as I was afraid to be in the future, I paid U$S 3 for a 15 minutes session and I just surrendered to her, as she asked.

I wished that time was eternal and her hands never stopped massaging my relaxed body with the coconut oil on that comfortable chair, under a sunshade, just in front of the sea. 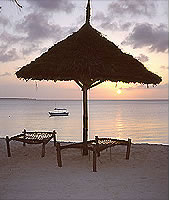 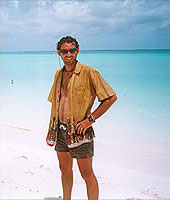 I don’t know if it was the place, the black woman or the massages, but I am sure that that moment is one of my most pleasant memories of this paradise; Zanzibar.