I waked up with a torch pointing at my face and two teenagers telling me: “Money, money!”. I didn’t understand what was happening, one of them shook a machete while he took a stocking off his head, and the other threatened me with something that looked like a sword.

Nairobi was like home in the east of Africa, a city I visited five times and where I spent three months in all. It was also useful to get the visa for the countries I was going to, and to made contacts with some Firms that were my sponsors, later.

I met Daniel, there, a Venezuelan who had been in Kenya for a short time and who welcomed me at his home as if we were lifelong friends. We had been told that Nairobi was a dangerous city, but to us that wasn’t true till that night.

It was Monday, 5:00 AM, and we were sleeping in separated rooms with the doors shut. Suddenly, I felt that someone was shaking me rudely; I thought I was dreaming and I turned on my bed to go on sleeping. 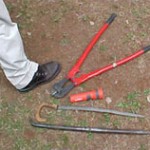 I waked up with a torch pointing at my face and two teenagers telling me: “Money, money!”. I didn’t understand what was happening, one of them shook a machete while he took a stocking off his head, and the other threatened me with something that looked like a sword. “Money, money!”, they repeated.

I sat on the bed and turned on the table lamp. It took me some seconds to react. When I finally understood the situation, I took my money belt and gave them some money I had. “More, more!” they told me, while they slapped my face. They searched the entire room. They took some staff and found my video camera: that video camera my brother had bought some months before, so I could record my travel professionally, with a better quality. I couldn’t believe what was happening to me.

I remembered that in Brazil, they tried to rob me several times, but because of my fate or my luck, I got away. I wondered if that time I would be so lucky. At once I recalled what that Peruvian man, who had been biking for more than five years, trying to get the Guinness record told me: “Some day, you will be robbed, that’s part of the travel, too”.

“Shit, shit!”, I told to myself once and again. “I can’t let them steal my camera, I have to stop them”, I thought.

We were several minutes in my room. I didn’t move. I was sitting on my bed with one of the burglars in front of me, threatening me with the machete, while the other searched the drawers. Then, they took me to Daniel’s room. He had already heard strange noises and was trying to call his neighbor, the owner of the house, with his cell phone, but her phone was off. They were no more than 15 minutes in the house, but I didn’t want them to go away with my camera.

They took everything they could

They searched Daniel’s room and found some dollars; they also took the computer, the DVD and his cell phone. They tried to take the music centre but they couldn’t, they had already taken too many things.

Several times I thought of taking the risk and pouncing on one of them, but I didn’t have the courage. Was it worth risking my life? And Daniel’s? Who had nothing to lose? Them or us? It was several minutes of uncertainty. The spaces in the house were narrow and at the first attack, we would end up in a hospital, at least.

Then, when they had already put everything into one of my backpacks, they told us to stay quiet and not to cause a scandal; it was the first time that Daniel and I were on the same side, opposite to them. Quickly, I went to my room and hid the spray (Red Pepper Defense) I carried with me from the beginning of my travel, but, when I was going to the dining-room, the one with the machete noticed I had picked up something and he confronted me.

Daniel and I locked ourselves in his room and started to shout through the window, desperately: “Call the police, call the police!” .

How they ran away

They left the house through the window, the same way they came into the house. They had cut the grille off and took out the windowpane. I went after them, although I didn’t know for what. I shouted for help. Where was the watchman of the house? Where was the dog?

I caught up with them in the park of our building; when I was close to one of them, I aimed and shot the spray, which has a range of three meters. “Damn! Nothing happened!”. It was fastened. I had bought it more than a year ago and I had never used it. At that moment, the one with that kind of sword tried to attack me, but I ran.

I went to the light of the house, checked the spray and went towards them again before they jumped over the wall. I sprayed one of them, but I had to run again because the one with the backpack threw it furiously to pursue me; it was all a great fuss.  Then I run back once more.

Unfortunately, or maybe luckily, the spray had stayed floating in the air and that damaged me.
Anyhow, I jumped over the wall and met the watchman of the other building, an old man who was very scared and showed me where there was a tap so I could wash my eyes quickly. Then I climbed another wall and jumped to the neighbor residence, I went up to the roof but I didn’t dare to pursue them farther. They ran through the thicket that led to the stream, it was very dark everywhere and I had no idea where we would end..

Following them farther would have been very dangerous. I was barefoot and slightly hurt, but I was lucky: I could have cut myself among so much garbage before I jumped over the first wall.

While I was going after them, Daniel went for help. Our watchman managed to confuse us even more: he told the owner of the house that the neighbor building had been burgled so she didn’t call the police, and he told us, minutes later, that the police had come and they were after them already. Of course, it was a lie.

In the morning, we knew that the watchman reported at his job office saying that everything had been OK and that nothing had happened. I wondered again, can a watchman stay asleep with such a fuss? What happened to the dog that barked every night? Cutting a grille four times doesn’t take just a minute.

That same morning, the police of Kileleshua came, the inspector-in-chief of the D.C.I.O (Division Criminal Investigation Office) of Kilimani, an officer of the Nairobi Fingerprints Department and people from the Criminal Investigation Department of Nairobi worked together in the case. Later, a neighbor brought us the DVD he had found in his garden. Obviously, they couldn’t carry everything.

According to the police, it was an internal job, somebody that knew how to do it. The watchman was in jail for ten days, but then he was freed. I put an ad in the paper offering a reward for the camera, which had been sold for a few dollars, for sure. I also went to the black market where you can buy stolen things and, with the help of a Colombian man, we hired some private policemen to work in the case.

It took me 3 weeks to assimilate this and, although I’m that kind of people that thinks that facts don’t happen at random, I’d like to go back in time to risk myself to my true destiny.