To cycle in Laos allowed me to see the traditional lifestyle of Southeast Asia. People are based on subsistence economy, with different crops, animals and mainly the fishing, which is one of the main basic food sources. But in the north I was really shocked when at a restaurant…

Towards Southeast Asia, on my way to Australia from China I came back to Laos. It had passed more than 8 months since my first visit to this country. This time the climate was pleasant, it was the beginning of the winter and due to the rainy season had ended the sky was clear and the air breathable.

My first stop was Udom Xai where I stayed a week, resting from my journey through Tibet, recovering kilos and forces, and working on the web. Then I began to cycle toward south, through a unique environment.

Laos is the most unpolluted country in the area; it is probably due to the lack of industrialization and its small population. It is estimated that over 50% of the country is covered with virgin tropical forests and that 20% are protection zones declared. Thus, the most time of my tour in this country I had the feeling that I was cycling in the middle of the jungle.

In the most remote areas of the country I met people carrying a bow and arrow or shotgun for hunting. According to people told me when the local people don’t hunt for eating they do influenced on illegal wildlife trade. Therefore it is not uncommon to find a monkey ready to taste in a market inside country. And few minutes are enough to sell it. It is also possibly to find other wild animals in the country like elephants, leopards, tigers, deer and jackals, all of them endangered species.

Cycling in Laos allowed me to see the traditional lifestyle of Southeast Asia. I was told that more than 80% of the population lives in rural areas where most lack electricity and other supplies. People are based on subsistence economy. Their main crops are rice, maize, tapioca, vegetables, fruits and spices. Tobacco and coffee too. Almost every family has some pigs, geese, chickens and buffaloes to work the land. Fishing is one of the main basic food sources, but not only in the waters of the Mekong and other rivers, but also in small ponds, where I witnessed a woman charged a fisherman for the number of fish taken. In half an hour, the man had fished with his net 7 or 8 fishes.

Like in Thailand and other Southeast Asian countries, most of the Laotian professes Theravada Buddhism. According to Ven Charnsak, a monk whom I spoke, “Theravada” literally means “the doctrine or teaching of the ancients”. The Theravada tradition is based on the Pali Canon that all Buddhist scholars recognize. This is the oldest compilation of the teachings of Buddha and according the Theravada tradition it represents the original words and teachings of its master. According to Buddhist belief every man has to be a monk for a short period of his life normally between school time and the time to start a career or marriage. In this way the initiate usually spends since a few months until two years in a temple. In fact a young man is not considered mature until he has completed his “spiritual period”

But during my stay in the country, among the Laotian monks it is also common to find young monks, who sometimes are not older than 10 years. The reason I was explained: “because their parents do not have the purchasing power to support them or just to let children to develop other qualities such as generosity, renunciation, moderation and humility, as well as to raise awareness in all activities”.

During my travels in Laos I met several cyclists, despite the northern mountains the country is one of the most pleasant to ride in Southeast Asia. Because there is very little traffic, people are very friendly and the beauty of the place is unique. The only problem is to find places where to eat. In spite of there is a classic option: “fried rice with chicken” it is not always available. One day I stopped in a mountain village in the north and at the restaurant I found trays with different insects to choose, like larvae, crickets, cockroaches and scorpions. But near of border with China I was really shocked when I saw a woman removing the skin of a rat together a bucket. Due to I could not believe what I was seeing, I came close to look inside it. I could hardly believe it, there were more than ten rats in the bucket. 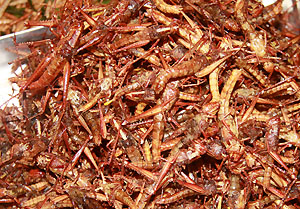 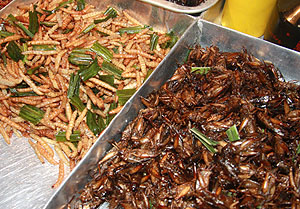 After a brief stop in Luang Prabang and Vang Vieng, I arrived to the capital city, Vientiane. There I was warmly received by Renaud, a French guy 30 years old who is setting his own company since more than two years. “Spirulinea” is a company dedicated to cultivate and export this alga. He is a smart guy and an entrepreneur, because despite all the mishaps and obstacles he got, he is doing it. Fortunately, through Renaud I could introduce my project to the marketing manager of an important Laotian company, requesting a sponsor. But he said to me: “the policy of marketing of the company doesn’t fit to personal projects like yours”. “It was a real diplomatic answer” I thought, which I have heard several times. It would seem that all of them have studied at the same school.

My journey through the rest of the country was easy; the route was mostly flat and I often found guest house to spend the night, when not I camped. The Laotian never bothered me, not even a group of children who hunted bats close to my tent. This way I visited the main cities on the Mekong River like Thakhek, Savannakhet and Pakse. I also visited remote places, like the Kong Lor cave of 7 km long waterways or the Don Daeng Island. And the 4,000 islands, another of the TOP places to visit in Lao that however is full of excited travelers, the place is worth. 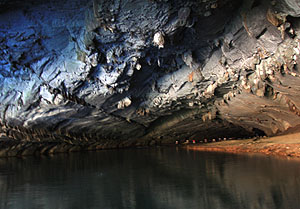 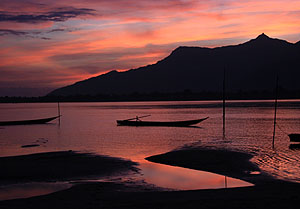 Finally on the way to the Cambodian border I stopped at a restaurant, the place was very poor and it was managed by a woman, the mother of 12 children. “It is common that in the interior families have a dozen of children”, a Laotian guy had told me. While I wait for the food, a girl of no more than 15 or 16 years old serve me water and she sits down next to me. She is curious, but she also flirts with me. Then her mother serves me the food and offers me to take her with me. The girl is shy but she expects an answer. At that moment I feel that she really wants to be carried away by a stranger. But I play dumb and I doesn’t answer, I am quiet and I don’t look her anymore, but she doesn’t take her eyes off me. Then I ask my bill and the woman offers her to me again. So without disappointing the girl I look them and I point me bicycle. And it is enough because they smile and they let me to go.