Cycling Turkey with my girlfriend

The travel in Turkey with Clara was not as simple as when I travelled alone; Now I am not so nice for men and their looks are not more to me. The Turks are good people, but many times I had to impose to them.

I was in Turkey for second time, but it was obvious that this time won’t be the same. After three weeks in Istanbul that will be in one of my best memories, I left with Clara to Yalova, and for that we embarked to cross the Marmara Sea.

Then we cycled to Ankara, and we took three days to do it. The first day we cycled beside the lake of Iznik and that night we camped on its coast. That sunset was very nice. The following day we crossed the Samanli range and then we travelled the other 250 km in route to the capital. The cycled was calm because the weather helped us and there were not big mountains, although in the personal way I angered a couple of times. 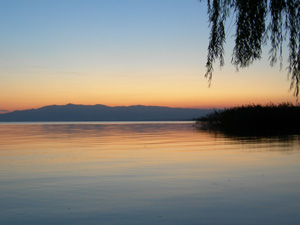 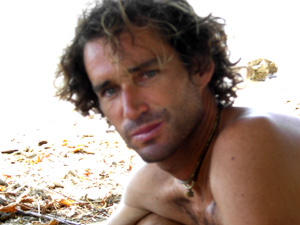 It is obvious that I am not travelling as the beginning, now I am not alone and for the men I am not so nice, and they practically don’t look me more. Now Clara is the real protagonist, but it is not a problem for me. I remember that afternoon when we stopped in a petrol station and we went into the market; at once a short and thin guy came near to Clara without allowing her to advance, as blocked, hypnotized, coveting her. I couldn’t believe it, I was only to a few centimetres behind her and the guy couldn’t see me so at once I separated Clara and in a furious and provocative tone I said to him: “what do you happen man? “ Obviously that he didn’t understand me, but my tone was enough and the guy disappeared.

The other tantrum happened when I knew that the waiter of the bar where we had camped and with whom we had already done a certain friendship went to wait Clara to the door of the bathroom. It happened while I waited for her outside with the bicycles ready to leave. He intercepted her in the corridor and according to Clara in a very infantile way he kissed her three times and hugged her. Clara took off him with a push. “Infantile a shit” I told her, when she just told it me when we left that place, “I am sure that to a Turkish woman he will never do it”. Also that time Clara was clever, because she didn’t tell it me at once because I would have grabbed him by his nape. 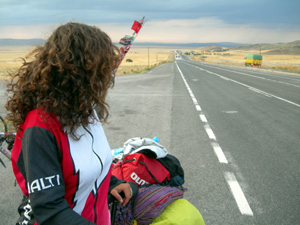 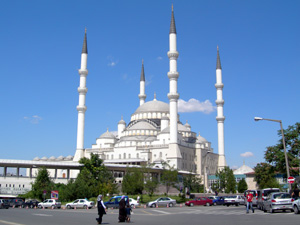 In that way, more furious than tired we arrived in Ankara, where we stopped some days to request the visas to go to Syria. And that bureaucracy we found, we needed two letters recommendation of our embassies to request our visas. But I couldn’t believe that the Italian embassy was more bureaucratic than the Argentinean embassy. They gave us the letter only when they confirmed the authenticity of Clara’s passport some days later.

When we left the capital city we cycled 103 km, and for that we took the whole day; the road was flat but we had some rains and we had to stop several times. On the end of the afternoon we were a little wet and because of the following day was the Clara’s birthday that night we stayed in a hotel. And it was right because it rained the whole night; I believe that Clara could be killed me. The following day we cycled a little and we camped in the riverbanks of the biggest salt lake of Turkey; and that was my present: “that sunset and the wine under the stars in the Tuz Golu. An atypical birthday told me Clara, “it is the first time that I fall asleep to the 23 hs.” 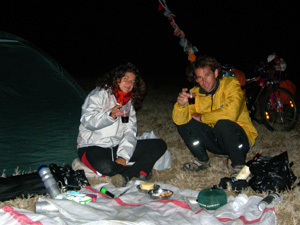 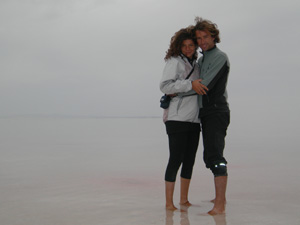 The following day we cycled beside the lake, it was cold and it also rained often, but it was worthwhile because the lake was in all its splendour and during hours we walked there.

Days later we arrived to the Cappadocia and I met again with my friend Enrico, so we stayed in his house, the Mehmet’s house. All of them were very good people. Cappadocia, where I had already been before surprised me again, we visited the open museums, the two big valleys, we went to the great castle of Uchisar and we flew in balloon with Sultan. There I celebrated my birthday, it is the sixth in my trip and the first one that I celebrate in company, and I remember the sweetness of Clara when brought me the cake with the candles. Also for me it was an atypical birthday. 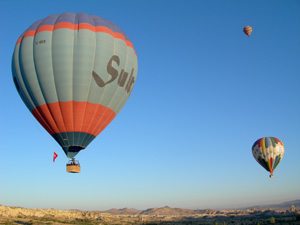 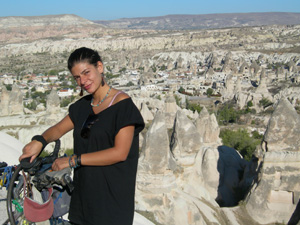 The cycled to the frontier extended for 10 days more about, in those which we had to face up to some dogs without owners; that afternoon we were scare because three dogs brought near to us and one of them had blood in its neck, and it had one of those necklaces with metal thorns, it seemed one of those bad dogs in the cartoons, but it was really.

In route to the frontier, we camped in the mountain and it was very cold; we also camped on the beach and with some families who worked in the cotton plantations inlands, it was amazing!!!! And still on the route Mohamed received us with who celebrate the Ramadan, and that way to serve us food. 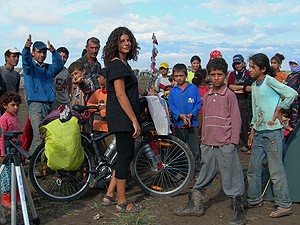 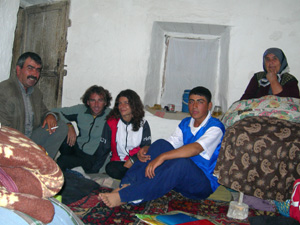 But also I remember Abu, a guy who brought near to the tent when we camped, he was the keeper of the watermelons plantation; and it was after a while that I told him to leave because we wanted to sleep, but I was surprised because in a stupid way he asked me if I was inviting him to enter to the tent with Clara. “That idiot!!! I thought; but it was enough to show him my African knife and to threaten him to understand me what could happen him if he continued to be the idiot, and by this way he ended his cigarette and he left. But later other two guys arrived, they were Abu’s friends and the three sat down with us again and they invited us with a watermelon. At the beginning they seemed nice, but then I didn’t like how they looked at Clara and I had to cause to one of them for understanding that I didn’t like him, maybe I was with some fear, but it worked because they left at once.

The Turks are good people, but many times are so nuisance especially if one travels with a woman; it happened that I left Clara for few minutes alone and at once men gathered like bees. I believe that in this part of the trip I will explode or perhaps I will learn to be more patience. I remember in Istanbul that shoemaker who takes Clara by her foot, or to the people who caressed her in the street, only for getting any contact with her; or that photographer that he only stopped to photograph Clara when I interposed between his camera and Clara and I also remember the another guy who took advantage when I move away from Clara to touch her leg to check her muscles.

But what I can do? I can not grab all of them by the nape.