For two weeks Fernando and I rode much of the country. We pedaled from Santo Domingo to Punta Cana, the tourist center of excellence for its endless white beaches and its optimal hotel infrastructure. But inland we visited populations that showed us a harsh reality.

It is Sunday, and we’re on our way to the border with Haiti, through a remote area of ​​the interior of Dominican Republic. It is the province of Santiago Rodriguez, small towns, where there are very few things to do. The way is mountainous and semi-desert vegetation no tourism except us, headed to Dajabón. By midmorning, with few kilometers traveled, we are witnessing a popular event. We do not know it, so we stoped and I went to investigate, while Fernando is taking care of the bicycles. The whole town seems to be there. They are like one hundred and fifty people, mostly men who are gathered under a ranch, screaming and challenging. 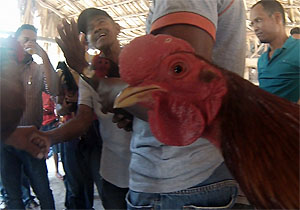 As I approached I noticed that almost everyone has a rooster in his arms, caressing first and then putting it in a bag to weigh it. Then comes the time to fix fights. The roosters are measured on the ground, facing each other. More than one shows fear and want to escape. But their owners do not allow him, and seek for another opponent. In another sector it is who is responsible for placing razors in the cock feet so they can hurt his opponent easily. “Juices, empanadas” scream someone near the dice table. The whole place is a casino. The cockpit opens. I’m excited, it’s the first time I find myself in a cockfight. As we were tourists we get in for free, the ticket costs the price of a lunch. The place is full, gambling, “I play the  money I made in week,” tells me someone next to me.

The roosters are placed in the sand, they are measured again and the battle begins. Shouts and nervousness of the owners of the roosters, and the gamblers. The kids and grandparents are also part of this intoxication. Fights last 12 minutes, or until one of the roosters die, told me someone. The roosters peck, push, take momentum with its wings and strike with his legs. 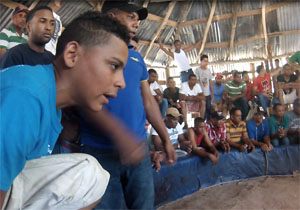 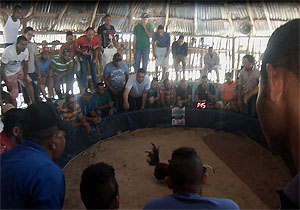 The third fight I saw, had an unexpected end, the best Rocky style: after several minutes the fight was bloody, increased the bets by the despair of the owners of the roosters. The cock who lost more blood retreated, it was a sure end, his opponent did not give him respite. But when nobody expected the rooster believed the winner got strucked by the sting of his rival and dies on the spot. A boy 15 years old, the owner of the winning rooster, celebrates in a euphoric way: entering the arena and start jumping, shouting, snatching his arms as if he were boxing. Also they celebrating a euphoric way his friends and spectators who won their bets.

As I explained a figthcock is ripe to fight after a year and a half old when it lived 3 times more than poultry roosterlive, which is aimed at human consumption. If he survives the fight, the cock is recovered in two weeks and then would return to the arena; if it dont fight could live up to 10 years. This is not different what happens with the bulls in countries where bullfighting take place.

We arrived in Dominican Republic after 12 hours of ferry from San Juan de Puerto Rico. Through a friend from school, I contacted John, a civil engineer who after living 10 years in Spain, returned home to practice with his friend faculty, Carlos, also an engineer, but industrial. Juan received us in his house for several days, where we lay out our tour of the country and Carlos managed us some contacts to receive us on the border with Haiti. And it will force my destiny that brought me here just as both were launching Raassolar, a company that develops solar energy projects. After a couple of lectures, Carlos decided to sponsor me during my time in the island, just because of wanting to be part of this project, “because it does not pollute and that moves with clean energy, such as human powered,” he said.

For two weeks Fernando and I rode much of the country. We pedaled from Santo Domingo to Punta Cana, the tourist center of excellence for its endless white beaches and its optimal hotel infrastructure. Isolated from the local scene, this region points to a more purchasing power customers but has the Bavaro Hostel, an alternative location for independent travelers. Its owner Gill, knowing about my trip, gave us a small apartment in the hostel as a courtesy for a couple of days, where we could relax and explore the area.

Following towards the northwest we reach Sabana de la Mar, where a ferry transported us to Samana. Normally the trip takes a little over an hour, but in our case it took four, because the boat was overloaded and halfway the engine stopped working. Being stranded in the middle of the sea is not a pleasant experience, especially if it moves like a rocking chair and with seasick people. It was the fifth time in the Caribbean Sea that I went bad and where I  sometimes wish never have come.

Towards Haiti, the journey continued to the west, we passed the Terrenas, Cabarete, Puerto Plata, Santiago Rodriguez and Dajabon. We met kms of beaches with good hotels and a turquoise sea, but also inland populations that showed us a harsh reality.

As Mark explained to me, a Dominican guy to whom I talked for a while, the great migration of people from Haiti to the Dominican Republic is one of the main problems of the country and therefore there is a certain rejection of the Haitians, because they are related to extreme poverty, violence and unemployment.

During my time in the city of Moca, the death of a young student supposedly by hands of Haitians drew the anger of Dominicans, dislodging  by force, with sticks and machetes, hundreds of Haitians living in the city .

“As our closest neighbors in the Caribbean, the Dominican is a mixture of colonial cultures, African slaves and native Indians, although the latter were exterminated in large part,” Marcos told me. “This composition has created a self-conscious society, an ill-defined identity. Dominicans consider ourselves generally descendants of Spaniards and we believe the myth of the superiority of the white race while rejecting ties with Haiti, despising our African culture we see with intellectual inferiority. Unfortunately racism is a wound that has not healed in our country.

Back to Santo Domingo, before leaving for Cuba, I witnessed how a young man from a car, for no reason, threw a punch at another young man who was walking. The guy who was next to me, who also saw the scene,  said, “this was because he is black or Haitian which is the same.

“Besides the Dominicans and Argentineans who welcomed us with open arms at home, I want to thank Rafael (planetbike.com) for putting in good shape my bicycle.