Undoubtedly it is not the places I passed what remains in my memory, but the human warmth which paradoxically hides in the people of this country, where winters reach 30 or even 40 degrees below zero.

Escaping from the Mexican rain, and with great curiosity to get to know this side of North America I decided –in the middle of summer- to take a plane to Toronto, so that I could reach the depths of the most populated part of these countries called “the first world”.

Canada is the second largest country in the world; it is as big as the European continent, although it barely has half of France’s population. The country is rich in natural resources: raw materials, minerals, food, and it has a high gross domestic product, higher than most western European nations. Canada is one of the countries with highest life standards, although not everyone enjoys this privilege.

Arriving in Toronto, David hosted me. He is a Chilean who was able to apply for a work visa in Canada thanks to being under 30 and a university graduate. He graduated as a veterinary, but in order to work in his field he has to level his studies with the sanitary knowledge of this country.

About that, he said: “I should take three theoretical and practical exams, one of which is national and another one North American. These exams are very expensive and take around two to three years to take, as they only put out calls for them once or twice a year. Veterinarians, doctors, dentists, nurses or kinesiologists need university levelling. But not only health care professionals; also engineers and accountants, for example, should go through this. And it is not cheap nor easy for someone who comes like me, to try his luck. And so most professional immigrants who are in Canada end up taking any job. In the two years I’ve been in this country I have worked in carpentry, then basement re-building and currently in cleaning. In the meantime, I continue to look for a job more related to my background.”

Toronto is the biggest city in Canada, the one with the most ethnical diversity; the favorite city for the immigrants who arrive and don’t speak French. According to unofficial statistics, half of Toronto’s population was born abroad, and so the different neighbourhoods capture the essence of their cultural diversity: Little India, Little Portugal, Greek town, Chinatown, Koreatown and Corso Italia are some of them.

Throughout the five weeks that I was in East Canada I pedalled 1500 kilometers and I visited Ottawa, Montreal and Quebec City. In those cities I stopped to sell my documentary on the street during weekends. In the busiest places I would open my banner next to the bicycle, and some curious people would approach to chat. But in North America, he who doesn’t pay a fee cannot make money on the street; for everything there is a permit, which in the majority of cases it takes weeks to get. Telling my story to officials in Toronto was no good; no exceptions. However, on the French side everything is more relaxed, and the only official who approached me in Quebec City ended up buying a documentary from me. Still, on the English and the French sides I sold a lot. Canadians have contributed to me continuing my trip for at least three more months. 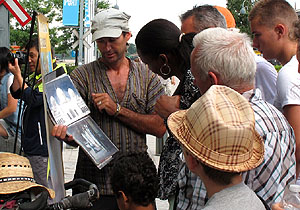 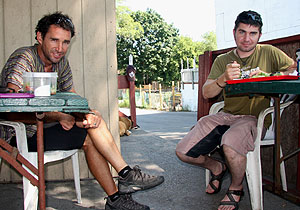 In my case, it would be impossible for me to gather any money in these “first world” countries if it weren’t for the good will and hospitality of their people, whom I have contacted through warmshowers.org or courchsurfing.org. In both sites the majority of its members have a passion for traveling, are bohemians or turn out to be great travelers, such as Patrick, who hosted me in Toronto after concluding his bicycle trip of 9000 km in less than 3 months crossing Canada; or Phillipe, who hosted me in Montreal after working in cruises for 15 years. He threw a big welcome party for my arrival.

In Ottawa I was hosted by Monica, a Mexican woman consolidated in her work and salsa dancing fan, who even gave me some dancing lessons. I also have to thank Jean, a Canadian geologist who hosted me in Quebec City. Jean was a different kind of guy, as he had turned his yard into practically a jungle, when it is very common that Canadians will keep their yard as a golf course.

Donna and Andy, from the small town Jasper, Ontario, rescued me from the Street under a torrential rain. I cannot forget Dean: he hosted me for a couple of days in Toronto. He used to be a bicycle mechanic who toured Africa helping the Tour d’Afrique cyclists; this was a tour agency that organized continental bike expeditions. Dean got me all the parts I needed at cost and traveled from Toronto to Montreal to put them on my bike. He had gotten the parts through Nick. Nick was the man in charge of Cycles Lambert, the Canadian leader in bicycle product imports. This man never even met me, but decided to support my trip. I’m not treated this well in my own country, even.

Whenever I couldn’t find someone to host me, as there aren’t always available people, I just set up my tent at sunset in a park or field, without being noticed. Experience told me that it is better not to ask for permission, at least in these countries of able people, where most of the time they don’t view me as a traveler, but as a vagabond.

It has happened to me in Europe, Australia, New Zealand and North America; whenever I asked a farmer to set up my tent in their land, I’d get childish excuses to go elsewhere. But in an Asian, African or Latin country, it is rare to be denied. However, it is better to ask for permission there, because in a Latin American country they could repel you with gunshots.

While I crossed Montreal I witnessed one of their big events “White Yoga Lole”, which happens in many places of the world yearly. It is outdoors, free, and it gathers thousands of women dressed in white. In the Olympic stadium of Montreal I chatted with one of the organizers, who spoke serenely, irradiating calm. Regarding yoga he said: “styles and tendencies aside, it is important to remember that yoga is a traditional discipline that comes from India, which seeks balance and also physical, mental and spiritual wellness, to promote enriching beings as a whole. Yoga is, essentially, a tool to understand existential suffering –typical of all beings- and to help us to come out of that suffering, setting it aside from the daily life circumstances. It is a discipline that links us to the innate capacity of being, in happiness, calm, clarity and energy”. 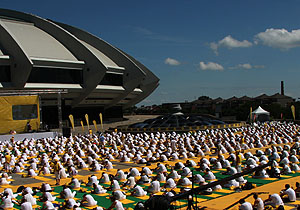 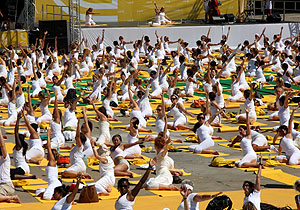 Biking through East Canada was easy. Almost always the routes spread through flat surfaces and there are bike lanes all over the place. But undoubtedly it is not the places I passed what remains in my memory, but the human warmth which paradoxically hides in the people of this country, where winters reach 30 or even 40 degrees below zero.