Round the world trip by bike came to the end

Finally after 167.510 km I completed the round the world by bike journey. Here I tell you one of the saddest episodes I lived in the last stretch of the tour of my country, and how EXCITING was the day of my arrival. And of course, I also tell you about my new projects after 16 years of travel.

During the next 6 months I cycled the rest of the country. From Bariloche to Formosa and from there to Buenos Aires, through Paraguay and Foz de Iguazu. I could not end a 16-year long journey around the world without knowing Argentina in depth.

That is why I visited its 23 provinces and in them I was received by more than 50 families. It’s impossible to mention each and everyone of the family members, friends and acquaintances that gave me a place to stay in the kindest way. Something surprising happened to me in Misiones, when a guy who knew me from the Internet contacted me to make a TV interview and offered me to stay at his house. But, after the first night he asked me to leave because I was not humble – I was a stuck-up from Buenos Aires and I had bad vibes.
I tried to talk with him about it, but the guy did not want to. So I packed all my things and left as fast as I could, very saddened. In all of these years of travel I was sheltered by more than 1,000 families and nobody ever told me anything similar. I felt like a dog, and I think that all of this was because I was not interested in being interviewed by other TV and radio programs in his city. I only agreed on appearing in his show.

Please know, my friends, that in this past year I was interviewed in more than 70 occasions in Argentina, and to be honest I do not feel like going to every interview I’m invited. It’s not that I mean to be derogatory with inland people – it’s a matter of math. I’d rather be interviewed by the national or provincial press, which reach more people. Not everybody understands what a bike traveler needs. I’m outraged by the people who judges you for the city in which you were born.

But what outrages me the most of this Argentina is the gap that politic ideology left in most of its population. I knew this – we Argentinians talk about football, politics and economics as if we were experts on the subject. What I wasn’t aware of is how society divided itself into two irreconcilable sides: Kirchnerists and Antikirchnerists – that is those in favor or against the last government’s politics, which lasted three 4 year periods. What shocked me was seeing the gap separated life long friends, coworkers and even families.

Arrival in Buenos Aires, the end of the journey

Finally, I cycled from Misiones to Buenos Aires I contacted various cycling groups from the city for my arrival for them to join me on the 29th of December in my last kilometers from Tigre to the Obelisco. Fernando, a childhood friend that had already cycled with me in Antilles and Bolivia handled the logistics. He spoke with the Sustainable Mobility Secretariat, and he managed to get the city Transport Department’s escort in order to help the bikers cycle through the city. Also, he spoke with the La Boca Firefighters so they would also escort us the last kilometer in 9 de Julio Avenue. 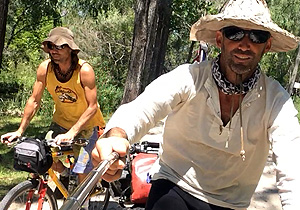 When I was in Entre Rios, my brother joined me from Spain to cycle the last 300 km to Buenos Aires with me. Also, I was received by friends that travelled from Buenos Aires. The big surprise was the presence of Giovanni that came from Brazil, and my girl was also there, of course. She came from Brazil too. Ricardo came from Pehuajó with his bike and cycled the last km to the Obelisco with me. The day of my arrival I also found people I met in South Korea, Finland, Italy, Malaysia, Ushuaia, Córdoba and La Pampa.

That definitely an EXCITING DAY. I woke up nervous, and with a weird sensation in my stomach. It was early, so I went to the terrace. It was not raining still, so as every single morning, I made my breathing Exercises and I chanted the Hare Krishna mantra. The same mantra that I took with me the 167.510 km. Even I didn’t believe I would be able to come this far.  It’s incredible. My only previous experience on a bike was cycling just 200 km in two days. Imagine, then, how I felt when that morning we arrived at the 9 de Julio Avenue accompanied by other 60 bikers, a fire truck and a City Transit Department vehicle.

Currently I am writing a book and organizing bike tour in Patagonia. You are welcome.

This blog entry was translated by Antonio Miloro. You can contact him for translations at tr.miloro@gmail.com