The coldest day of my life

When I arrived to the pass it was the end of the afternoon and I had my frozen hands. And my foot were worse than my hands. It was dangerous. Going down I thought that I could lose the control of my bicycle, and I didn’t stop of praying.

From Santiuste I returned to Segovia, and from there, in spite of it was half afternoon I faced up the mountain of Guadarrama to the pass of Navacerrada, of 1860 meters of altitude. And it was a madness; that day ended being the coldest day in my life. 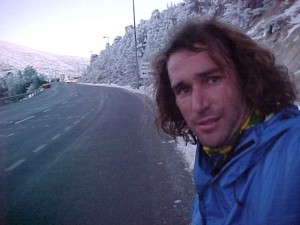 When I arrived to the pass it was the final of the afternoon and at that moment I didn’t wear my gloves because they were humid for the rain and the perspiration of the previous days, so I had my frozen hands. And my foot were worse than my hands. Such was the cold that when I opened my thermal bottle I noticed a layer of ice in the water; it was incredible. Without time to lose I sheltered other little, dressing a jacket, a wool cap and the humid gloves. And taking advantage of the last daylight I decided to cycle the 20 remaining km to arrive to Collado Mediano, where I would sleep in the Mariano’s house, a friend.

But that hard it was. I cycled down to a speed of 40km/h, the brakes of my bike were very worn-out and I pressed them for instinct because the wind and the cold made me lose the sensibility of my hands and also that of my foot. At that moment I knew that I could lose the control of my bicycle, and I didn’t stop of praying.

When I arrived at the first town, I stopped because I had missed the road. Shit!!!

I remember when I could not take off the gloves with my hands, I had to make it with my teethes, and I took a long time to open one of the bags to take the map, my hands were frozen.

Then I began to jump and to move the body, I ran as a lunatic, from a side to other, up to a man appeared and he indicated me the road. He had to explain me it three times, because I didn’t understand him, I was trembling and I couldn’t to coordinate my senses. The man was astonished and he told me: “you are a crazy guy, but you have to have some terrible genitals, to cross that pass and at this time with the temperature below zero”

And I didn’t have doubts; I am a damned lunatic I thought. 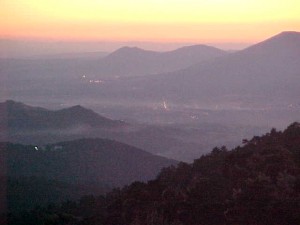 Without time to lose I took the bike and I continued down hill, heading to Collado Mediano. But on the way I found a petrol station, where I stopped and I drank three hot chocolates. The employer who saw me with my bicycle and noticed certain difficulty in my speech he assisted me immediately. After some minutes, I improved a little and I could continue other more 15 minutes.

Finally I arrived to Collado Mediano thanking to God. I had never passed so much cold. It had been the coldest day in my life. And for the first time in my life I felt how the cold can kill somebody.

I arrived in Madrid on 23 December of 2004, to celebrate the Christmas with my family. I also met to Oli, a friend who I didn’t see from 5 years ago.

And I toast for them, and for another year of trip, but with less rains and less cold.