After the European winter, where I worked a lot for the website, I traced the route to continue my trip and after saying goodbye to my family in Madrid I started my cycle to Andalusia where I stayed 3 months 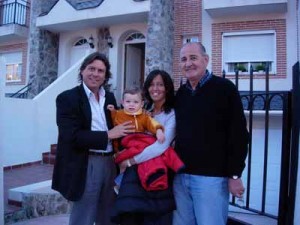 After the European winter, where I worked a lot for the website as well as in the creation of a photos projection, I traced the route to continue my trip and after saying goodbye to my family in Madrid I started my cycle to Andalusia.

It was the beginning of the spring and the time was not still good. I remember when the first night into my tent, I couldn’t sleep, it was too cold.

And what difficult is in this country, to find a comfortable place to put the tent. The floor in Spain is very rocky, and always under my sleeping bag there is a great rock which incrusts in my back.

In route to Seville I visited Cordoba, a city that is proud of its old mosque that represented the power of the Islam when the Iberian Peninsula was almost in its whole under the Arabic domain in the century VIII. But today the old mosque shelters different architectural styles, result of the end of the Muslim age and the Reconquest of the Catholic kings from Spain.

When I arrived in Seville, the fair of April was celebrated. A mega event that gathers during 6 days to the whole population of the city, to dance, to eat and to drink. 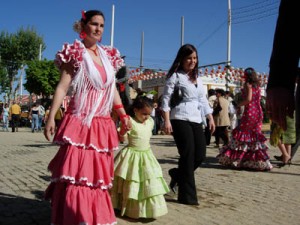 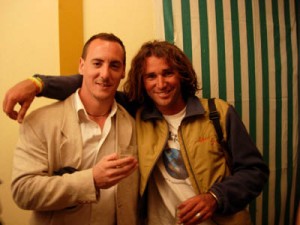 The interesting thing was to appreciate as the whole city unit in the rejoicing of a great party where the sevillana music and their clothes are the main protagonist. But really I was not very happy, I never sold so little with so much people surrounding, but I enjoyed it too, because I met a lot of characters and mainly because I received my great friend’s visit Oli. 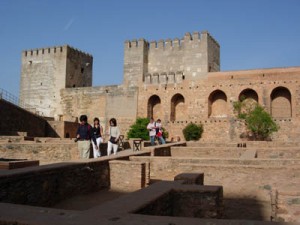 My trip through Andalusia continued toward Granada, the last Arab place which was the capital of the Muslim Kingdom during 250 years. The Alhambra was the most important legacy in its Kingdom, a majestic and detailed worked complex. Today is the main attractiveness of the city and although it seems lie it is visited by thousands of people per day. And I could to feel it on my sales.

In Granada I met Esther, a tourist guide who knew all the secrets of the city. I visited with her the old town, the Albaicin and the gypsy neighbourhood or “Sacromonte” where in its hillsides several caves exist and where formerly the gypsies of the city lived. But without a doubt that more I liked it was to see a flamenco show. According to Esther the flamenco more than a dance is an artistic expression of the happiness and of the hardships of the life. There is not a strict choreography; the dancers improvise their movements to the rhythm of the guitar and of the feeling. 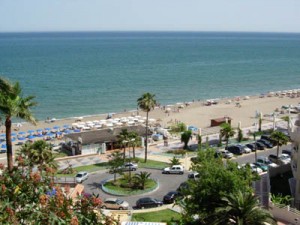 My road in the south of Spain continued toward the Sun Coast; I crossed Malaga, Torremolinos, Benalmadena and Fuengirola. All tourist destinations that are invaded by Englishmen and German in this time of the year.

There I was several nights sleeping on their beaches, the climate was good and the places were very calm. I also visited Marbella the most exclusive complex in the Sun Coast where I met a friend and his group from Mar del Plata, Argentina

And in Marbella I was lucky, because I got from the Sports Delegation a permission per 4 days to sell my pictures and my dolls in the street and I sold very well.

In Banus Port, I tried to get permission too, but in its city hall they didn’t be so nice. So I continued my trip toward Estepona, where Carlos received me, an Argentinean guy who knew about my trip through internet, he offered me his bed while he slept in the settee.

Then I visited Gibraltar, but I didn’t like it because geographically it is part of Spain, but politically it belongs to the Englishmen. Travelling through Spain always I felt myself like at home, but when I entered to Gibraltar I had to show my Spanish passport, I should always speak English and above I had to pay in pounds. 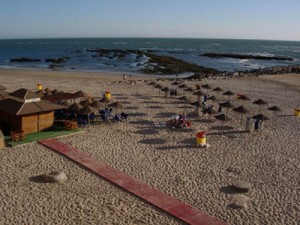 Continuing by the coast I visited Tarifa and then Cadiz, it is one of the most beautiful cities that I saw in Spain, and what nice beaches!!! There I met Mustafa, a Moroccan guy who paints caricature. I knew him in the fair of April in Seville some months ago.

And like my road continued toward Portugal, the route carried me again to Seville; my journey for the world is never a straight line. And this time Seville caught me. At once to my entrance I crossed with Pablo, a fanatic of the bicycle, architect and climber, still rebellious and with many dreams, who didn’t doubt to receive me in his house.

Taking advantage of Pablo’s house I left the bike there, and I travelled to Ibiza to visit my brother; this time Ale helped me with a photos projection. And why not a little of “Circo Loco”, and that nice, there I also met to Diego.

Finally I returned to Seville for third time, and then a fourth, when from Portugal I went to Morocco. 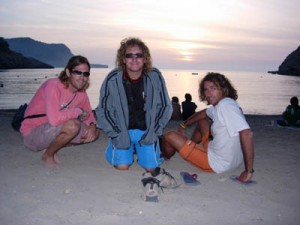 And I should admit that the Andalusia city was the place where I desired to stay a time, it was as my house in the south of Spain, where I make friends and something more, for this reason Seville with its people and its idiosyncrasy were recorded forever.