The history of Buddha

Bodhgaya is the most important among the four holy cities of Buddhism since it is the place where Siddhartha Gautama reached the Illumination becoming Buddha. Thereby to arrive here was moving.

From Nepal I came back to India and because I didn’t get a new visa in the Indian Consulate from Kathmandu, I began my cycle to Calcutta with my days counted. The objective was a true challenge, to cycle almost 1.000 km in less than three weeks, but also to include the visit to Bodhgaya and Mayapur, two of the most sacred places in the whole country.

The first destination was Varanasi where I had been before with my brother and Clara, so this time I just stopped a couple of days to make some videos and pictures. Then after two long days of cycling I crossed the 250 km to arrive to Bodhgaya, the most important in the four holy cities of Buddhism since it is the place where Siddhartha Gautama reached the Illumination becoming Buddha. 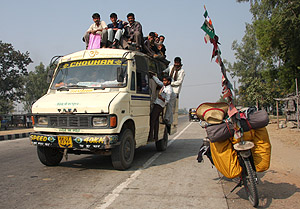 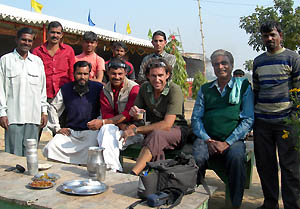 It is said that in the V century B.C. when the prince Siddhartha was born there was such a splendour in the atmosphere that Asita, a religious sage of great reputation noticed it from his meditation place in the Himalaya heights and he decided to go down and to visit the newly born one. The wise Brahman prophesied that Siddhartha would become a great king or a Buddha; what anguished his father who wanted that his son, the heir to the Sakya reign be a great military hero, conqueror of lands and administrator of empires. Thereby his father protected him of the hardness of life outside the palace; and to avoid that his son develops his tendency toward the spiritual he created a life full of pleasures around him and without any real contact with the suffering of the reality. So, between luxuries and comforts Siddhartha received the best education and formation.

But Siddhartha started to feel curiosity to know how the things were in the external world and he requested permission to his father to satisfy his desire. The king consented and the prince reached to leave the palace in four occasions. But in spite of a strict control so that the streets were clean of any vision that could break the prince’s conscience, Siddhartha saw in each one of them what he had never seen until then: an old man, a sick person and a procession and thereby for the first time he reflected about the old age, the illness and the death. In his fourth walk he discovered a monk covered with a tunic who seemed to emanate peace of his face, thus he also decided to live a life of renunciation searching for the absolute truth. Siddhartha left his house, his wife and his son, giving up everything and on his 29 years old began the search of illumination.

According to the Buddhism in that time the world was much richer in philosophical and spiritual sense, and it is believed that the society had a deep interest for the fundamental questions of the existence and thereby, there were a great number of meditation teachers, the philosophy schools and the religious debates. This didn’t happen only in India but in Greece, China, Persia and Middle East. This same thought line was known as the Axial Age. It was in this time and during six years that Siddhartha was meditating and learning from the most famous teachers in the north of India, with an admirable determination to find the illumination.

And it was here, in Bodhgaya, under a fig tree that Siddhartha Gautama became Buddha, being illuminated. Since then, the town became a pilgrimage place for the Buddhists from all over the world. In the place of the illumination the Mahabodhi Temple exists, one of the biggest Buddhist temples, which has been founded around 250 BC by Asoka, the Indian emperor and Buddhist devote. But the temple was destroyed and abandoned after the Hunas and Islamic invasions, but reconstructed in the XIX century. Since then other Buddhist temples have been built in the city by monks coming from Japan, China, Bhutan, Tibet, Nepal, Burma, Sri Lanka, Thailand and Sikkim, which are representative of the Buddhist cultures and traditions of their countries with their respective architecture. 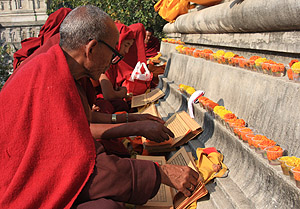 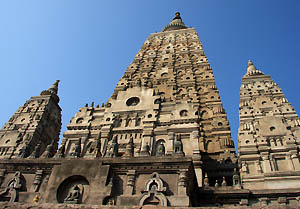 Thereby to arrive here was moving. When I visited the Mahabodhi Temple I met with hundreds of monks and faithful who made their prostrations towards the place of the illumination. According to an English pilgrim explained to me the Buddhism teaches that anyone has the innate potential to reach to experience the awakening and the nirvana; but the way implies enormous sacrifice and it usually begins with a provocative and disturbing “doubt”.

The first Sutra (teaching) given by Buddha was to his old meditation partners, and it is known as: “Turning the wheel of Dharma”. In this first teaching, Buddha established the bases for the understanding of reality of suffering and its ceasing, what is known as “The Four Noble Truths”. “Life means suffering”, “The origin of suffering is attachment”, “The cessation of suffering is attainable” and “The path to the cessation of suffering”. This path is known as the “Noble Eightfold Path” which is based on: “Right View” (it is referred to the understanding of the Four Noble Truths), “Right Intention” (which consists in focusing our willpower correctly to change), “Right Speech ” (not to speak in excess or useless, not to lie), “Right Action” (not to kill, to steal, to hurt or to violate), “Right livelihood” (to earn the livelihood with a decent job without affecting to the others), “Right effort” (to prevent and to destroy the insane thing and to produce and to cultivate the healthy thing), “Right Mindfulness” (it is referred to an attentive and aware look to maintain the mind at the present, distant of the desire and of the mundane resentment) and lastly “Right Concentration” (to meditate with application and good aspiration to reach the levels of absorption of the meditative state well-known as Jhanas).

According to Peter explain to me in west countries it is very common that Buddha Gautama is considered like a God. But a Buddha is not a God, neither a messiah, nor a prophet. The Buddhism is a religion no-theistic. In general, the Buddhists neither think nor speculate on the existence or not of God or a Supreme Creator. The Buddhism doesn’t require of this resource to explain how to reach the illumination. Buddha is considered like the guide and the teacher who points the way out to reach the nirvana; he is not a deity which people have to adore. The Buddha is only an example for those people who should walk the path by themselves and to achieve the spiritual awakening. The philosophy and meditative practice of the Buddhist system were not a divine revelation, but rather the understanding of the true nature of the mind and such an understanding can be discovered by anyone.

Siddhartha Gautama died when he was 80 years old. The cause was an alimentary intoxication which produced him haemorrhages and strong pains that, according to the testimonies, he put up with great integrity. Finally, he lay down in a mango forest in Kusinagara, surrounded of their pupils where he reached the “Para nirvana”.

At the present time it is believed that the number of Buddhists in the world overcomes the 300 million people, making of this the fourth religion of the world. In Asia it is the “great philosophy” because its practice has been able to expand to the entirety of its countries.

During my stay in Bodhgaya I visited different temple like the Bhutanese, the Thai, the Japanese and the Tibetan one; also the big statue of Buddha, high 25 mt, the monument which was inaugurated by the Dalai Lama in 1989. It is amazing.

I found Bodhgaya one of the most spiritual places which I have already visited in the whole trip, it is not a city, but a true Buddhist centre surrounded of fields and small towns where monks and pilgrims of everywhere go to study, to meditate or just to mix with the atmosphere of this holy place.

Definitely Bodhgaya is a place to visit, to return and to do not forget.