The other face of the Gulf

During my stay through the Persian Gulf there is something that really surprised me, and it is the mistreatment to the Asian immigrants, who are fifteen million people, what according someone explained me, it means more than half of the population of the area. 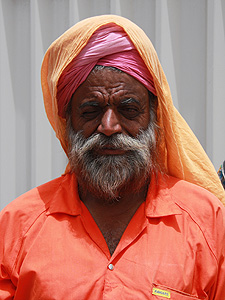 During my stay through the Persian Gulf there is something that really surprised me, and it is the mistreatment to the Asian immigrants, who are fifteen million people, what according someone explained me, it means more than half of the population of the area.

The fast development of the economies of the oil rich countries from the Gulf (Saudi Arabia, Bahrain, United Arab Emirates, Kuwait and Qatar) has caused in the last decades a migratory phenomenon of great magnitude. The strong manpower ´s demand favored the immigration of workers coming from India, Pakistan, Bangladesh and Philippines, among other countries of Asia who work in the construction, as domestic employees, taxi drivers or in any other type of service; but because there is no a legal system which protects the workers of abuses, the immigration became a business; a real mafia.

The immigration system demands a sponsor to obtain a visa. This working permission becomes property of the boss who appropriates even of the employee’s passport, so if the worker wants to give up his job and to look for another one or to leave the country, he can not do it; because he doesn’t have the money and neither the air ticket which he will get on the end of the contract. This way, the employee is forced to complete his work during the period of the realization of the project. What’s more, the recruiting agencies from the origin country get cash from the workers who stay strongly indebted. I remember the history of Rajan, who every time that he saw me with my laptop on, he asked me to call his family. He told me, that in India the recruiting agency had promised him a superior salary to the 200 u$s, (for it he had paid 2000 u$s to be hired) but that since his arrival he didn’t even earn the half. Rajan didn’t see his family since 5 years. But he was happy, because after few months he was going back to India; he was excited and convinced that he would not return to the Gulf.

Stories like this, there are thousands Tony told me, a Lebanese friend who to hire a domestic employee had to pay to an agency in Kuwait 5.000 u$s, to bring him a girl direct from Philippines. “Here I didn’t find her and I needed one urgent” he told me. Then Tony told me that he hired her for 5 years with a salary of 150 u$s.

When I was in Dubai I knew about a case of a domestic employee from Eritrea who was accused of robbery to have entered to the room of the family where she worked, to grab her passport because they didn’t want to give it her. The woman, that was acquitted but that had the risk of going to the jail, defended herself on trial saying: “I am not a thief; I only grabbed what belong me because I want to return to my country”. According friends explained to me they are many cases of women who have escaped from their bosses for mistreatments, unpaid, verbal and physical abuses, or rape. In Bahrain many Asian immigrants had committed suicide jumping from the bridge which separates the island from Saudi Arabia.

It is not difficult to notice the mistreatment to the Asian immigrants or the feeling of superiority from the local people. During my whole trip through the gulf, several times I have seen like the local people of each country arrive to a shop and without getting off from their cars with air condition they begin to play horn, to be assisted. Some of them seem uncivilized, rude. Anyone would think they are kings, it doesn’t matter if they bother or not they play horn till the employee of the business, (always an Asian) goes to assist them. The order can be cigarettes, something to drink or any other thing. Then, the very submissive employee goes for it and takes it to them. “Tip?” I asked to one, “they don’t even say thanks” he answered me, laughing.

“The law always support them and the embassies cannot help too much”, Carlos told me, a Latin friend who lives since more than one year in Dubai; he also told me about his friend, Peter, an English guy who worked in the American hospital. One day while Peter drove he was shut up by a car in an abrupt manoeuvre, that’s why he cursed the driver making him a “fuck you” raising his middle finger. Few days later the English guy was stopped by the police, dismissed from his work, sentenced to stay some time in prison and after the condemnation deported to his country.

But what I found difficult to believe it was when in the United Arab Emirates a friend showed me a video in youtube about the Sheikh Issa, the president’s brother of the country in which he tortures an Afghan. In the video the Sheikh Issa shoots to the Afghan to his feet, making him dance; then with a plank with salient nails hits him in his bottom and later he puts him a stick in his anus; lastly the Sheikh Issa passed over him with his Mercedes.

I stayed in the gulf for 6 months and it was enough to understand that no matter how much they make an attempt on “human rights” because for these latitudes nobody will invade.

In the last days I also knew the Mohammed story that contrary to the others, it was really satisfying.  Mohammed is an immigrant taxi driver from Bangladesh who is working since almost 15 years in the gulf. “Here the life for the immigrant is very hard” he told me, “my first 9 years I lived in Saudi, but newly at the third or fourth year I began to save some money, between 100 and 200 u$s per month. Sometimes a little more. Then I moved to Dubai, where I am since the last 6 years, but only 3 working as taxi driver. We are more than 7000 taxi drivers in the country, everybody from India, Pakistan or Bangladesh. The company gives us lodging that they are blocks of rooms; we are 4 people in each one of them, with one common bathroom for each floor, 10 showers and 10 sanitarians each 200 people; and a small kitchen also exists where we can hardly make tea. But it is a good work, we work 12 hours per day, every day and we earn 35% of what we bill. This way when things go well my salary is around 1200 u$s and I can save 500 u$s, the rest is for my expenses here and to send to my family. So, in few months more I will have the money saved to give up my job and to put my own auto parts business in Bangladesh”. “How much do you need?” I asked him, “60.000 u$s” he told me.

It was clear that the biggest joy in Mohammed was to go back home and with his fulfilled wish.