It was very beautiful to walk along the rambla, the most famous avenue of Barcelona. And for me it was like a museum of characters that, with their originality, amuse tourists and curious people. 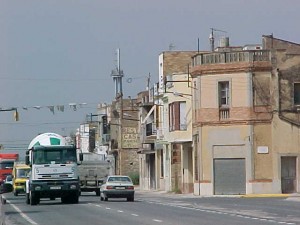 My physical condition, after my night tours round Ibiza, wasn’t so good; I had to purify myself, and as if that weren’t enough the way to Barcelona was a little hard: I had to bike facing the wind.

The first night was the hardest. While I was sleeping in my tent in a petrol station, a strong storm began and, at 1: 00 am, I had to disassemble my tent and look for shelter under a roof.   About 3:00 am, I went to sleep into my sleeping bag under a truck so I could protect myself from the rain, but the police arrived, they asked for my documents and began to ask me why I was doing that.

We spent some time discussing about how bad was travelling like that. According to the officer, spending a bad time. I tried to explain that sometimes the travel is harder but I think he didn’t understand me. The man looked at me seriously as saying : “You’re not well, guy”, and adviced me to take shelter in some changing rooms in a playing field that was behind the petrol station. It was a long night, and I didn’t sleep well, but the following day the sun shone again.

At noon, I arrived to Castellón and bought some stuff for the bycicle, I had lunch and went on to camp somewhere by the road. As I hadn’t slept well, I looked for a camp site, and you know what they told me?: “We are full”; “We ran out of water”, or “We are reforming the place and only lodge local people”.

If I hadn’t been uninterested I would have thought they didn’t want me there. Generally, camp sites in the golden coast of Spain lodge trailer houses with people from the north of Europe, all clean and blond, so I think a little sweated latinamerican on a bike didn’t match with the prototype of these travellers.

Anyway, I wasn’t interested: the price was over 13 euros and that was a lot of money for a piece of land for my tent and a bathroom.

I ended up sleeping in another petrol station with some Pole truck drivers who were travelling to the south of Spain to load their trucks, and, although it was difficult to understand each other, they were nicer than the owners of the camp sites in the golden coast of Spain. 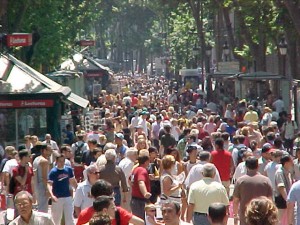 I arrived in Barcelona from the south, after biking along the road that comes from Sitges, an area of cliffs where there are several nudist coves. In the evening I stayed in a hostel whose owner had travelled by bike around Argentina, we understood each other at once and I felt at home. There I met Pepe, now a friend.

Barcelona is a cosmopolitan city, there are people from everywhere, on holidays, working or simply wanting to settle down there just because it is Barcelona, like that Argentine guy Lucas, a newcomer young man full of dreams who always called me to go out; or that other guy who was trying to get his papers through a not very clear marriage.

It was very beautiful to walk along the rambla, the most famous avenue of Barcelona. It’s animated during the day and night, for me it was like a museum of characters that, with their originality, amuse walkers, tourists and curious people. 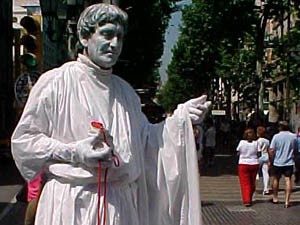 There I met a man who performs Julius Caesar, another argentine guy with a lot of charisma who knew how to attract people’s attention; and Chucky, who made everybody smile; and there also were an argeline guy dressed with flowers and the tourists stopped to take pictures with him; and a white King Kong and another black one; and a goblin, and even a Che Guevara.

They were all living statues, characters of the rambla; and I stayed several days with them, with my bike, my pictures and my little dolls. In this way, I earned some money, at least to go on a little farther.

It was funny and I met people who gave me a lot of addresses to visit. I also met people to whom it was nice to talk, even nicer than a good sale. Barcelona will be one of my best memories of my travel.