When I arrived to Istanbul, I was surprised, because in spite of their dozens of mosques that exist at first sight it doesn’t seem a Muslim city, mainly for its youth that more and more they forget about their religion and their traditions 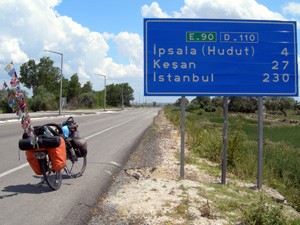 Finally I entered in Asia… and the weather was too hot; … and in spite of the fact that I arrived with the right foot; the beginning of this new continent was quite hard. I didn’t take care of myself during the last weeks in Europe, perhaps because I felt that after two years in the old continent anything could happen me. But I was wrong.

I still remember when selling my pictures in Athens, I dropped the speedometer of the bicycle to the rotten water and I picked up it in front of that Dutchman who then invited me with coconut, and who like a mother order me to pay attention for eating it with my dirty hands. “It is ok, I am already immunized”, I told him ironically.

In that way I travelled through Greece, drinking tap water and eating in not completely places hygienic. I felt remorse by the Argentinean girl that I knew in the youth’s hostel in Athens, to whom I called to eat together in that restaurant one night. The following day she had to be interned; and I can’t believe how I have eaten there during the 20 days that I stayed in the city.

By this way I passed the last weeks in Greece, believing that my stomach’s pains were fleeting, or maybe that they were still symptoms of my last days in Italy. In Santorini I went to a doctor, but he said to me: “don’t worry, you must to drink mineral water and you will be better”. But in route to Istanbul, I convinced myself that I was not really well, because the last days every time that I went to bed, I felt bad and I took a long time in falling asleep. 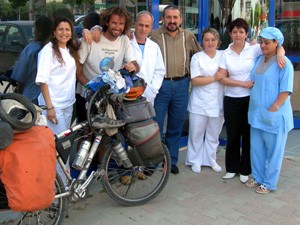 For this reason, still on the route, I stopped in another clinic, but there nobody spoke English and it was impossible to talk with the doctor who after checking my pressure wanted to apply me serum or to give me an injection, but he didn’t convince me and I preferred to continue cycling. Finally I stopped in the following town in a laboratory, where one of their doctors spoke a little English. There at once he ordered an analysis and they diagnosed me several types of bacteria, so I started to drink a stomach sedative and an antibiotic box for 10 days. But I didn’t understand him well, and my treatment was a real disaster and added to the alcohol of a couple of parties with my Turkish friends, I had to drink another box more. I hope that God helps me.

My cycled to Istanbul extended during 4 days, among several mountains that mixed with a strong wind against me. I visited Kesan and Tekirdag, among others places. And in spite of the fact that I wasn’t very healthy, the landscapes of the route made me to forget everything; there was a couple of nights that I slept in my tent and another threatened by the rain, the people of Seymenli, a small town inlands authorized me to spend the night in the mosque.

And finally after 60 km of cycling in a chaotic traffic I arrived in Istanbul. 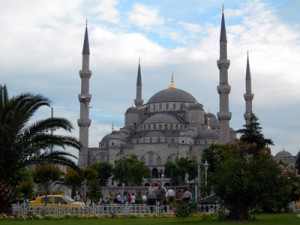 When I arrived to Istanbul, I was surprised, because in spite of their dozens of mosques that exist at first sight it doesn’t seem a Muslim city, mainly for its youth that more and more they forget about their religion and their traditions.

To my arrival I met Ezgi, a 30 year-old girl that I knew through a site of travellers in internet. She lived alone and she hosted me in her house. Along my days in the city and then along my trip through the country, talking with her, with her friends and also with another people I noticed how Muslim people in the big cities are losing more and more their culture and their traditions, how they are being conquered by occident through the capitalism, with its politics of free trade with the well camouflaged international companies that not only they are interested in selling more services to any price, but rather they are also payees of information and statistical that are surely useful to the politics of their countries origins.

I still remember the stories of Elguin, a recently graduated accountant that he always worked extras hours for a multinational company, but clever guy: “we have 150 companies as clients, which many of them are the most important companies of the country. We control them and we advise them, but also we periodically receive an international visit of the mother company who controls and teaches us; but also who takes the whole information which interests its, it is the way as it works” he told me.

It is enough to walk down the street or watch television (pornography channels included) to see how through announcements or programs, the west culture, always captained by the same ones, causes the eradication of the traditions to an entire civilization, from which we could learn a lot. Here in the Muslim countries single mothers, neither a high index of separate marriages and raised children in such a way exist still hardly. And their traditions and their religion have a lot to do with that.

But in the big cities, at the present time the Muslim youths are no longer interested about this. They prefer drink than to pray and the women to dress “up to date” than to walk cover; some people understand it like generation changes, others prefer to mention the evolution; the certain thing that none of them believes in the religion like their parents or grandparents. But all of them are Muslim because when they get their document they are classified as such, “and it is better”, Ezgi told me, “because if one opposes to be classified like Muslim and in the future he or she is called to a control in the street by the police, it will be sure a problem.” 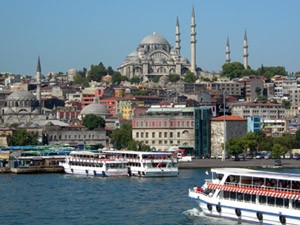 Istanbul is a giant city, they are 15 million inhabitants. The Bosporus is the channel that divides the city in two, the European and the Asian side, and both sides are united by bridges. At the same time, the channel connects the Marmara Sea to the Black sea. The city is impressive, monumental mosques, a big traffic marine and a night life as much as day. And for the tourist a very upset program if one also wants it; historical places of interest, museums, monuments and palaces, Turkish bathrooms and full bazaars with silver objects and copper, carpets and jewelleries. The traditional old neighbourhoods and back streets specialized in an occupation or trade corresponding to the old unions, the street of the blacksmiths, that of the bicycles, that of the shoes and that of the spices also exist. 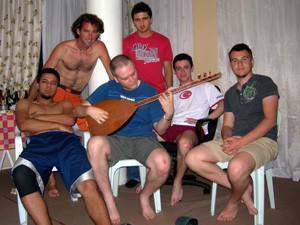 My days in Istanbul were extended during two weeks, although I travelled the city from a side to the other, I didn’t visit so many tourist places, but rather I was devoted to rest and to recuperate myself and contrary to 4 years behind, when I was in Malawi, I almost watched all the soccer games of the first phase of the World Cup 2006, with Gonench and his friends that will be engravings in my memory like my Turkish friends.